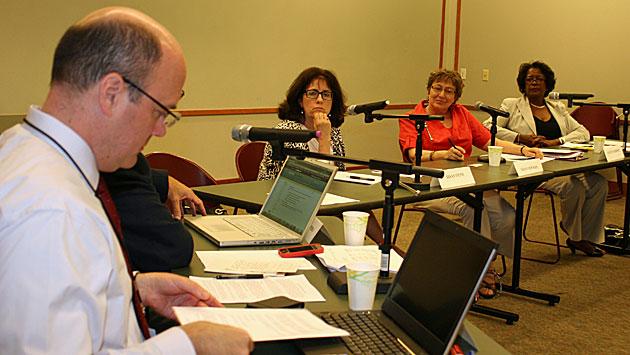 And several thousand words later, it appeared that support for keeping the north branch library open may be weakening — at least among the five members of the nine member board who showed up for the meeting.

Library administrator Paul Gottschalk said the staff needed guidance from the board about how it would rank four priorities:

Gottschalk noted that the board is scheduled to adopt its first  budget independent of the City Council by Sept. 15, but so far has only preliminary, staff-prepared budget documents to go on.

But he provided little explanation for why the new budget shrinks spending on children’s services by 16 percent or spending on adult services by 10 percent, or for most other changes from the July document.

Despite the changes, board member Diane Allen described the new document as “basically exactly the same thing” the board discussed in July.

The meeting started a half hour late because board chair Susan Newman forgot about the earlier-than-normal scheduled start time, and ended abruptly at 8:30 p.m. when member Susan Stone had to leave and the board lost its quorum.

But in the time they had, board members seemed to be leaning toward placing the highest priority on maintaining services at the downtown library, and if possible spending more to expand the book collection there and spruce up the appearance of the building.

“I’m really disappointed with the collection in this building,” Allen said, adding that she has more luck finding new books when she visits the Winnetka library.

“And this place looks seedy in many ways,” she said, “I know we’re not going to be able to do major renovations, but we can do minor facelifts so we can get the place clean.”

“When I look at the decline in our circulation numbers,” Schapiro said, “We have not done a good job of recruiting future readers, the young people of this community wherever they may be.”

Schapiro suggested he was less concerned about making immediate physical improvements to the building. “This is an excellent library,” he said, “although we do need to burnish the pieces that have taken some hits.”

Stone said she agreed on the focus on collection building and community engagement.

“On the north branch,” Stone said, “The jury is still out. I understand how great it is for business and real estate in the neighborhood, but we all have to prioritize.”

“When I go in the store and have a buck, do I buy a candy bar, or bandaids because my kid has a hurt knee?” she added.

Schapiro said the board needs to decide what represents good library service to the whole community.

He suggested a bookmobile might be a way to move resources from place to place and provide full service across the community.

Board member Lynette Murphy said pitting different parts of the community against each other “is just so disturbing.”

“We need to go back to our mission statement,” Murphy said, “and determine what’s best for the entire community.”

The board is scheduled to meet again to discuss the budget at 6 p.m. on Wednesday, Aug. 31.

At the meeting it was also announced that: