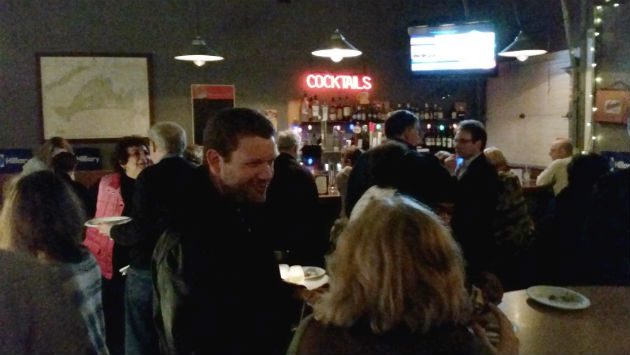 The Democratic Party of Evanston — which has endorsed Hillary Clinton in the presidential content — was holding a party at Prairie Moon on Sherman Avenue downtown. 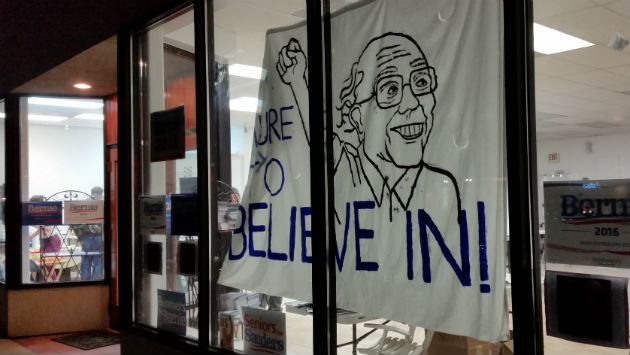 Update 8:01 p.m.: A cheer went up at the DPOE gathering as it was announced that Clinton had won the primaries in Florida, North Carolina and Ohio.

At this hour Clinton appears to be carrying suburban Cook County with 53 percent of the vote with a little under one third of the precincts reporting, to 46 percent for Sanders. Clinton was also leading with a similar margin in the City of Chicago.

Update 8:10 p.m.: On the Republican side, Donald Trump was leading the suburban Cook County results with 41 percent of the vote to 25 percent for John Kasich and 23 percent for Ted Cruz — with about a third of precincts reporting.

Update 8:17 p.m.: Reports are that early voting in Cook County and Chicago was much higher than in the last presidential primary four years ago, and reportedly the bulk of early voters were in the over-50 age group, considered to strongly favor Clinton. Clinton is maintaining her lead at just under 53 percent of the total with 639 of 1,599 suburban Cook precincts reporting.

She has nearly 54 percent of the Chicago vote with 1280 of 2,069 precincts reporting. And that matches her performance statewide so far. But only about a quarter of precincts statewide have reported.

Update 8:25 p.m.: Trump continues to lead in the Republican presidential primary with 41 percent of the vote statewide with 23 percent of precincts reporting. That's also approximately how he's doing in Chicago and suburban Cook County returns.

Update 8:40 p.m.: In the hotly-contested Democratic primary for Cook County State's Attorney, State Rep. Robyn Gabel of Evanston told the crowd at Prairie Moon that Evanston had put the candidate the DPOE endorsed — Kim Foxx — over the top.

Update 8:45 p.m.: Evanston Democratic Committeeman Eamon Kelly says it's still hard to tell, but it appears that Evanston voters went for Hillary Clinton in the presidential race, though by a fairly narrow margin.

Election results broken out by precinct aren't expected to be released by the County Clerk's office until sometime tomorrow.

So it will be Duckworth versus Kirk in the general election for the U.S. Senate this November.

Update 9:00 p.m.: The Associated Press has declared Donald Trump the winner of the Illinois Republican presidential primary. In the actual vote count Trump has 40 percent of the total with the rest split between Cruz and Kasich with 39 percent of precincts reporting. Trump has also been declared the winner in Florida and North Carolina, while Kasich has won his home state of Ohio. Trump is leading in early returns from Missouri.

The Illinois Democratic presidential primary is still considered too close to call, with Clinton having a 6 point point lead over Sanders. Sanders is leading in many downstate counties but Clinton is ahead in most of the Chicago metro area. Clinton has won in Florida, North Carolina and Ohio, while Sanders has a lead in Missouri.

Update 5:40 a.m. 3/16/16: By shortly after 9 p.m. the crowd was thinning out at Prairie Moon. Clinton's lead in the Illinois Democratic primary diminished but didn't disappear as the remaining returns came in through the night. This morning, with 99 percent of the precincts counted statewide, Clinton held a 2 percent margin of victory over Sanders.