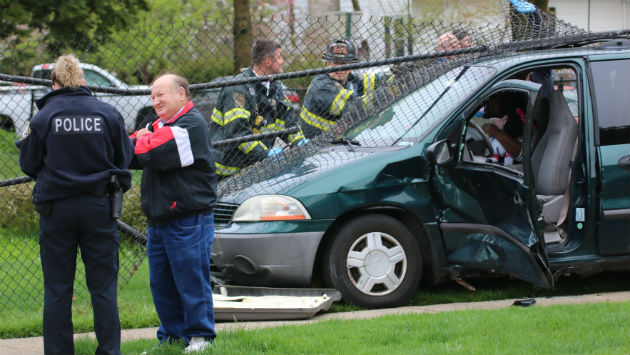 A two-car accident with injuries that happened just before 8 a.m. blocked traffic in both directions on Dodge Avenue in Evanston between Emerson and Simpson streets.

The crash, at the intersection of Dodge and Foster, sent one of the cars off the road and through a chain-link fence surrounding the large side yard of an apartment building on the northwest corner of the intersection.

The two ambulances dispatched to the scene ended up transporting three people to Evanston Hospital for treatment of their injuries.

Update 8:40 a.m.: Northbound Dodge has just been reopened to traffic, but southbound traffic remains blocked for a while longer.

Update 3:05 p.m.: Police Cmdr. Joseph Dugan says the accident occurred when the 66-year-old man driving a Ford minivan westbound on Foster tried to cross Dodge and was struck by a northbound Nissan SUV driven by a 48-year-old Evanston woman.

The driver of the minivan, Dugan says, was cited for failing to yield to oncoming traffic. Injuries from the accident turned out to be minor.