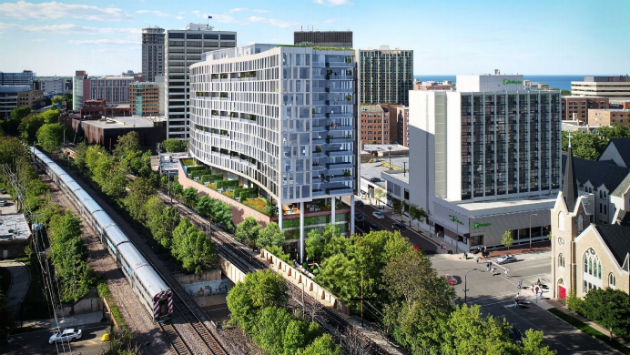 The Evanston Plan Commission voted 4-2 late this evening to recommend that the City Council approve Albion Residential’s plan for a 286 unit planned development on the northwest corner of Sherman Avenue and Lake Street.

The approval came after Albion’s Andrew Yule announced that, after talks with affordable housing advocates, he was willing to provide 15 on-site affordable units in the development.

The city’s community development director, Johanna Leonard, indicated such a solution could be “an alternative equivalent proposal” as allowed under the city’s inclusionary housing ordinance.

The ordinance offers two standard ways of meeting the affordable housing goals — either by making one of every 10 units in a development affordable, or by paying an in-lieu fee to the city of $100,000 for each affordable unit not provided on site.

Affordable housing advocates have complained that the in-lieu process leaves it uncertain when affordable units will actually be built and makes it more likely that they will be build only in lower income neighborhoods.

But developers say the cost to providie a unit on site units is at least twice the in-lieu fee — making it financially infeasible to provide all the desired units on site.

The Plan Commission conditioned its recommendation in favor of the project on the developer providing a minimum of 15 affordable units in the development, with a mix of studio, one-bedroom and two-bedroom units equivalent to the overall unit mix in the project.

Commisison Chair Jim Ford and Commissioner Andrew Pigozzi voted against it. Pigozzi said he had several concerns about the design of the development.

Residents testifying at the commission hearing were split on the merits of the development, with some saying it was too tall and had too little parking, while others said it would bring much needed new customers to downtown businesses.

The project now moves to the City Council’s Planning and Development Committee, which is likely to begin its review of the project on Monday, Oct. 9.