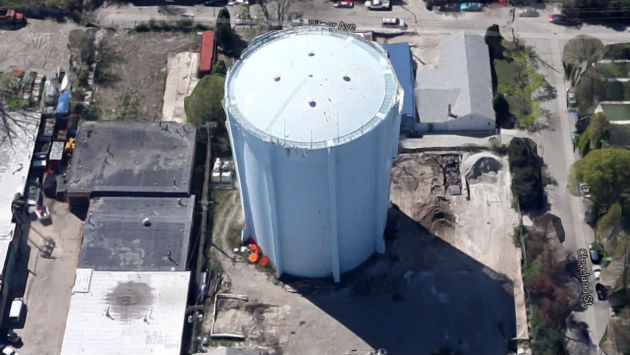 The meeting is scheduled to start at 6 p.m. A packet with information on tonight's agenda items is available online.

Alderman Peter Braithwaite, 2nd Ward, says he is looking for improvement to sidewalks and the entrance to the Main Street Commons shopping center. The center has just about come to the end of its tax sharing agreement with the city — over $300K in rebates to Kapsum Property, the development owner, is on the bills list tonight.

Assistant City Manager Marty Lyons says some improvements for that area are in the works.

A 3.1 – Washroom renovation contract at Levy Center with Construction Consulting and Disbursement Services of Morton Grove, $45.5K. Approved … after lengthy discussion about how to get more Evanston businesses to bid on such projects.

A 4.2 – Repair and repainting of standpipes. No price change but time extension from Nov. 19 to Dec. 21.

Public Works Director Dave Stoneback says has heard those complaints. Says if they don't work weekends they won't be able to finish this year. Says there's been a whole lot more rain this year than contractor had anticipated.

Laura Biggs, Superintendent Utilities, Construction/Field Services, says hope to have sandblasting done by mid-November. Hope to finish all the work by Thanksgiving. Says would be more expensive if have to come back next year.

Says on Sunday they were running multiple crews working on the exterior pilasters. Says that's the noisiest part.

Says hope to come up with better solution over the next day or two.

A 5 – Contract extension with Groot Industries for Solid Waste Collection.

Braithwaite says meeting with Groot went well — complaint information from 311 with "heat maps" of complaints — impressed them and hopes it will lead to to better service.

Braithwaite says Groot is equipping its trucks with iPads so drivers can take pictures of overflowing garbage cans on the weekend — when city inspectors aren't available.

Lyons says looking to increase recycling to reduce the amount of trash. Also says it costs Groot a lot when driver has to take extra time to clean up after a messy dumpster.

Grover praises the use of 311 data and the heat maps to improve the service.

Lyons says looking to add extra detail to the 311 reports so can get better respons.

Lyons says got decrease in rates increased from 10% to 12% and an even bigger discount for frequent users of roll-off dumpsters.

One speaker praises the proposal as supportive for transgender residents.

Alderman Jane Grover says there are 30-plus transgender students at ETHS — the ordinance is needed.

Mark Muenzer, director of community development, says info on the change would be sent out with business license renewals next month.

Approved, with motion to suspend the rules to give final approval tonight.

A 9 – Grove street parking prohibited …all times on osuth side from Wesle to Ashland avenues … near Dewey School. Approved, with motion to suspend the rules to give final approval tonight.

A 10 – Grove Stree residnet only parking from Asbury west to the alley … also near Dewey School. Approved, with motion to suspend rules to give final approval tonight.

Planning and Devleopment Committee meeting to start at 7:15 p.m.