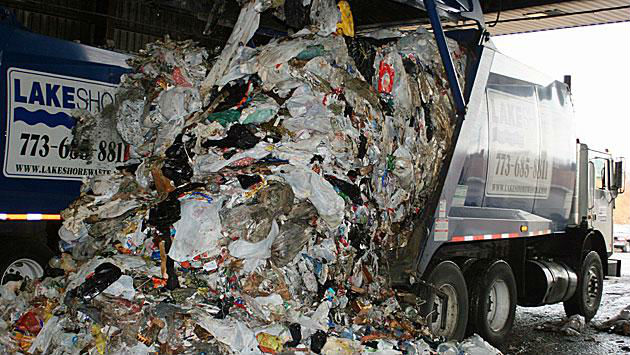 The meeting is scheduled to start at 6 p.m. A packet with information on tonight's agenda items is availabel online.

Cindy Leavitt, resident of Church Street Village, urges council to require Advance Disposal to conduct air quality inspections of area around the transfer station. Also says fee should be kept at $2 per ton, rather than being reduced to $0.75 per ton.

Janet Alexander Davis calls for language to be added to the agreement to protect neighboring residents.

Rick Nelson, 2670 Prairie, says the host agreement fee is too low compared to those charged by several other community. Says residents near the station haven't been sufficiently consulted about the settlement proposal.

Several speakers raise objections about the proposed revisions to the nuisance premises ordinance.

A 4.2 – Standpipe repair and repaining change order — increasing cost by $232K. Extends completion date until May 31.

Public Works Agency Director Dave Stoneback says city paid to house workers during bad weather that extended the time required for the project. Says needed to do that so could get the south standpipe prepared to be refilled over the winter. This is the first time the standpipes have needed such extensive work since they were constructed in the early 1980s. Hope won't have to do it again for another 30 years.

Says local sponsorships should raise $287K and have $320K in grants.

Knapp says Arlington, Va., makes back about half of its cost in revenue.

Says Chicago isn't turning a profit at this time.

City Manager Wally Bobkiewicz says they are "two large health care facilities" and "a grocery store known for its produce" are among the sponsors on tap.

Says believes once the system is in place it will be a lot easier to get additional sponsors. Believes the connectivity with Chicago will help make the system successful.

Approved 3-1. Miller votes no, saying it's too expensive.

A 7 – Settlement with Advanced Disposal

City Attorney Grant Farrar says the station has operated since 1984 under license from the Illinois Environmental Protection Agency — is "grandfathered in" under old rules. Says city has been litigating the case in circuit court since Dec. 2010 … have been several nuisance cases in Skokie district court city has won some of those, lost others. Says now at a point where court is insiting that the case either be settled or go to trial. Will be depositions and discovery if no settlement.

Says law department plans to continue to manage the litigation in house.

Says since last time the settlement has been revised to include a schedule for fee escalation … went back and forth about terms of that.

Alderman Peter Braithwaite, 2nd Ward, says use of 311 system has helped track complaints about the station and that there's been considerable mitigation of the smell from the transfer station.

Alderman Brian Miller, 9th Ward, says this appears to be the best of a bad situation — could lose the lawsuit.

Farrar says "past performance is no guarantee of future results." Outcome is always very uncertain.

Miller: "Still is possibility we could lose?" Farrar: "Absolutely."

A 8 – Host agreement with Advanced Disposal. Approved 3-1. Holmes votes no.

A 9 – Repeal of prior waste transfer station fee ordinance. Approved 3-1. Holmes votes no.

Alderman Ann Rainey, 8th Ward, says vote here is only to move the issue to full City Council for its review.

Rainey asks whether could pass the neighborhood integrity ordinance and table the rental licensing ordinance?

Says nobody wants crime in their neighborhood. But says some of the writing in the ordinance is very unclear

Says ordinance refers to "after an arrest." Ask whether that refers to an indictment or conviction?

Farrar says are trying to get into the issue — has to be more than an arrest — either a bystander report, after action report, police canvassing, etc.

Says its certainly not a conviction though.

Says a felony case can drag on for long time.

Rainey says she's expressed concerns about this in the past — says ordinance requires that the event have taken place on the property — in her ward, she says, the bad guys tend to do their deeds away from home.

Braithwaite suggests moving the issue onto council — expects further debate there — says the crowd hoping do speak on it is growing.

Vote is to move it forward to City Council

Alderman Miller says he's going to vote against the ordinance.

Rainey says will vote to not even introduce it. Says it's not ready.

Says she helped write the landlord tenant ordinance — but doesn't like this.

Says can be talked into the nuisance premises ordinance if it's fine-tuned .. .but doesn't like this at all.

Vote is 2-2. Goes to City Council without a recommendation.

Planning and Development Committee meeting to start at 7:35 p.m.