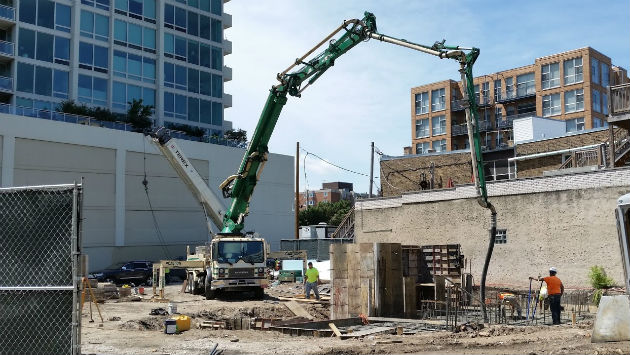 Aldeman are scheduled to act on a lease at the city's Maple Avenue Garage to provide parking for the 1571 Maple Ave. rental housing development and consider a proposal that would require owners of large buildings to benchmark their energy usage. Nearly two dozen items are on th A&PW committee agenda tonight.

Alderman Holmes is recovering from knee surgery, so she's attending the meeting by phone. Aldermen Braithwaite, Rainey, and Wynne present at the Civic Center.

Dan Schermerhorn, on Energy Benchmarking, says ordinance is not necessary. Shows property owner where energy dollars are being spent. Says owners way ahead of the issue for the past 30 years — looking to reduce usage of utilities. Pproperty owners know full well the cost of energy and ways to reduce those costs. Says don't need to gather data, send it to the city and then have them send it back to us. Says city already tracks water usage — so would just be giving back information already have. Says city could better spend its money elsewhere.

A 3.6 – CDBG street resurfacing and SNAP lighting contract with A Lamp Concrete. Approved.

A 4 – Agreement with Moran Center for "certificate of rehablitation" program. Approved.

A 5 – Grant application for Chi-Cal Rivers Fund $100K for cleanup along canal bank. It's an amazing grant, Rainey says. Approved.

A 9 – Five year lease agreement with Enterprise Leasing for 1810 Maple Ave. in the city garage. Approved.

Braithwaite says he's gotten a couple of calls from businesses saying they don't agree with it.

Says city issues the water bills — so should know information about that arleady.

Would assume ComEd should be able to do the same thing now that have Smart Meters. Says he's searching for value here.

And concern about the penalty provisions in ordinance.

Kumar Jensen, the environmental projects coordinator in the city's Public Works Agency, says each utility has different process. Says most of time cities use a free online software program called Portfolio Manager. Says ComEd has been doing that process for 12 years now.

Says the software helps people understand what the performance means, by inputting building characteristics. Can compare over time and to similar properties.

Rainey says she agrees with the goal, but says large building owners are already watching those cost numbers like a hawk.

Says if not you're either very rich or very stupid.

Says she thinks it will be a burden on property owners. Says would like to see the city track the information. Says it's a wonderful idea, but thinks will be tremendous resistance. Says fines make no sense at all. Says there's got to be another way.

Wynne says is there a way to incentivize people to do it, rather than imposing fines.

Jensen about 19 other municipalities have similar ordinance. Says all have fines in their ordinances, but none have levied them.

Says City of Chicago has worked with not-for-profits to provide assistance to building owners.

Wynne says don't want to have city coming across as too heavy handed.

Braithwaite moves to remove the fine provision and wants staff to do more outreach to residents.

Says also need to understand what are getting from utilities already.

Rainey agrees with Braithwaite's move to hold the ordinance.

Jensen says ComEd and Nicor say they won't release data directly to the city — has to be requested by the property owner.

So ordinance is held until next meeting.

A 11 – Revision of taxicab regulations.

Corporation Counsel Grant Farrar says will be no fee for taxi medallion renewals.

Rainey asks what state would do if they can't find a driver. Says city is doing as much as can to bring taxi industry in line with the transportation network providers.

Owner asks what age limit for cabs is. And whether can renew medallion without having a registratin.

Farrar says all the restrictions on car age are being dropped from the ordinance. Says now will rely on the state's vehicle safety test.

Medallion owner says "it's a fight out there now" between taxi drivers and Uber drivers.

More pubic comment … Mike Decker … another driver … says thinks there's a better way than the coupon system the city uses for seniors. Suggests different coupon denominations and using meter rates as base. If driver's getting full fare, then not a problem.

APW 1 – City use of pesticides

Presentation by Paul D'Agostino. Environmental Services Bureau Chief, also says city is experimenting with the use of a vinegar solution as an alternative to some pesticides.