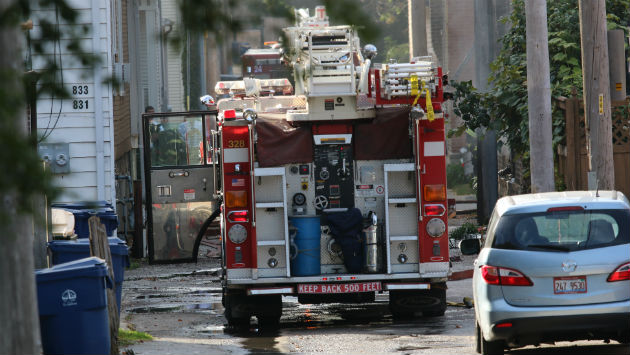 Here's a recap of our live coverage of this evening's Evanston City Council Administration and Publi Works Committee meeting.

To provide 15 disconnected and unemployed young adults with a career pathway plan. $80,000.

Aldermen Rainey and Wynne say the program appears to be a bargain, given its level of success.

Carl Bova urges expansion of job training programs (which was item A3.1) — to include skilled trades apprenticeship programs. Says city should spend about three times as much on the program and get the additional money from the affordable housing fund. Says is direct correlation between pay level of jobs and people's ability to find housing in Evanston.

A 3.4 – Topographic surveying contract $39K with Hampton Lenzini and Renwick of Elgin.

Alderman Rainey suggests using the $28K from the Howard-Hartrey TIF for water main replacement instead of sewer rehab.

Says there's no need to use this money for that.

Public Works Director Dave Stoneback says he doubts there is money in the sewer fund.

City Manager Wally Bobkiewicz says can try to find another source of funds for the project.

Alderman Brian Miller, 9th Ward, says there's no plan to use the money for remediation — it's just a "might do" that haven't had any thoughts about — doesn't think could address in the next three months.

Bobkiewicz says if can come up with a remediation plan before then end of the year and the TIF's expiration, will do that.

Lyons says report was prepared with the fire and police pension boards.

Rainey notes that the reference on p. 11 to a TIF should be to Howard-Hartrey, not Howard Ridge.

Jason Franken, from the actuarial firm, says big increase in payment is from a change in the mortality table.

Says plan to do a study over then next couple of months to provide a longer-term view of where the two pension plans are headed over the next 15 to 20 years.

Lyons says state proposed funding levels would be completely insufficient to meet the funding needs of the plans.

Franken agrees — says important to meet obligations today rather than defer them into the future when the money may or may not be available.

Tim Schoolmaster, president of the police fund board, says many other pension funds have suffered lower return rates in recent years. Says believes the police pension fund here is doing well with what it has.

Deron Daugherty, president of the fire pension board, says pension boards and city staff have worked well to give the council good information.

Says pension underfunding is a 30 to 35 year old problem and will take the same amount of time to work out of it.

If you follow the state's guideline, he says, you're buying a balloon mortgage, the debt is not going to go away.

Says other communities are making unrealistic assumptions to show funding levels that are higher than those in Evanston.

Says are on the right path.

Says pension debt for police and fire is $185 million or more.

Says 6.5 percent assumed rate of return is probably at least a percentage point too high.

Says the unfunded pension debt was $145 million in 2008 … it's grown substantially since then.

Lyons says has changing both the mortality table and inventment return assumpstion it would add more than $1 million in additional payments required.

Franken says cutting the assumed rate of return by a quarter percentage point adds about $1 million to the payments required.

Includes 2 percent salary increase retroactive to the start of the  year. And a reduction of the manager's home loan from $190K to $180K.

Junad Rizki repeats complaints about the water department and other issues.

Says have spent over $1 million on the litigation over contamination at James Park.

Betty Sue Ester also objects to the pay increase for the city manager.

Miller says he'll vote against the contract because of the change in the home loan terms.

Approved 3-2. Miller and Braithwaite vote no.

Corporation Counsel Grant Farrar says municipalities are getting a lot of requests for small cell towers on top of utility poles.

Says staff is working on draft ordinance for introduction at next City Council meeting.

Competing desires — for improved internet coverage — but need to have safe infrastructure and a consistent permiting scheme.

Says plans to bring pictures of what the objects look like. Usually they're placed in an alley on a ComEd pole, he says, and may stick up eight feet or so above the top of the pole.

Public Works Director Dave Stoneback says Dempster and Dewey request was denied by IDOT a year or so ago. Says proposing a bump-out at the crossing at Dempster and Ashland.

Alderman Wynne says even with a bump-out she's concerned drivers won't be aware. Asks if could do a flashig yellow light.

Stoneback says could look at that.

Wynne says given the distance between the lights at Dodge and Asbury need to have some additional warning.

Braithwaite says he supports the Dempster idea. Wants to know if could do something additional on Main Street.

Alderman Don Wilson says he supports the Dempster proposal — have kids going back and forth to schools and Penny Park.

Alderman Delores Holmes says she thinks there should be one at Church and McDaniel — has been asking for one for years.