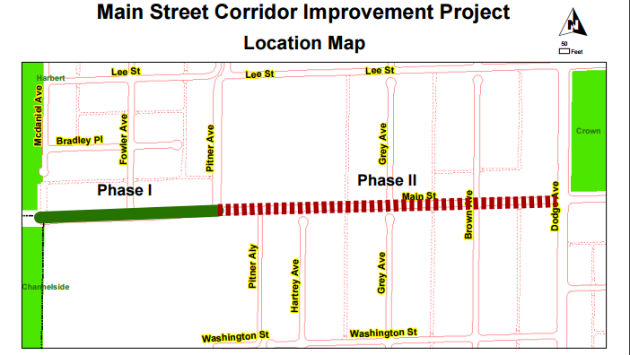 Here’s a recap of our live coverage of this evening’s Evanston City Council Administration and Pubic Works Committee meeting.

Among the items up for approval tonight is an engineering design services contract for the Main Street Corridor Improvement Project. The project started last year with a $75,000 topographic survey and data collection effort. For this year the contract calls for spending $175,000 to do engineering design work.

Covers police and fire facilities and the civic center.

Alderman Ann Rainey, 8th Ward, asks what the concerns were with current company.

Rainey asks about hiring Evanston residents to do the work.

Says wish that had been addressed in the report from staff.

Rainey says the vendors may be too big to be Evanston-based.

Deputy City Manager Erika Storlie says could ask the vendor to try to hire as many Evanston residents as possible.

A 3.3 – Pre-qualification of five contractors for cured-in-place pipe rehabilitation of sewer mains.

Rainey asks about variation in techniques used by the different contractors. Some use hot water others use steam, some use both.

A 3.5 – Change order for Penny Park Renovation with Elanar Construction.

Lara Biggs, bureau chief of capital planning, says there were a number of underground issues. Says had been building on site — threw layer of dirt over and put in the playground. As did excavation for new work found rubble that had to be removed. Then some weather delays as well.

Rainey says she has doubts about the accuracy of the weights calculated.

City Manager Wally Bobkiewicz says haven’t been any changes to the membership of SWANCC over the past seven-plus years that he’s been the city’s alternate delegate to the SWANCC board.

Stoneback says for a while recycling was increasing and decreasing trash amounts — but that pattern has reversed in recent years. So total quantity of trash is increasing.

Stoneback says contract with Groot ends 3/4 of the way through this year — will be looking at other alternatives.

Bobkiewicz says there’s a problem at many multi-family buildings that there’s not space to store recycling stuff.

Says a lot of multi-family property owners aren’t interested because of the cost.

Single-family recycling, he says has been pretty steady.

Stoneback says staff is working on a request for proposals. Will bring to City Council before sending requests out to vendors.

Rainey says Chicago just past requirement making it illegal for rental buildings to not recycle.

A 4 – Authorization of construction on state highways.