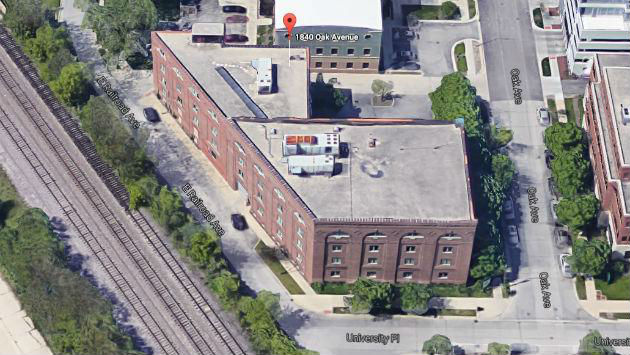 One major topic on tonight’s agenda is expected to be Northwestern University’s purchase of the office building at 1840 Oak Ave. downtown.

Request from staff is to receive a preliminary report tonight and then discuss it at the March 13 meeting.

Braithwaite says there are a lot of moving pieces to the transaction. Rainey says it can’t be ignored.

Motion is to accept the report and continue the discussion on March 13. Approved.

A 3.2 – Water supply agreement updates with Skokie and Lincolnwood.

City Manager Wally Bobkiewicz says staff is talking with Skokie about a short-term contract extension until the end of this year.

Says have not agreed yet to any adjustment to the rate. Says existing rate has not been beneficial to Evanston for an extended period of time.

Says plan to come back before the end of the month so water services can continue beyond the end of this month.

Next council meeting is on Feb. 27.

On Lincolnwood, says are discussing water sales again with that village, hopes to have some agreement in the spring.

Alderman Rainey asks whether Skokie is being reasonable.

Bobkiewicz says there’s clearly a difference of opinion about the value of Evanston water. Trying to come to an agreement. Not there yet.

Says the larger question is the new long-term agreement.

Says Skokie’s distribution system is tightly interconnected with Evanston’s — with three delivery points. Dispute now is over the cost of the distribution cost.

If Skokie were to take water at just one or two connection points, that might reduce the rate to Skokie.

Says Evanston has made clear for the past couple of years that any new contract needs to property cover the distribution costs.

A 3.9 – Conversion of retired ambulance to underwater rescue vehicle.

Rainey expresses concern about disparity in new bid from existing contractor than the new one.

Company reps assure aldermen that they can do the job.

Hank Goldman of the condo association says the problem has gotten worse since the issue was last discussed two weeks ago.

People having trouble getting in an out of the parking area.

Rainey says this is the same conversation we had two weeks ago. Says should consider finding another contractor.

Eric Risch, president of Automated Parking Technologies, says should be able to complete the upgrade within the next two weeks.

Says the new system is less convenient than the old one. Old system used a Easy Pass-style transponder. New system uses a license plate reading system and a proximity card system for backup.

Alderman Judy Fiske says 303 parkers are being inconvenienced. Says initial system worked fine. Then decided to replace it. Says new system doesn’t work well either for the the residents or other parkers. Doubts any of the fixes proposed will work — other than spending the $140K proposed. Says should move the change order on to council for approval tonight.

Voss says there haven’t been problems for the monthly parkers who aren’t residents of the condo tower.

Company owner says even after changes some small percentage of drivers may still have to get out of their cars and use the proximity cards to get in and out of the parking area.

Voss says none of the vendors promised 100 percent effectiveness for the license plate reader system.

Cost of the additional system would work out to about $462 for each of the 303 residents of the condo complex.

Committee splits 2-2, which sends the debate to the City Council

A 4 – Lease of 50 spaces at Church Street garage to NU. One year term. Approved.

A 5 – Lease of 150 spaces at Maple Avenue garage to NU. One year term. Approved.

A 6 – Resolution advocating repeal of preemption of local government regulation of pesticides.

Existing statute is from the 1970s. Says has been no discussion so far of any local pesticide regulation in Evanston.

Discussion item on residential solid waste request for proposals postponed until next meeting because of the late hour.