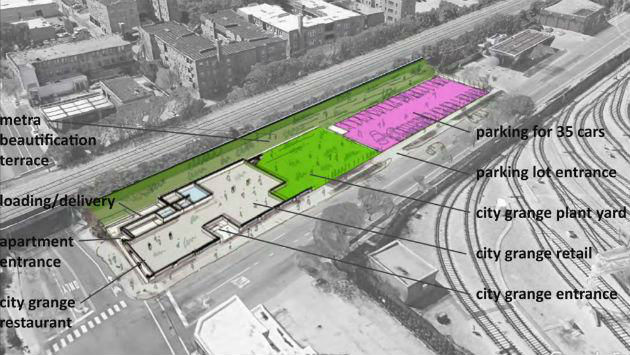 The committee is scheduled to consider a proposal for a city subsidy to a proposed development at Chicago Avenue and Howard Street, an increase in parking meter fines and a proposed sculpture at the Green Bay, Emerson, Ridge intersection. 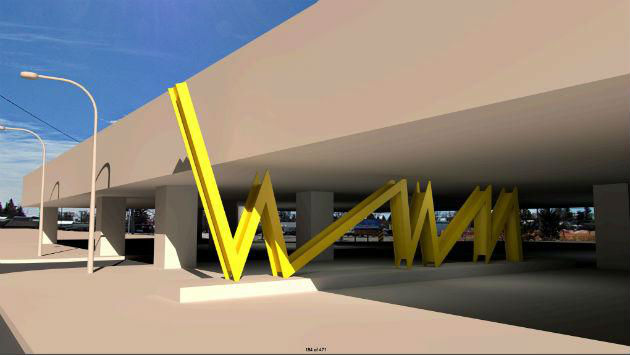 A rendering of the sculpture.

Alderman Tom Suffredin, 6th Ward, asks if there would be any extra cost if the installation was postponed.

Jennifer Lasik, arts coordinator, says there’s no extra cost, but money has been set aside for this project this year.

Alderman Cicely Fleming, 9th Ward, asks about risk of getting graffiti on it.

Dino Robinson of the Arts Council, says haven’t seen any increase in graffiti on public art.

Alderman Peter Braithwaite,2nd Ward, says sculpture will look nice but the viaduct “looks like crap.” What to do about that.

Dave Stoneback, public works director, says city has been talking to the railroad and he thinks they’re close to working out an agreement that would let the city paint the viaduct — at the city’s cost. Hadn’t been able to get that permission in the past. Hope will be able to paint other viaducts in town as well.

Alderman Robin Rue Simmons, 5th Ward, says thinks the art will be a welcome addition to the neighborhood.

Assistant City Manager Marty Lyons says the fund would be managed by the city. Says goal is to make sure the center will last. Major donors have been concerned about that. Says at some future point will need to issue bonds again, after the bonds to be issued for construction have been retired.

A 5 – Agreement with Moran Center for Certificate of Rehabilitation Program. Approved. 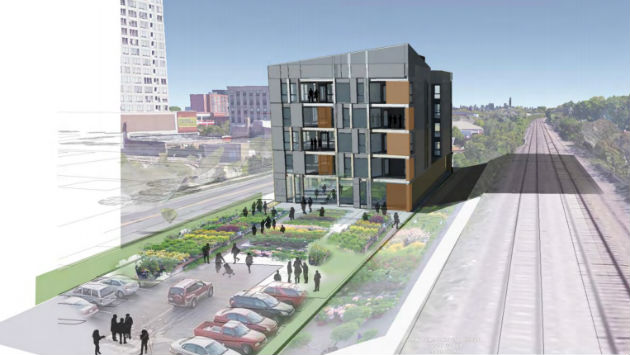 Says project hasn’t been reviewed by the Housing and Homelessness Commission. Also says all the units would be at 80 percent of area median income, when the city’s inclusionary housing ordinance calls for having some at 50 percent and 60 percent of AMI.

Fleming asks if would move forward with the project without the additional four affordable units?

Brown says could look at that. Says city seems to be having a challenge finding units for the residents and thinks it’s a good part of the proposal.

Rainey says has been controversy about developers NOT putting affordable units in their building. By accepting the city offer to put four additional units … has to do five on own. If only had 20 total units would only have needed four units.

Says would be silly for any future developer to put affordable units in your building — now have to go to housing and homelessness committee to get reviewed — think that’s interesting. Says any developer who’s not doing it on site should have to go to that committee.

Says 831 Emerson is required to pay $2.4 million into the affordable housing fund. This project will be drawing some money from that.

Says but for the TIF this building would never be built.

Says the TIF money can only be used within the TIF district — Ridge and Howard to Chicago and Howard. Says there’s no other area in the district that needs that money at this time.

Says a few weeks ago the city committed over $500,000 to a non-profit for just two units. Says not for profits all across the country are dependent on continuing subsidies from goverment to keep them operating.

Braithwaite says he was concerned about the size of the subsidy when the project came before the EDC.

Also says the Urban Grange project will be a great asset.

Assistant City Manager Marty Lyons says if they didn’t do the units on site, then they’d have to do a $400,000 contribution to the fund.

Says price tag is always somewhere around $250,000 per unit to actually get an affordable housing development built

Rue Simmons says he’s proposing what the city needs. Says it’s a brilliant plan, she’s excited, especially about the collaboration with the gardens. But it seems unfair to put your schedule in our laps for the urgency to make a decision.

Brown says has the 128-130 property under contract in January, have extended it one time, but can’t extend it any further.

Rue Simmons should have brought it to economic development committee sooner.

Says have other opportuntiies to support affordable housing initiatives. Suggest should look at other options for spending the money.

Rainey says that if the development is sold to anyone other than an affiliated entity the loan from the TIF would have to be immediately paid back.

Fleming says talked earlier in the year about what to do with the affordable housing fund. Says this would get us into action — but don’t have a lot of time to discuss it. Gives a lot to digest. A lot of money to give and only a short period of time. Think have to be more deliberate about how we’re utilizing taxpayer money.

Brown says we’re hopeful we can make the numbers work. Says project has a wonderful social enterprise that would be a tremendous asset to the city and also providing affordable housing. Have given it the best shot.

Rainey says will never see another project like this if you miss out on it.

Rue Simmons says doesn’t want to lose it either.

Vote to send to council is 4-1 with Suffredin voting no.

A 7 – Authorizing city manager to negotiate with Harrington Brown for sale of city-owned property at 100 Chicago Ave.

A 11 – Resident parking only districts (Harrison and Prairie)

A 12 – Resident parking only districts (Prairie and Central)

Rainey suggests “amnesty” program. Says got feedback from staff that did it once before and didn’t work very well. But says it wasn’t well designed. Asks to discuss at next meeting an amnesty program. Says have $2 million to $5 million owed in outstanding parking fines.

Braithwaite says he thinks that excellent.

Says don’t want to nickle and dime residents as are dealing with the budget problem.

At some point the garbage man can only do so much

more service means for cost for the customer

May need help from the city … to fine the customer ?

Dale Griffin, member of Unitarian Church prison ministry group, says U.s. has 5 percent of the world’s population and 20 percent of its prisoners.

Ted Smuckler, manager of organizing for Open Communities, says people age out of crime. Says a 10-year look-back period is too long.

Says could have hiring reviews by a special committee composed of the city manager and others.

Fleming don’t need to hire everyone, but do need to provide second chances. Says would like to see more detail about what the case-by-case review would be.

HR manager Jennifer Lin says before 2015 didn’t even have a fingerprinting policy, Since then only one or two people have been disqualified — because they’d just been released one or two weeks ago — didn’t have any background on them. Also one person who’d had a serious felony conviction.

Says often find people who had conviction from a long time ago who have been doing well since — those are pretty easy to decide to hire.

But says may have been too liberal in other cases.

City Manager Wally Bobkiewicz suggests could come back with update on fourth Monday of September.

Bobkiewicz says city has been in the 20 to 25 percent range of residents among city employees. Says he’s the only employee who’s required to live here.

Says some other commnities in area have had some trouble implementing that for all employees.

Bobkiewicz says the city has an apprentice program in public works department, says just signed off on 4 or 5 people who were Evanston residents.

Braithwaite says have started doing recruiting for Fire and Police departments — could do that more broadly.

Lin says preference points are given to police and fire entry-level residents but not others. Says other jobs aren’t filled on a point basis, but could be options for giving other incentives.

No Planning and Development meeting tonight.