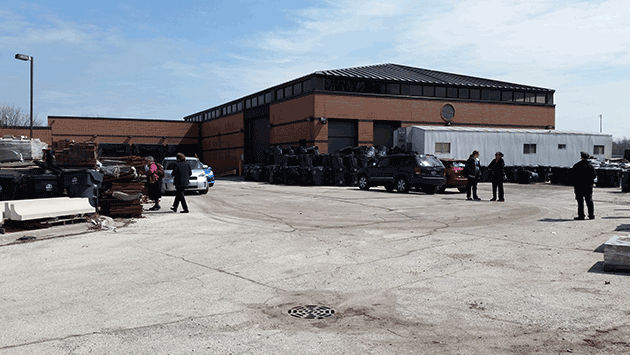 A 3.1 – Purchase of three vehicles for Public Works

Held temporarily at request of Alderman Braithwaite, who hasn’t arrived yet.

It’s to replace a vehicle that’s worn out.

Aldermen raise questions about pricing — which was incorrect at last meeting.

Business has new owner. To pay $10K to city for the contract.

Held temporarily at request of Braithwaite.

A 5 – Purchase of firefighter gear

A 7 – Termination of recycling center least with Smylie Brothers.

Jonathan Shepard, First Ascent Climbing and Fitness, says they’re interested in the property. Have four locations around Chicago now. Operate rock climbing gyms. Three years in operation in Chicago. Says typically have 200 to 500 people at their facilities each day.

Junad Rizki says city should have know the Smylie Brothers deal was going to blow up months ago. Says it cost $4 million to build the recycling center — now assessed at less than $1 million. Says city has been wasting money.

Says she asked about holding Smylie to the lease. At least something. Says loves Smylie Brothers, but they failed on this. Says city has held the property off the market for all that time.

Alderman Tom Suffredin, 6th Ward, says the number for compensation of the city should be more than zero.

Johanna Nyden, Community Development Director, says it would likely take 12 to 18 months to go through an RFP process.

City Manager Wally Bobkiewicz suggests splitting the issue into next steps for the property at next meeting, May 29 and then have staff discussion with Smylie Brothers about termination of current agreement on June 11.

Leonard says there also are unpaid property taxes on the building that Smylie was supposed to have paid.

Alderman Robin Rue Simmons, 5th Ward, says she’s not very interested in trying to work with a business that has decided not to go forward.

Bobkiewicz says RFP shouldn’t require a long process, given that have been through it once already.

A 8 – License to Comcast for building in James Park.

A 9 – Amending hours of alcohol service

… at discretion of mayor.

Bobkiewicz says believes the ordinance would be lawful.

Rainey says most localities don’t give the liquor commissioner that authority. Wants aldermen to have a say over the hours.

Braithwaite suggests referring the issue to the council’s Rules Committee.

Bobkiewicz suggests separating the action to approve the Celtic Knot’s request regarding World Cup Soccer, but postpone action on the added power for the mayor.

That is approved by committee … further discussion at full City Council later tonight.

A 3.1 – Purchase of three vehicles for public works

Concerned about low mileage of vehicles being replaced.

Fleet manager says that while the most expensive of the vehicles — which is equipped with a vacuum to clean out sewers — isn’t moving all that much, it is always idling when it’s in use. He says that amounts to having something like 250,000 miles of wear and tear on it.

Dave Stoneback, public works director, says the city’s two machines are in use every day to keep the city’s sewers and catchbasins clean.

Bobkiewicz says when he arrived nine years ago you could see the pavement from passenger seats in a lot of vehicles, they were so worn out. Says staff trying to manage the budget carefully.

Says impact of not having a Vactor to clean sewers is different from not having a sedan for building inspectors — more critical.

Rainey says sewer backups are gruesome for residents — need to have the equipment.

Braithwaite says city made promise to community years ago to address the environmental issue and restore the alleys and look at the infrastructure impact of the heavy truck traffic.

Says there was an expectation that these dollars would be available. Says doesn’t recall a vote that if moved the money to the general fund they wouldn’t be available for measuring the environmental impact or the capital needs.

Says feel blindsided. Doesn’t think should have to bond for this project — when understood the $200K was supposed to have been available.

Rue Simmons says would be an environmental injustice for the neighborhood to not do this project.

Kumar Jensen, sustainability coordinator, says had planned to start the work in January

Bobkiewicz says can spend the money, it just reduces the general fund reserves.

Braithwaite says wants the focus to be on a two block radius around the transfer station.

Rue Simmons moves that want to allocate nearly $1.3 million to the transfer station area… with the environmental study and monitoring equipment to be taken from that fund.

$1,070,748 to go to the new fund for the waste transfer station impact zone. The additional $190K will fund the environmental monitoring equipment and study.

Planning and Development Committee meeting to start at 8 p.m.