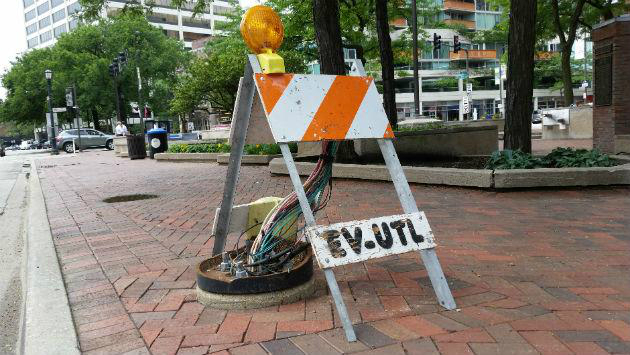 Alderman Delores Holmes, 5th Ward, asks whether these are the cheaper, fiberglass poles.

Alderman Jane Grover, 7th Ward, asks whether fixtures can be adapted to they don't shine up and create light pollution into the sky.

Maiworm says lights do have baffles on the side to avoid shining into windows, but not familiar with the situation regarding up-lighting.

Holmes says may be time to do another light study, and she also notes the use of some pedestrian-style lighting on Dodge near Evanston Township High School.

Rainey says people were used to the Tallmadge lights — which were like lighting a match — then 10 years later people started wanting brighter lights.

Holmes says people weren't thinking about safety as much back then either.

Marty Lyons, assistant city manager, says for the Emerson-Ridge-Green Bay project, coming to council in September, staff will have some suggestions for pedestrian lighting.

Alderman Peter Braithwaite, 2nd Ward, says had situation last year where a Boy Scout group had a trailer towed and it was damaged. Rickey Voss, revenue and parking manager, says under the city contract, the towing firm is responsible to reimburse cost of any damage.

The staff recommends rejecting the low bid from Walsh Construction at $303K, because Walsh isn't willing to participate in the local employment program.

Lyons says the program requires that 15 percent of wages on a project be devoted to wages for the local resident.

Rainey cost difference can't be attributed to the local employment program. Recommended bid is not the low bid, not even close.

Braithwaite need to have vendors come prepared with a job description to see if somebody on local employment job list meets the qualifications. Difficult to understand what they can't find if we don't know what they're looking for.

Grover says earlier this year didn't approve an MWEBE contract when there was a $40K difference. (Here it's a $150K difference.)

Lyons says the new policy doesn't grant staff the ability to reject a bid that's the lowest compliant one. Compares it to requiring insurance from vendors.

Rainey says have a fiduciary responsibility to the city.

Grover says have policy that creates such a skewed result.

Grover says need policy that promotes local employment but also gets responsible and responsive bids (at a reasonable price).

Bobkiewicz says its an important project, shouldn't hold it for over a month — MWEBE Committee doesn't meet until September.

Committee votes to have staff bring the issue back to full City Council on Aug. 31 — presumably recommending contrat award to Walsh, the low bidder.

Lyons says staff is working on contract collaboration with Skokie for the other three refuse collection contracts. That's expected to come up at Sept. 14 City Council meeting.

Maiworm says city has been getting good results with this new approach, which involves grinding the road surface before putting down new asphalt.

Adds credit card in and out option at the ticket spitters.

A 7 – Other post employment beneftis report. Accepted and placed on file.

A 12 – Sale of city owned 1941 Jackson lot to Community Partners for Affordable Housing. (The ETHS geometry in construction house site.) Approved for introduction and action.

Plan to review the report with the boards at Rules Committee's October meeting.