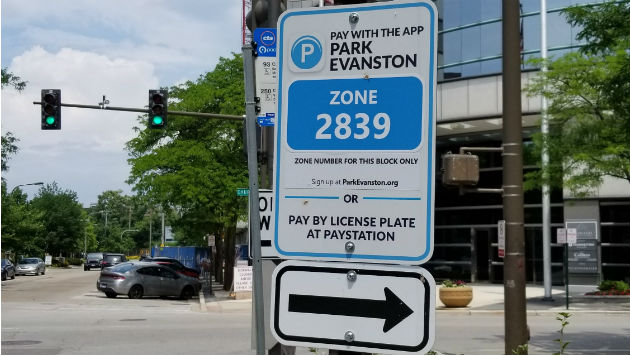 Here’s a recap of our live coverage of this evening’s Evanston City Council Administration and Public Works Committee meeting, at which aldermen are expected to get an update from staff on recent changes to the city’s parking programs.

Assistant City Manager Erica Storlie says have cut fee for paying fines online from $2.95 to $1.00 to now no charge. The vendor will get a fee of $0.22 regardless of the payment approach. She says the city could decide to absorb all of the fee, but that would probably cost about a quarter million dollars a year.

Fee for paying a parking fee with the app wallet is being cut to zero from $0.35. The fee for people paying without a wallet through the app will remain at $0.35.

Alderman Tom Suffredin, 6th Ward, asks whether there are other vendors.

Storlie says there are other possible vendors.

Storlie says will have promotion of the new rules once the Council approves.

One item would let people park in any of the three downtown garages for $175 a month — in an out all day for one vehicle.

Says will have zone sharing and time portability. Will be able to move anywhere within the city to a zone that has the same hourly rate.

Storlie says rates are the same citywide except at the commuter lots.

Plan to highlight that can park in the garages for five hours for $5 — versus the $7.50 it would cost on-street.

Consent agenda approved, with those exceptions

Fleming asks how actually looks at the report

Fleming asks whether can do a one-page summary to make it more readable for people?

Desai says could do a “popular annual financial report” maybe 6 or 8 page report.

Fleming says woud like to see that ahead of the budget season.

Vote is unanimously to accept the report and place it on file.

Braithwaite says he prefers to do business with local vendors.

Local supplier was not awarded the contract, owned by Kelly Gallagher.

Dave Stoneback, Public Works Agency director, says Union Metal went out of business, but has been reorganized and is back in business.

Says the old mold they have is a three piece mold and city now wants a one-piece one, to reduce the change of corrosion.

Says when there’s bidding, an Evanston firm gets a 5 percent price preference.

Says on RFP there’s a preference as well –for Evanston, minority and women-owned businesses — and both the staff-recommended and the locally-owned bidder got that preference.

Says staff is recommending the firm it believe has the best qualifications and the lowest price.

Stoneback says now won’t get sample pole until January next year and may not get regular supply until middle of next year, and have a short supply now.

Says if approve this will be approving a business that has asked for a waiver.

Says would like the staff to meet with the vendor.

City attorney Michelle Masoncup says the recommended proposal is direct from manufacturer, so doesn’t include a fee to a supplier.

Alderman Ann Rainey 8th Ward, says she doesn’t know why this issue is with the city — rather than the vendor.

City Engineer Lara Biggs says a major issue is to have a variety of pole materials. Want to have ductile iron and aluminum poles.

Says the city doesn’t get into arguments between contractors and subcontractors.

A9 – Motorola equipment for Fire Department

Storlie says while its a three year contract it has a 30 to 60 day out clause and allows the city to bring on additional vendors.

Says there’s now about a 12 inch drop at the entrance gate to the beach — has become hazardous.

In addition there are concerns about aggressive behavior of the animals.

Says city code has an ordinance that would regulate a dog beach, if we had one.

Lara Biggs, city engineer, says the same increase in water level that has closed the dog beach is also reducing the size of the people beaches in town.

Says city now has a dog park shared with the Village of Skokie in Southwest Evanston.

Says there are industry standards for locating dog parks … size…fencing…distance from residential homes.

Could look at other parks and city properties with vacant space.

Says will be challenging to find a really perfect location.

And may need to look at private property that’s now on the market.

Would need to get cost estimates and do a public input process.

Would probablly take until September of next year to reach a City Councl vote on a new park site.

Park might likely open about a year after that.

Approved to place report on file

Suffredin says it should have been sunsetted and wasn’t.

Says have an intern working on matching the signs to the code to a street map.

Says may take another six months to finish that.

Says expects to get a RFP for a city-wide parking study out within 30 days.

Fleming asks what happen with the 75 tickets issued in that area when the signs shouldn’t have been there.

About half of them have been paid.

Rainey says signage is inadequate in terms of size. But also have inadequate compliance. Have tried typing up a flier … on orange paper … and tying them to trees. Says that has led to total compliance. Doesn’t take much time.

Says work was all done by volunteers

Vote is to accept the report and put it on file.

A21 – MOU with NU re Lincoln Street Beach

Fleming says she’s concerned about the cost of the parking.

Suspend the rules to apporve those tonight

Suffredin asks who wants this.

Says its an undue burden on 6th Ward residents that live far from the train.

Concedes that have failed to meet the targets. Several unions don’t have workers residing in Evanston.

Says one union had five workers in Evanston — and all of them are working on the job.

Says maximum number of Evanston residents working on the site has been seven, right now have three or four.

Rue Simmons asks whether will get numbers up once go into finish work. Says should be able to get a guarantee that will get to the 15 percent minimum for local hiring. Says being in single digits is not OK.

Have spent $20 million so far.

Rue Simmons says contractor should have been aware of workforce when signed up for the deal.

Says she doesn’t want any more work done at Crown until get clear path to the target.

Braithwaite says there’s a lot of projects going on and a lot of people now are employed.

Lara Biggs says will have a more detailed discussion at the MWEBE Committee meeting later this month.

Assistant City Manager Erika Storlie says the work will continue until next July and there’ll be more opportunities in deconstruction of the existing building.

Says there’s nobody in this town with a union card who’s not either employed on this project or working somewhere else.

Rainey says to blame the contractor for not having the employees we want them to have is not the way to be going. Says maybe there aren’t the unemployed in this town now.

Says the city is in the beginning stages of developing people to be in the workforce — maybe they’re just not quite ready yet. Doesn’t mean that we aren’t working on it.

Planning and Development to start at 8:20 p.m.