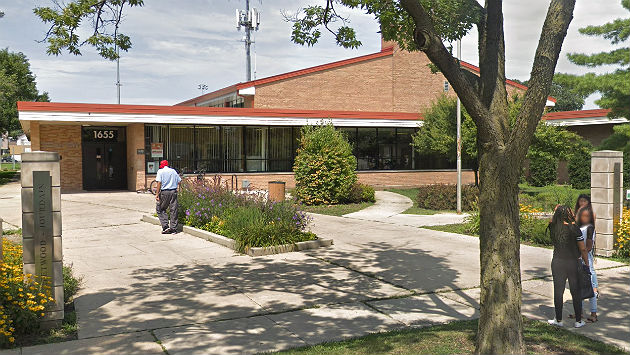 Here’s a recap of our live coverage of this evening’s Evanston City Council meeting — which will have an unusual format — with no committee meetings ahead of the full Council session.

The meeting is scheduled to get underway at 6 p.m.

Among the dozens of items under consideration is the re-awarding of a contract for nearly $600,000 in interior improvements at the Fleetwood-Jourdain Center, after the original contractor chosen failed to meet city requirements.

Mayor Steve Hagerty is on vacation. Alderman Peter Braithwaite, 2nd Ward, is filling in as chair.

Meeting starts with a presentation from Joey Rodger of Interfaith Action about a new research project on homelessness in the city.

A few of the comments …

Betty Bogg, executive director of Connections for the Homeless speaks in favor of two grant programs for housing that the organization runs for the city.

Meg Welch says should have had “conflict resolution” in dispute between clerk and mayor.

Albert Gibbs objects that people who don’t use the new Robert Crown Center will have to pay for it.

Minutes held at request of clerk.

Suspension of rules A20 and 21 for introduction and action approved.

Bobkiewicz says need to make the purchase to have operating sirens at all.

A14 – Authorizing city manager to pay payroll and bills

Rainey asks how much city gets in easement payments?

Bobkiewicz says now gets payments up front for new easements

Stoneback says there’s one old easement with NU for about $2K a year, but the others are all now paid up front.

Says there are a couple others … one underground or the Mather ($125K annually to the affordable housing fund) … one aerial for an Evanston Hospital overpass.

A16 – Votes needed to pass an ordinance

Fleming says she’ll vote no, says in time of turmoil doesn’t want to do anything to get things passed faster.

Rainey says that council would consider passing an ordinance with less than half the council supporting it is beyond my imagination.

Says could lead to a 4-2 vote to approve liquor at Ryan Field. Says can’t imagine that legal department suggested this.

A18 – Allow parking on portions of Pitner Avenue.

Rules suspended, at request of Fleming, and ordinance adopted tonight.

Suffredin asks about cut in license fee for class V from $8K to $4K … asks whether licensees are current with payments.

City Attorney Michelle Masoncup says there are no current Class V liquor licenses. Says now Space, which would seek a class V music venue licenses, now is licensed in combination with Union Pizza. And they’re current on their license fees.

A28 – Review of  police complaints

Fleming asks if there’s a memorandum of understanding between the city and NU police and whether NU police have a citizen review process.

Asks to discuss those issues at the Human Services Committee meeting next month.

With that note, motion to accept and place on file is approved.

Motion to accept and place on file is approved.

Issue referred back to human services committee. And report accepted and placed on file.

City manager says will work to build these plans into 2020-2021 budget.

Moving some items around on agenda …

Suffredin says doesn’t think the Council has gotten enough notice of the proposal to act on it tonight.

Says wonders how many other businesses will ask for similar relief.

Says have 24 employees now, about half are Evanston residents.

Says preference is always to hire from Evanston. Skill set for bakers is challenging to find.

Says are taking a huge risk in expanding the business.

Fiske says she feels “really uncomfortable” about the proposal. Says it should have gone to the Economic Development Committee.

Says should have asked property seller to cover some of these costs.

Wilson says a lot of the timing issue is result of city’s calendar, not the owner. Says could delay closing by four months if postpone tonight. Says Hewn is a role model for small businessess… community engagement…local hiring … don’t want to lose them from Dempster Street — but even moreso not from Evanston.

Says the new business will help this stretch of Central Street and if the property sits vacant the city won’t get any increase in taxes.

Attorney for Hewn says owners are running up against a due-diligence deadline. If they close on the property, before getting the incentive approved, they won’t be able to get the tax incentive.

Braithwaite says there’s been a lot of effort on their part to stay in Evanston, looking at other sites over the past two years

Wynne says she remembers when Hewn opened, says its the type of business we’ve seen thrive — it’s the thing you can’t order on the internet.

Says if other businesses want to take advantage of the 6B tax exemption … Ward Manufacturing … Autobarn … the tax break has helped keep critical businesses in Evanston.

Says Hewn will take a section of Centrla Street that’s been underperforming and you’ll help make it thrive.

Says if other businesses fit into 6B and meet these requirements, I’ll support you.

Says city will still get about a half million in extra taxes if Hewn goes in, versus having the building remain vacant.

Rainey says there’s nothing more destructive to a neighborhood than a big vacant building. The county doesn’t help small businesses operating in storefronts — she says, the 6B tax abatement only works for vacant industrial spaces.

Notes Little Beans as another success. Says the new event space on Howard Street will also benefit from 6B, that’s taking over the vacant Sherwin Williams building.

Rue Simmons based on inclusion and hiring and with staff recommendation, she’s supportive of the proposal.

Community Development Director Johanna Leonard says the tax benefit doesn’t take away from the city. Says having vacant properties costs the city for graffitti removal and other property standards issues. Says vacant buildings knock down the value of other buildings in the neighborhood.

Fiske wants to know impact on other bakeries on Central Street.

Matthei says doesn’t want to put another woman-owned business, Beth’s Little Bake Shop, out of business. Says Hewn is very different from a lot of the other bakeries, because of its large wholesale component.

Fleming says we live in a capitalist society and shouldn’t be trying to regulate what new businesses are going in.

Wilson moves to table till later in the meeting. Unanimous.

A22 – Major adjustment to planned development at 1815 Oak Ave.

Michael McLean, developer, says finding union workers who live in Evanston was very difficult in his last project. Says for this project will be hiring apprentices through the unions to start new careers in the field.

Jane Grover, chair of the commission, says will have an exhibit on redlining at the Civic Center opening shortly.

Says had community meetings last month that hope to bring to City Council as a proposal next month. Commission meets to firm up the proposal next week.

Alderman Robin Rue Simmon, 5th Ward, thanks residents for participating in the process.

Says has a goal that will have a policy before council this year.

Grover says plan to undertake a “truth and reconciliation process.” Says that’s separate from what’s being proposed for this fall.

Vote is to accept and place on file. Unanimous.

Suffredin says Mayor Hagerty lied in state of city address when said money from the NU God Neighbor Fund would go this year to Lovelace Park.

Revenue is on track … property tax is at 53% of total at the half-year mark.

Concerned that sales of large buildings be coming in lower than expected this year because deals closed in late 2018, before the higher tax rate went into effect.

Ike Ogbo says there are about 200 unlicensed vacation rentals in Evanston, working with an outside vendor to enforcing the licensing fees. Hopes to generate $80K in fees.

Have billed $400K to various entitites for OT reimbursement

Looking at reducing the number of PST officers.

Says have two school recourse officers in D65 and two others in D202 — may need to consider redeploying them. Says total cost is about $400K in salary cost that the city doesn’t currently recover.

Fire Deputy Chief Paul Polep discusses OT issues in Fire Department. Says will get reimbursement for some of it.

Bobkiewicz says several other communities have already raised the tax another quarter percentage point. Would need to bring an ordinance next month to have it in effect by Jan. 1. Says wouldn’t be doing it if Chicago and Skokie weren’t already at the higher rate. Next option would be to have it go into effect at mid year, in which case would have to adopt it by April next year.

Looks like there’s no objection from aldermen to at least bringing it back.

Skokie raised $200k per intersection annually with red light cameras … but there’s no appetite among the aldermen to raise that.

Bobkiewicz says Pharmacan is interested in expanding at the Maple Avenue garage. Says city could impose a tax of up to 3 percent. Thinks should be lower than that, assuming Chicago goes to the 3 percent level. Says totally unclear how much money recreational cannabis tax would actually bring in.

Says city stands to make some money — but don’t know how much .. won’t balance the budget … won’t do any magical things.

Expects to have a discussion at a Council meeting Sept. 16.

Says civic center HVAC systems need at least $7M of work. Says electrical and other systems work and space redesign … could be another $5M to $10M … and should be done at the same time as the HVAC work.

Fleming says need to have detailed discussion about whether should stay in the Civic Center.

Suffredin asks if have an estimate of the building’s value. Bobkiewicz says don’t have a recent valuation.

Biggs says the problems have been known for 20 years, ability to patch things is likely coming to an end.

Fiske says need to put money aside to do the repairs as quickly as can.

Asks if have done an estimate of how much square footage the city needs.

Bobkiewicz says its been 10 years since question really was addressed.

Bobkiewicz says planning outreach on budget equity issues on the week of Sept. 16.

Bobkiewicz says the idea of a two-year budget is sweeping the state …. Skokie has done one .. Oak Park is considering it.

Report is accepted and placed on file.

A13 – Hewn property tax 6B designation

Taken off the table. Added language regarding local hiring..

Report accepted and placed on file.

A29 – Mental health board report

… both those items referred back to the Human Services Committee … given the late hour. It’s nos 10:55 pm.

Appointment of John Hewko to Plan Commission is approved.

Fiske … says grown ups are riding bikes on sidewalk and texting at the same time. Says it’s more serious problem than ever before.

Braithwaite … tomorrow is National Night Out.

Rainey … this week is the city manager’s 10th anniversary of being on the job in Evanston.