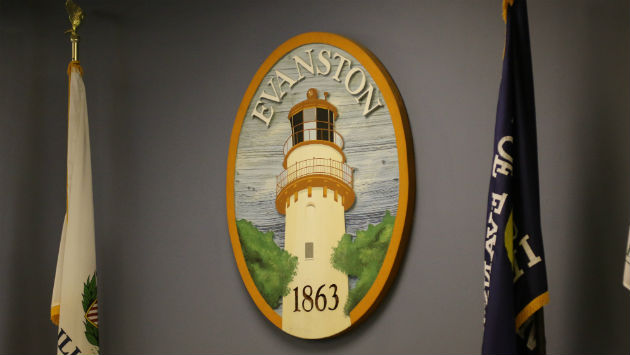 Here’s a recap of our live coverage of tonight’s Evanston City Council meeting at which aldermen are scheduled to select a search firm to find a new city manager, agree to purchase a new fire engine and handle a lengthy agenda of other items.

The meeting is expected to begin sometime between 7:30 and 8 p.m. A packet with information on tonight’s agenda items is available online.

Says tonight is the end of an era — of Wally Bobkiewicz serving as city manager for the past 10 years.

Alderman Judy Fiske, 1st Ward, says hiring Wally was one of the first decisions made by the Council after she was first elected.

Says has transformed an old fashioned city government into a lean effective community that gets a lot done in a short amount of time.

Praises his responsiveness and dedication. Says he’s been an extraordinary city manager.

Alderman Don Wilson, 4th Ward, says when he started as alderman couldn’t find information needed to do the job. Says Bobkiewicz has been really great about focusing on needs — human needs and infrastructure needs — says he’s shown an unprecedented level of commitment.

Says have amazing level of transparency. And city has been reinvigorated.

Alderman Robin Rue Simmons, 5th Ward, says made her feel heard, long before she came on the Council. Says Wally has always been sensitive to the needs of her ward.

Alderman Melissa Wynne, 3rd Ward, says has been an alderman through three city managers — says Wally has been the best the city has ever had, by a light year.

Says the relationship with Northwestern is so different — thanks to Mayor Tisdahl, PResident Schapiro and Bobkiewicz.

Says has improved relationship with the state and federal governments. (Notable succss the $18.1 million NSP2 grant — doing far more than any city our size.)

Says Bobkiewicz has brought together a staff that is second to none.

Alderman Peter Braithwaite, 2nd Ward, says when he started in 2011 the first big issue was the Dempster-Dodge TIF … and a shopping center that was damn near vacant now is full and a lot of the credit for that goes to the city manager.

Says went through a period of time when there was a lot of violence in town. Says thanks for his response in building youth services programs.

Alderman Eleanor Revelle, 7th Ward, says he’s been extraordinary. Helped get the Ryan Field parking lot alley paved. Praises staff team the city manager has put together — supportive and responsive. Has made Evanston a leader in so many areas — notably on sustainability that’s closest to her heart.

Says the 8th Ward has been the orphan ward over the years before Wally came. Says only her ward’s northern border adjoins another part of Evanston. Says the 8th Ward used to never get anything. Says now is accused of getting too much. And that’s all Wally’s fault.

Says he supported the city purchase of buildings on Howard Street that has sparked revitalization there.

Alderman Cicely Fleming, 9th Ward, says Wally listened to her even when she was an intern, years before she was elected to the Council.

Mayor Hagerty says Bobkiewicz has left the city with an incredible team.

Bobkiewicz says he’s so proud of the team he’s put together. Says Evanston is covered better than any other community its size.

Praises elected officials — past and present — who he’s served with.

Says the business of government at all levels is in crisis. Says its difficult to balance the demands and needs. Says remember the elected officials and staff are trying to deliver the needs of the community.

Says for democracy to work every voice must be heard.

SP 1 – Appeal of certificate of appropriateness denial for 2404 Ridge

Action is to hold the matter until the Oct. 14 meeting.

Alderman Fleming says she’s no happy with GovHR’s performance in recent searches. Plans to vote against it.

Alderman Rue Simmons says she’s opposed to hiring GovHR because it has no minorities on its staff.

Staff says GovHR has worked on three searches in Evanston recently — two of the people hired were black, one was LGBT.

Bobkiewicz says Evanston is a very progressive community and people who are progressive will want to work here — will be one of the great challenges in local government in America.

Alderman Wynne says the city used Slavin when it hired Julia Carroll, and it wasn’t a woman owned firm.

Says she’s pleases with the work GovHR has done — they’ve been very successful in understanding us, she says.

Fiske says she’d prefer to bring three firms in for interviews. Says wants to find someone who’s a match for our community. Says has nothing againt GovHR.

Bobkiewicz says Evanston is one of perhaps two dozen communities in America under 100,000 population that would do a national search.

Says could do interviews with three firms if aldermen want to.

Wilson says could do the interviews at the Rules Committee on Oct. 7.

Suffredin asks whether former Evanston employees would be doing the search. HR Director Lin says not likely, but will confirm who would be assigned to the search if GovHR were hired.

Suffredin asks whether can get Council approval before hire outside counsel.

Michelle Masoncup, city attorney, says sometimes have to get outside counsel on the case quickly. But can discuss with Suffredin about how to address the issue.

Held until next meeting.

A9 – Gift and use agreement with Chicago Young Americans Hockey Organization

Fleming says Northbrook charges about the same. Asks when would be public skating on Saturday and Sunday

Erica Storlie, assistant city manager, says staff has gone to great lengths to reach compromise that works for all users of Crown.

Says new faciity will have two large sheets of ice instead of one-and-a-half in current center.

Parks Director Lawrence Hemingway is still working out details of the schedule.

Wilson says need to make money to pay for the new center — that’s part of the business model.

Rainey asks, and is told that CYA has many Evanston residents.

A10 – Gift and use agreement with Evanston Youth Hockey Association

A14 -Residential exemption parking district B

Suffredin says it will give people a reason to spend their money elsewhere. Should be very reluctant to increase it.

Fleming suggests targeting the money for affordable housing or some other defined purpose, rather than the general fund.

Wilson says sales tax is regressive — but will never approve a property tax increase. With $300 million budget and 2 percent inflation, have to raise $6 million extra revenue each year just to maintain existing services.

Fiske says it just gives people another reason not to shop in Evanston. Says this is a really bad idea.

Wynne says it is a very regressive tax, but short of a property tax increase, what’s the alternative?

Except for Wilmette, almost all neighboring communities are at 10.25% already.

Says professional businesses should have to pay more. Some of them aren’t paying anything, she says.

City has to support new development to increase the tax base, she says.

Fiske says the city turned down the office building on the library parking lot — would have brought in 500 new workers — would have meant that wouldn’t have needed to raise the sales tax.

Says have turned down three different opportunities for new revenue in past year.

City manager says Council gets an up-or-down vote on the library levy. If Council rejects it then library has to come up with a levy proposal that the Council will accept, or it can’t levy anything.

Fleming says will vote against because doesn’t think should be using taxpayer dollars to encourage groups to hire diverse candidates.

Rainey — Bike the Ridge is Sunday.