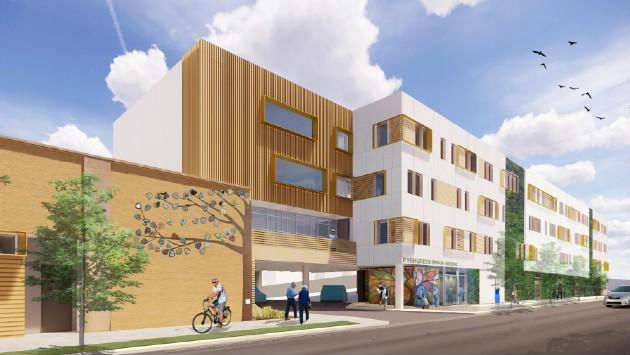 A rendering of the senior housing development.

Here’s a recap of our live coverage of tonight’s Evanston City Council meeting. The aldermen considered revisions to the reparations committee, introduced plans for a senior housing development on Howard Street and considered dozens of other items.

The meeting is scheduled to begin at 8:35 p.m. A packet with information on tonight’s agenda items is available online.

Mayor makes announcements and proclamations. … including one for National Day of Racial Healing on Jan 21. Related story.

Mayor says have a new “limit timer” for public comment on the podium.

29 people signed up for public comment … so 1:35 is the time limit for tonight.

Here’s the timer at the podium.

Several residents, including State Rep. Robyn Gabel, speak in favor of a “Back from the Brink” anti-nuclear weapons resolution.

Interim City Manager Erika Storlie mentions, in response to a citizen comment, that a new head of the Youth and Young Adult Program for the city will be announced later this week.

Mayor Steve Hagerty says its really complex and difficult to come up with solutions for reparations.

Says should be expanded and include somebody with a legal background, who have background in areas where may be looking to make investments with the program.

Alderman Robin Rue Simmons, 5th Ward, says she agrees — says legal staff should be involved. Says has had contact with others in advisory role.

Agrees will need experts from several different national organizations that work on diversity and inclusion and the racial wealth gap.

But wants a working group that can take the feedback from the community and have some action.

Says has recommended a couple of people for appointment.

Mayor asks do want to have only people in the community on the committee?

Alderman Peter Braithwaite, 2nd Ward, says this is all new to us. Says wants to get policy in place by September — when funds should be arriving from the cannabis tax.

Suggests somebody with mortgage background and somebody with fundraising experience — to gather more funds from banks and schools, etc.

Rue Simmons says have been doing outreach to find needed experts as they go. Suggests keep the committee itself small.

Alderman Melissa Wynne, 3rd Ward, suggests Tillery could be a great resource in finding other experts.

Says doesn’t know that city law department has time to work on the issue. Suggests maybe the ACLU could participate, or law schools with professors interested in the subject.

Mayor says sounds like the idea of three aldermen — Rue Simmons, Rainey and Braithwaite — seems like a good one. But says need to have a lawyer in the core.

Michelle Masoncup says the city law department doesn’t have the expertise or bandwidth to handl the project. Says would appreciate it a great deal if the ACLU could provide help.

Mayor says might later in the process seek outside counsel to represent the citiy.

Motion to add Braithwaite to the committee is approved.

Suspension of rules for immediate adoption for:

Rainey .. .sez city saved people from problems in the ’80s when city got involved in making condo laws.

Says people are terrified that will lose homes for less than what they’re worth. Have to have some protection for people who don’t want to sell their units.

Wilson says there are protections in place — requires a 75% vote. Says there are real concerns to take into account, but while working those out shouldn’t act in a way that will harm people that are in the midst of the process now.

Rainey says then maybe they shouldn’t be subject to the moratorium.

Wilson — but that’s not how it’s drafted — it makes it a bright line rule.

Fleming says she plans to abstain because she works in that building.

Revelle says she will abstain because she’s an EDC member

Wilson .. ice is open at Crown Center …very exciting to see how excited kids and families are to experience their new community center.

Council votes to go into executive session and public meeting ends at 10:24 p.m.