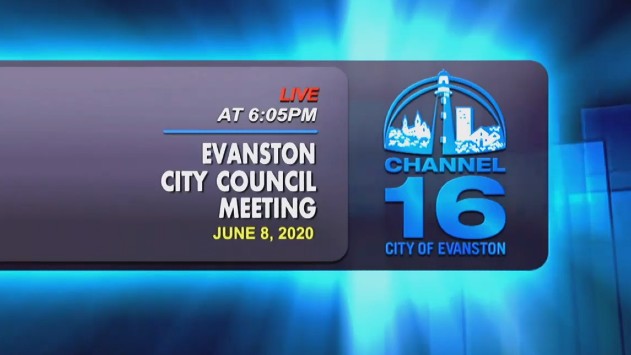 Here’s a recap of our live coverage of tonight’s Evanston City Council meeting at which aldermen were scheduled to discuss whether to offer the job of city manager to Interim City Manager Erika Storlie, but, at Storlie’s request, opted to proceed with the previously scheduled national search process for a new manager..

Mayor Steve Hagerty says coronavirus pandemic continues but has been overshadowed by the murder of George Floyd by police in Minneapolis.

Says citizens are rightfully fed up.

Says Evanston will continue to root out institutional and systematic racism.

Recaps his announcement of a 90-day review of police policies and procedures.

Mayor says will follow up with the speakers on how take the conversation forward.

Plans series of conversations on the different areas. Says Council reflects the diversity of the city.

On coronavirus mayor says the 7-day moving average used to be as high as 15 cases per day … now down to 2.5 cases. But don’t want to have people get complacent.

Interim City Manager Erika Storlie says some community centers will be opening this month and parking enforcement has resumed.

On city manager search process, says she values a public process, respects whatever the City Council’s direction is.

On Freedom of Information Act requests says now projecting about 1,200 requests this year down from 1,461 last year.

Alderman Don Wilson, 4th Ward, moves that in light of the interim city manager’s comment, removing the special order of business regarding appointment of the city manger.

Alderman Cicely Fleming, 9th Ward, suggests should have the consultants, GovHR at the Rules Committee meeting, which should be held very soon.

Mayor proposes having the Rules Committee meeting next Monday, June 15.

Approved unanimously on a voice vote.

CityManager search to be discussed at Rules Committee meeting next Monday.

Alderman Tom Suffredin, 6th Ward, says looks will walk out of this further in the hole than we were before.

Staffer says its difficult to predict what the cost tradeoff will be.

Rainey says alternative is to spend the money next year — doesn’t make sense to skip this year — and will lose more trees.

Fiske objects to the idea from staff of injecting trees in lower income neighborhoods on the city’s dime but making more well-to-do residents have to pay for tree injections themselves.

A4 at request of Suffredin

A14 at request of Wynne

P1 at request of Rainey

R1 at request of Fleming

(A7 failed in committee so it’s not on the agenda here.)

With those items excluded, consent agenda is approved.

Suffredin suggests postponing this expense for a year.

Storlie says would not have any savings for the general fund is this isn’t approved., it’s a capital fund project.

Wilson says this is a heaviliy trafficked area and there are a lot of kids .. says its a major safety issue. Says it’s important for getting kids in and out of school area safely.

A13-Four-way-stop at Hastings and Colfax

Wynne says wants to postpone discussion about music venues, until the next Council meeting. Has concern from a venue in her ward. Moves to amend the ordinance to remove that section.

Wilson says its important to exempt small venues from the tax.

Her amendment is approve 8-1 with Wilson voting no.

Fleming says she’s opposed to the streaming tax — especially when people now can’t even go to the movies.

Tabled in committee until Nov. 9.

Fiske …motion is to accept and place on file. Staff to work on possible revisions.

For introduction. Goal is to make city code match the city council rules

City attorney says state municipal code is silent on removal of city manager. As home rule municipality Evanston can set its own rules.

Fleming says simple majority is fine, rather than the seven votes required under the Rules

Rainey wants to have the same number to hire and fire (hiring now requires seven.).

Braithwaite .. 6 p.m. Thursday ward meeting … what residents wnat in a city mgr. And makes referral to develop policy for police regarding how far away person taping a police encounter should stand.