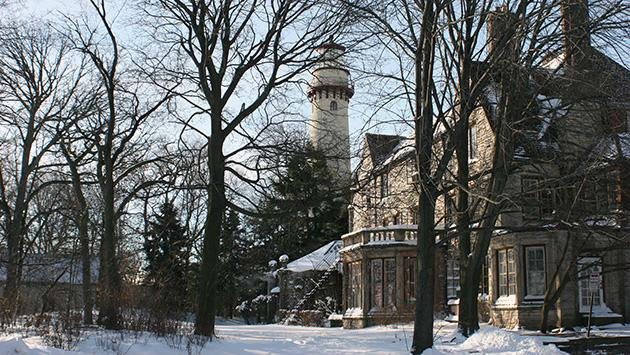 Here's a recap of our live coverage of tonight's Evanston CIty Council meeting.

The meeting is scheduled to start at 7 p.m.

What to do with the city-owned Harley Clarke mansion is expected to be the hot issue on the council agenda tonight. On a less-controversial note, the aldermen will rename the council chamber for former mayor Jay Lytle. 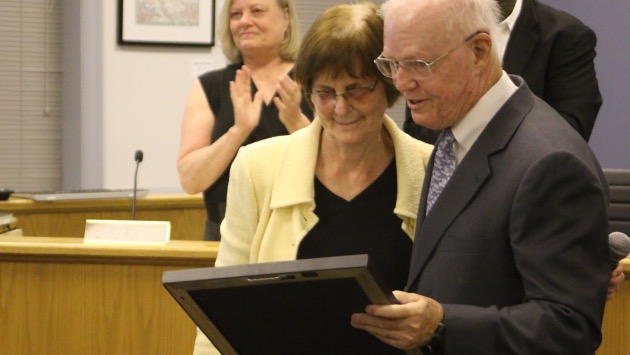 Tisdahl and Lytle, looking at the proclamation.

Lytle says it's a really joyous occasion. Says he's completely forgotten the bad days — and has only fond memories of his time in city government.

(Council takes a break for some celebratory cake and cookies and a ribbon cutting. 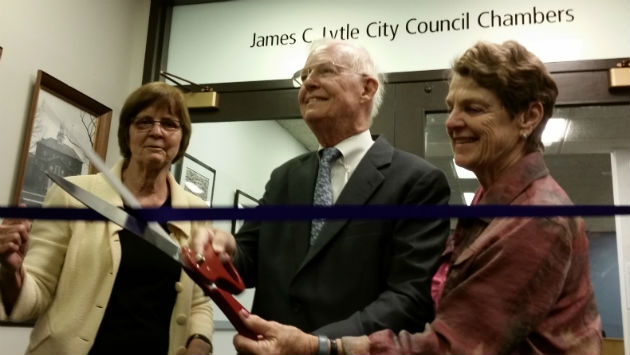 Meeting resumes at 7:33 p.m. with awards to participants in the mayor's summer youth jobs program. 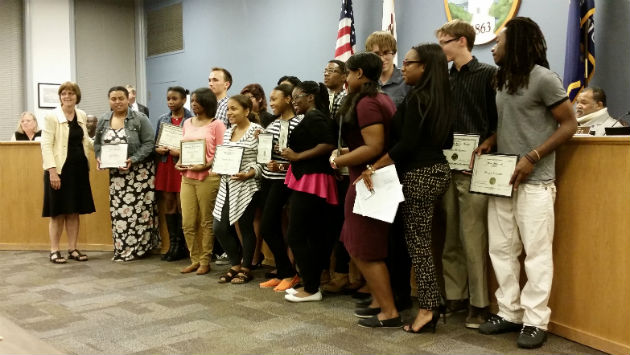 Award winners from the more than 500 young people participating in the summer youth employment program.

Bike the Ridge is next Sunday, Sept. 27.

Luke Stowe, who's led the city's digital services program, is congratulated on his service. He's leaving for a private-sector job helping develop similar programs for other communities.

(Lot of speakers tonight … each gets just 90 seconds.)

Carolyn Murray, mother of murder victim, complains that not enough being done regarding gun buybacks and other anti-crime efforts. Sharply critical of the mayor. Urges reinstatement of the gun buyback program.

John Walsh, board member of the Lakehouse and Gardens group. Says they have a viable, workable proposal or the Harley Clarke property. Says now have $17K in pledges.

Mike Vasilko says he favors a for-profit entity to lease the Harley Clarke mansion, says it would be the financially responsible path — that would generate tax revenue for the city. Says "choose logic versus emotion and the angry voices you may be confronted with."

Various other speakers  address the council, most opposing a sale of the Harley Clarke mansion.

Items taken off the consent agenda:

Alderman Ann Rainey, 8th Ward, says a theater was part of the original vision for reviving Howard Street. Says new version has benefited from advisory group composed of experts from the theater industry.

Approved 7-2. Miller and Wilson vote no.

Alderman Fiske says it's actually for an alley near Colfax Street … not Emerson … typo in the meeting agenda.

This was held in committee

Miller says it will substially improve the plant by fully enclosing the production facility.

Presentation on the mansion from staff

Alderman Grover says she likes Rainey's proposals. Wants it to be accessible and open to the public. Says didn't hear any objection to going through another RFP process at this point.

Says need to think creatively. Need to start with making the use something that serves the public. Then can work out some of the other issues about what form it wold take.

Says this started out as  mess when started talking about it four or five years ago. Doesn't often make sense to give away an asset like this and hope that a non-profit will operate it. Suggests the Lakehouse group might consider partnering with another group to produce a viable, long-term sustainable option.

Thinks building is worth keeping –but question is who pays for it. Thinks city probably doesn't have the appetite to undertake the work.

Alderman Tendam. When Tawani proposal…that was up and down vote on that proposal … says there was no presentation or hearing. Says he prefers  lease over a sale and a private investment versus public one. Thinks private investment is more sustainable. New operators need to be able to fund it — not have to come back to council to bail it out. Lease term could be between 25 and 99 years.

Concerned that Robert Crown center is much more urgent need — doesn't want another not for profit to compete wit hti. Says there's a lot already at lighthouse beach for people to enjoy. Says have more important things to find funding or.

Alderman Rainey .. .says lot of confusion about private/public … says doesn't want to limit the potential use — as long as it's for public use.

Says Lakehouse people likely won't be able to ocmpete with some for profit organization . Says cost for each should be the same. Non profit doesn't get a special deal.

Alderman Wynne says "for public use" is a very broad term. Agrees should not sell the land. Questions whether should sell the house. Understands cities don't like to lease beyond 50 years. Says she's not in favor of any for-profit use. Not in favor of any commercil use on the lakefront. Says that's one of the great beauties on the lakefront. Says she wants to be careful for even a not-for-profit use becoming too commercial. Says clearly that's not an option the public wants either.

But says she likes Rainey's suggestion that there should be a monetary commitment. Says the IDNR idea — was too much like having a fairy godmother step in — too good to be true.

Alderman Fiske says there isn't a consensus for an RFP — says she won't support going out for one. Says have a citizens group that has been working hard and long and has been moving toward raising money. Should give them a little more time. They have their finger on the pulse of the community. Says they've gotten wide support and we need to respect that. But she says she's concerned about the house being the tail that wags the dog. Says whether the house falls down… the lakefront is still going to be there. Says can't support selling the house to a private party. Says can support leasing it to a non-profit. Says city is just letting the property deteriorate and that's just shameful. Suggests giving the not-for-profit group six months to a year to come up with a proposal that would keep the property in public hands forever.

Alderman Wilson says this demonstrates the choices. Says a report in 1977 about the property — probably wouldn't know the difference if read it today. Public access to me isn't a place where can get at $12 cocktail or get a bed for a night for $250. Says he goes to the beach and sees how people use it. Says it's teeming with families. Says it's about as heavily used as Clark Street beach, the most-used beach in the city.

Says city makes decisions that have huge price tags. Says chose over long period of time to not maintain the Robert Crown Center. Says the condition of the Civic Center was embarassing. Says city needs to maintain what it's got and that should be the starting point.

Alderman Miller says doesn't think should sell any portion of the land or property. Says not use best use of property. Says could do a partnership with the community … rather than an RFP. But says he does like the idea of an RFP — had competitive proposals for the animal shelter, for example. Says could have a foundation in town to improve the structure. Says doesn't think there is the will on the council to fully fund the repair of the faciity with taxpayer dollars. If there isn't the community interest in funding the work privately — then would prefer to see it just be a park.

Grover asks Fiske and Wynne whether a cafe in the coach house — would be unacceptable commercil activity to them. And what about having an "event space" … as the Lakehouse group proposes.

Wynne says part of the difficulty she has with the lakehouse proposal is that — having and event every Saturday — that could be a problem as well. Says go around the back of any restaurant — garbage, etc.

Grover says if don't it ties the hands of the non-profit to generate funds.

City Manager Wally Bobkiewicz offers alternate proposal … .suggests request for qualifictions rather than an RFP … give a period of time for groups to identify themseles … says not forcing any one group to come up with a specific plan.

Grover says would be happy to not talk about it for a few months — but wants to keep it on the radar screen.

Rainey says it sounds like getting to the point where demolition may be a good idea. Says concerned about securing the property — heating… all the things that happen in the winter to an empty property. If we're not going to take care of it, let's tear it down.

Rainey asks can we pick just one entity and turn it over?

Bobkiewicz says can't just turn it over to one party.

Bobkiewicz says at least need to clean up the coach house. Haven't looked at heating system or window seals there.

Holmes says "here we go kicking the can down the road again." Says have been discussing for the last five years. Says have to as a council decide where we are and vote it up or down.

Tendam says need to go out for RFP. Says shouldn't just do a nod to a single group tonight. Wouldn't be worth it for any other group getting involved.

Miller says city code appears to allow a lease without having an RFP process. Says agrees with Fiske that shouldn't rush it. Thinks could work out an agreement in time for the next meeting.

Fiske seconds the motion to hold … will be held to meeting of Oct. 12.

Sat Nagar, city engineer, says will have to relocate street lights in the area because of street project that will widen sidewalks. Have opportunity to add pedestrian lights to make the area more pedestrian and bike friendly.

Could either reuse existing poles or replace with different style of fixtures. (Illustrations of two other options in the presentation.)

Assistant City Manager Marty Lyons says have time pressure to get the project to the Illinois Department of Transportation which is funding the project.

Lyons says this is a good pilot project because will need to do other light replacements in the future.

No vote taken. But appears to be going with the last version in the the packet.

Miller says thought tonight's discussion was great. Heard where aldermen stand on the issue. Says can publicly decide what should be doing with the mansion in three weeks.

Holmes says city is doing good work on violence issues … not going to resolve it overnight, though. Need help with whole issue of guns in the community. We would vote right now to take all the guns out of Evanston if we could, but we can't. Says gun buyback is ongoing all the time.

Tendam says tonight was a big disappointment on an issue that has taken far more energy and attention than should on an issue that doesn't really affect that many folks. Would like to see passion like that for affordable housing, for stopping violence, or all sorts of things that are so much more important. Harley Clarke isn't up there with the real issues in the community.