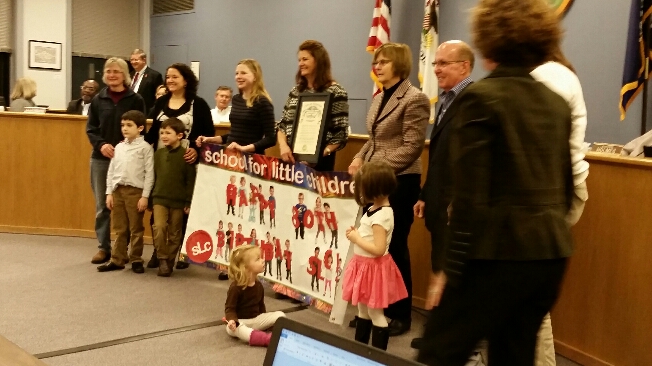 Here's a recap of our live coverage of this evening's Evanston City Council meeting. The big action — approval of the 1571 Maple planned development was postponed until next month to work out a bigger contribution for affordable housing.

Mayor reads proclamation marking the 80th anniversary of the School for Little Children. 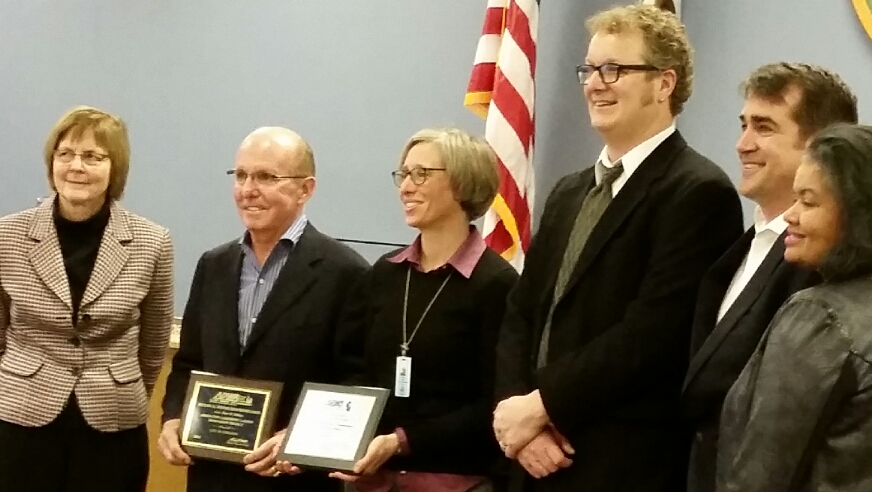 Award presented for development of the Arrington Lagoon on the lakefront.

Evanston lobbying day in Springfield coming up on April 14. City manager says there's still room on the bus if more people would like to make the trip.

Denise Stoneback, praises planned increase in distance separation from homes and schools for gun ranges from 250 to 350 feet. Wants other restrictions.

Other speakers also ask for stricter restrictions on guns.

Sharon Fagan of Citizens Greener Evanston favors the 1571 Maple planned development — says it's a good way to get more utilization out of the Maple Avenue Garage. Also likes the car sharing and bike storage aspects of the development. But suggests the affordable housing contribution from the developer should be more like $1 million rather than the $120,000 proposed.

Doug Fuson, resident of 1570 Elmwood, objects to planned 1571 Maple planned development. Repeats claims that city staff told prospective buyers in his building that nothing over 42 feet tall could be built there.

Howard Ellman, president of condo association at 1570 Elmwood, says the 1571 Maple project is too big for the land and will have a detrimental effect on the neighborhood. Suggests reducing the number of units included.

Steve Lewis, who lives a few blocks south of 1571 Maple, says he's concerned about parking for the new development. Doesn't buy the "transit-oriented development" argument. Says it isn't about building more units with no parking.

Assistant City Manager Marty Lyons does a presentation. Says revenue was health, growing slightly. Expenses exceeded budget by just 1/10th of a percent … first time its been over budget in five years.

Bobkiewicz says next month, on April 27, will make recommendations for potential adjustments to the budget in response to the problems in Springfield.

Here's what's been taken off the consent agenda:

Alderman Don Wilson, 4th Ward, says important for community members to be carefully heard. Says number of people have felt they couldn't comfortably express their opinions, that's disappointing. Regardless of opinions, shouldn't be mocked or be bullied, he says.

Says it's a very difficult property, strangely shaped, sandwiched between two completely different types of properties. Says has heard from people to north who are happy with it, while people to south are very unhappy.

Says was clear for years there would be development of this vacant property. Says the result is far from perfect. Says he started with very grave reservations about the parking solution. Not going to say he embraces the idea, but believes there are people who want an apartment and don't have cars — don't want to pay extra for parking as an amenity.

Says if you put a parking deck on the lot and a tower on top of that it would increase the scale of the project.

Alderman Delores Holmes, 5th Ward, says got lots of emails. Says was asked about handicapped spaces. Staff told her that required spaces are determined by the amount of on site parking — and only one is required, and two are being provided.

Says appreciates the $120K contribution  to affordable housing — but would like to see two affordable units on site.

What is new is whether we should allow buildings that don't have convenient parking. Says that's the problem she's having — are asking to allow most of the parking a half mile away (actual distance is a quarter mile).

Says doesn't believe a lot of tenants won't have cars. Even people who commute by rail during the week want to use their cars on the weekend.

Says will be spillover effect into the residential neighborhood. And believes there will be a negative impact on the views from the building next door.

Alderman Melissa Wynne, 3rd Ward, says initially she was very concerned about the distance to walk to the garage, but recognizes that have buildings that have rive-through for banks that will become obsolete — given what we're doing with (online) banking these days.

At Main and Chicago have development that will start in April where are only requiring 72 percent of the required parking.

Don't want to have developers build things that won't be used.

Says the developer only needs to find 101 people who want to live in a building that doesn't have on-site parking. Says a lot of people living in vintage building in her ward manage to find spaces.

Says parking garages cost $30K to $35K per space — so understands the request from a speaker tonight that should pay $1M rather than $120K for affordable housing.

Says city hasn't ever gone out this far on a limb for a development before. Says are saving the developer an enormous amount of money … would like to hear more about what they could do.

Alderman Mark Tendam, 6th Ward, says he hasn't warmed up to the concept of parking that far away from home. Says people, especially on the weekend will be crawling the neighborhood for parking. Says should look for parking solution closer.

Alderman Ann Rainey, 8th Ward, says city has a huge parking garage — perfect for this location. People who have a bunch of cars aren't going to rent here.

Says should take the $120K contribution for affordable housing off, and require 5 units to be set aside for people at 30 percent of median income. But only require affordability for seven to 10 years — not in perpetuity.

Makes that as a motion

Alderman Peter Braithwaite, 2nd Ward, these are the same developers who will be coming to the 2nd Ward (he's referring to the 1815 Ridge site). Says thinks should have 10 percent affordable housing units.

Developer John McLinden says would have appreciated having the economic issues on the table sooner, rather than at the 11th hour.

Says deal has to work for all parties involved.

Says in typical parking space probably cost $30K on a normal site. This site can't really handle that — because its "L" shaped …with the aisles and elevator core …doesn't work.

Implicaton that saving — but also not achieving the income. Say charged $150 a space could charge. Says if oculd build on site would pay for self. If could build them on site would do so.

Having down the street is great for city because has the space.

Says if was heavy user of a car wouldn't live in this developer. The risk of parking not being successful is his risk — not the neighborhoods.

On affordable housing …. says has been doing affordable housing in a number of communities, including Chicago … is a cost problem.  At 60 percent of median income are leasing at $1 a square foot … which is about the operating expenses and taxes.  At 30 percent wouldn't cover it

It's the differene between being able to do the deal and not do it.

In Chicago, when do affordable housing, at least until recent change, everybody plays by the same rules. Everybody's ost structure the same.

Here in Evanston several new buildings he'll be competing with aren't faced with those costs.

Don't force something on me that my competitors don't have to do and ore me to lease against them.

Wynne asks what projects the rents to be.

Developer…will range from $1,400 on low end to maybe $3,500 on high end … based on prime competition being projects with similar amenities — like the Fifield buildings on Emerson and the 1717 Ridge building. Says average one bedroom probably be $1,900. Two bedroom $2,600.

Fiske says she wants to see affordable units in the development. Wants figures on how many parking spaces are occupied in other new developments. Suggests perhaps there's a need for a parking deck on the block.

Grover says the parking issue at Central Station is failure of management to advise tenants that they wouldn't qualify for residential parking permits on street.

Rainey says agrees that units are important but doesn't want to lose the project. Says how about $100K a year for 10 years to subsidize units in areas that are prettey homogeneous. Need to apply those dollars to actual housing.

If had housing fund could assist families to go into the buildig.

Michael McLean, partner with the developer andd resident of Evanston, says didn't ignore the issue of affordable housing when started planning. Tried to come up with multiple levels of susstainability, … leed, bicyles, small units, downtown living, shopping local. Felt with small units could house people with median income level of roughly $50K in Evanston and eliminate their need for a car — saving the $10K a year.

In other projects we've looked at, he says have looked very differently.

Other developer, McLinden, says….would provide $100K a year over 10 years … ?? It's not easy to negotiate in public. We could do $500K however you wanted. Can't do $1M. Doing it over time is beneficial.

McLean says were aware that E2 made $250K  contribution but have 350 units there … versus 101 on this project.

Mayor says doesn't think that this project provided a significant public benefit — that the affordable housing contribution would be good as a public benefit. But she's still concerned about the neighbors and their views.

Grover want to know more about how city would administer a housing subsidy program.

Rainey says not comfortable with sending developer to staff. Says wants to get as much money in cash as can. Says you know where the affordable units end up — 8th Ward, 9th Ward, 2nd Ward and 5th Ward.

Says can't get on a train from Dodge and Mulford because the train doesn't stop.

Says need program to provide subsidies from the city's affordable housing fund. Have the developer approve the tenant, and then have the city approve them for the subsidy.

City manager asks whether there are any other outstanding issues?

Braithwaite moves and Rainey seconds to hold the project to the April 13 council meeting.

Tendam … says working to help residents of two houses on Harrison Street whose homes were destroyed by fire this year. Anyone who is interested in helping can contact him.

Rainey … says Peckish Pig has made its last payment on the patio …over $18K to the city.

Burrus says her last day as alderman will be Friday, April 24. Says it's been an honor to serve the ward.