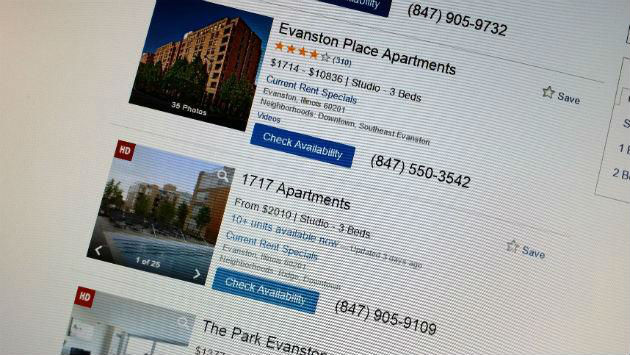 Here's a recap of our live coverage of tonight's Evanston City Council meeting. Rental licensing and the 831 Emerson planned development are among the items on tonight's agenda.

The meeting is scheduled to begin at 9:15 p.m. A packet with information on tonight's agenda items is available online.

Thirty people have signed up … so mayor says they get just over a minute each. Some of the comments …

Daniel Garrison, 1228 Simpson, says he's been a landlord since 1972, says the schedule of penalties and remedies should be scaled to the amount of properties owned.

Priscilla Giles says she opposes the "neighborhood integrity" ordinance — says it will result in a witch hunt. Should punish the person rather than the owner of the address.

Carliss Sutton, opposes rental licensing ordinance — says it will be unenforceable and was rejected twice in the past.

Renee Paden says the rental licensing ordiJnance will promote gentrification and will be unfairly applied to different parts of the community. Says should be working with landlords rather than punishing them for the behavior of tenants.

Jerri Garl from Environment Board says the transfer station agreement should go much farther in imposing restrictions on the operation.

Wilson says he thinks it's too expensive. Miller says he agrees.

Rainey asks what happens to the $300K+ grant if it is rejected. City Manager says the money would stay with Chicago, rather than be available to Evanston.

Fiske says she's been critical all along about the cost of the Divvy program to consumers. Asks why can't just get bikes, paint them and put them around town.

Says not getting very much money from advertising on it. Asks where else could put the money that would be more productive.

Rainey asks what the likelihood.

Staffer says about $280K in advertising appears to be lined up.

Bobkiewicz says have largely covered the cost of starting the program. Says haven't figured how much rental fees will be getting from riders.

Says Chicago has met them through user fees and sponsorships. Thinks will be able to largely cover the operating costs going forward. If can't do that will have the assets of the bikes and stations that could be liquidated to recover costs.

Miller says Chicago is still losing money on Divvy — doesn't think Evanston will get as many riders.

Revelle says there's great enthusiasm in the community for the bike sharing program. Says have funding in place to get it going. It's part of the big sustainability push to get people out of their cars. Urges colleagues to support it.

Wilson says city is defendant in lawsuit. Have to look toward settlement. Says the impact fees should go to the affected area, not to the general fund of the city.

Says trying to get the best deal we can get.

Braithwaite says wants to increase the fee rate if the volume of waste disposed of at the station increases over current level.

Revelle says wants to have Advanced report what types of waste are going into the facility, Braithwaite says that's listed on the entrance to the facility.

A 8 – Host agreement with Advanced Disposal

Farrar says will go back to Advanced to discuss the escalator clause and the fee boost for higher tonnage. Noting those requested changes … the vote is

A 9 – Repeal of prior waste transfer station fee ordinance

Wilson says by time have final vote on this issue will have answer on open questions regarding A 8  terms.

Vote tonight to introduce the repeal is 9-0.

Wilson says some of the problems haven't been resolved.

Says deal killers — resources needed to inspect all the units in the city. And what happens "if" — loses license.

Would like to take the "repercussions" from the licensing proposal (p. 234) … supplement stuff with mentoriing …maybe don't have to hit with big fine.

Says then should drop the rest of the licensing ordinance.

Rainey says ordinance is very controversial… when have an ordinance that creates this much dissention, need to fix it.

Says doesn't believe landlord training is the answer to anything. The problem landlords won't go.

Holmes says have been on this road in 2008 and 2012 — still can't get something that everybody will agree on.

Says have a lot of properties that aren't registered.

Says licensing ordinance does two really bad things — requires 19,000 apartment inspections..will have to spend years of man hours looking at good apartments — will be wasting resources on that.

Under the licensing scheme would be requiring landlords who didn't get a license to evict their tenants — which probably violates state law.

Miller says concerned that should have due process involved in whatever comes out of the process. Would like an impartial hearing officer.

Rainey asks how are going to keep a count of the incidents at each building … and where are they going to send that …to the law department…or the health department?

Farrar says it is possible to keep those records. Says that was an underpinning of the crackdown on problem properties last fall.

Rainey … says it's going to take hiring a lot of people to do that work.

Rainey moves to table the ordinance. Doesn't get a second.

Fiske says there's substantial opposition to the development. Says it's not in the best interest of the city to approve it.

Miller says there's a need for a plan for that area. Says Emerson has been the border of downtown. Says times are changing. The zoning hasn't really determined yet what need to do. This is the next big area need to decide what to do with the area.

Bobkiewicz suggests referring it to Planning and Development or Economic Development.

Motion fails 7-2. Rainey and Tendam cast only votes in favor.