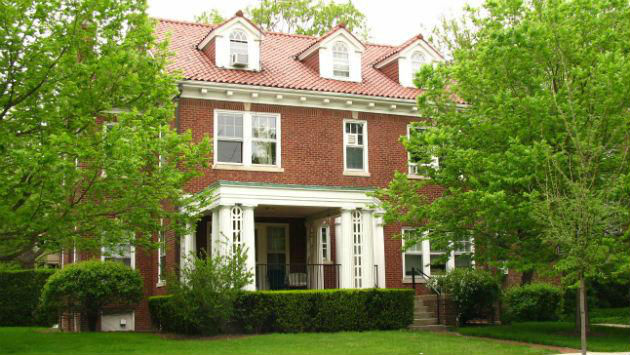 The aldermen are scheduled to get a budget update, a report on fundraising for the Robert Crown Center and decide whether to landmark a property at 1726 Hinman Ave, over the objection of the property owner.

The meeting is likely to start about 7:45 p.m. A packet with information on tonight’s agenda items is available online.

Mayor Steve Hagerty says he sent letter to mayor of Charlottesville, Virginia, to share concern about events there on Saturday.

Ray Freedman, 2300 block of Greenwood, says he and neighbors are opposed to the proposed HOW affordable housing project at Dempster and Pitner.

Eric Passet, favors proposal A14 for resident parking stickers for 2542-2566 Prairie, a building his company manages

Steve Lamson, favors widening of Callan Avenue, where he lives.

Another speaker favors the Callan project.

Matt Rodgers favors widening of Callan. Says there are 300 units in that corner of Evanston and only 100 parking spaces.

Sister of 12 year old arrested for riding on the back pegs of a bike objects to his arrest. Says he now distrusts the police.

Other residents of Hinman Avenue speak in favor of landmarking 1726 Hinman.

Jim Kollross says Sigma Chi contributed to the decay of the 1726 Hinman building. Dismisses rights of owner to control the property

Says recognizes that need police, but says all the kids need to have the same set of rules.

Says its a hazard to be a black male.

Number of local Boy Scouts speak about the benefits of the scout program.

Manuel Flores, attorney for Sigma Chi, says it’s a charitable organization and has been a long-time member of the community. Says had already petitioned city for demolition of the property. Denies that it intentionally tried to harm the property or tried to violate the city’s demolition policy.

Alderman Peter Braithwaite, 2nd Ward, says wants to apologize regarding the Bady child’s arrests — says it’s his worst nightmare. Says the child was incredibly poised. Says under no situation does it live up to Evanston’s standards as a communty.

Eliminating 1st hour free would be about $277K.

Sunday fees at meters would be about $400K

Says furlough day would a last resort. Suggests not having the lost pay day so close to Christmas. Suggests making it earlier in November.

Alderman Don Wilson, 4th Ward, says he doesn’t support charging at the meters for Sunday. Says wants to look at equalizing the parking meter fee at $1 an hour city-wide. Also suggests possibly raising the meter violation rate — an idea that was rejected by the Administration and Pubic Works Committee at an earlier meeting.

Alderman Ann Rainey, 8th Ward, says she won’t support increasing parking meter rates but would support reducing the number of tickets to trigger booting– but only because the city’s about to start an amnesty program.

Braithwaite says he’s opposed to a furlough day, except as a last resort. Favors the parking ticket amnesty program. Suggests looking at fines in administrative adjudication.

Braithwaite says multiple vehicles registered to the same person have those both count toward booting — thinks three tickets and booting is a little aggressive.

Says would like to be be more aggressive for people who are out of state. (Says he got one ticket in Michigan and ended up with his license suspended.)

Lyons says with a lot of additional social media outreach options he expects to have more success with the amnesty program than when it was done before, six years ago.

Velan says with 10 parking tickets can submit info to the state and end up having drivers license suspended.

Velan says are investigating that, but checking on credit reporting law issues.

Wynne asks about trying to get better payment level from NU students. Says is confident that students can’t graduate if they have unpaid NU parking fines.

Hagerty says should get comment from business owners — if their out-of-town employees will have to pay more.

Report accepted and placed on file.

Lyons says will have more info on an upper expectation for fundraising by September.

Have 275 donors to the project so far.

Mayor thanks all the volunteers involved in the fundraising effort.

A 14 – Resident Parking on Prairie Avenue

Consent agenda, minus those item, is approved.

Rainey pushes for doing it this year.

Sufferdin says it was scheduled for next year and should be done then.

Rue Simmons supports the proposal. Says she understands what it’s like not to have a parking spot. Will give some relief for the families in this area

Braithwaite says he used to live there — says the added parking is needed.

Fleming says she used to live on Callan too, but says need more transparency in decision-making. Says should stick to the plans.

Fiske says there needs to be more communication with aldermen in every ward about needed projects.

Wilson says it want to not do loans, could change the policy. But city has had process and procedure that the applicant’s gone through.

Says have agreement to pay back, accept a personal guarantee.

Suffredin says he doesn’t think the City of Evanston should be in the business of making loans. Says it’s great for the neighborhood but terrible for my constituents.

Fiske says should look at the process in the Economic Development Committee, but will support this loan, says the terms are better than what the city has done before, and hopes the business will be successful.

Rue Simmons says owner has a great business downtown, not the time no to change the process.

Rainey says the city has a process and has followed it.

Says people have said it can’t possibily work, but city has shown that it does.

Fleming says may need to scale back economic development programs because of tight budget issues, but will vote for this project.

A 14 – Resident Parking on Prairie Avenue

Wants to include 1726 Hinman in the Lakeshore Historic District.

Braithwaite … asks for budget memo on cost effectiveness of bidding out the phase one and phase two Main Street project all at once.

Wilson … wants ordinance drafted to provide for automatic expungement of juvenile arrest records where the juvenile wasn’t charged with any crime.

Mayor Hagerty says had 26 applcatons for the police complaint review committee. Will recommend 9 members for appointment at the Sept. 11 meeting. Says wants to re-open the application process to try to get some younger applicants to apply. Will have until Friday, Aug. 25 to apply.