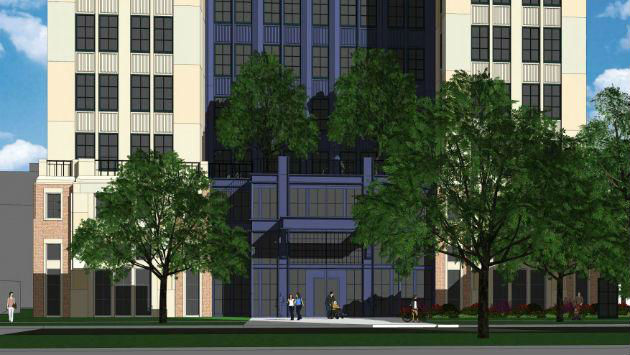 A packet with information on tonight’s agenda items is available online. The aldermen are scheduled to vote — amont other things — on approving a contract to sell a city parking lot downtown for development as an office building, to buy body-worn cameras for the police department and to consider funding for a 16-unit affordable housing project at Dempster Street and Pitner Avenue.

Alderman Suffredin is absent this evening.

Paul Mark Davis says HOW project is “a monstrosity.”

Most speakers are repeating comments they made earlier at committee meetings or previous council meetings.

Don Wilson reads letter from a 10-year-old resident who wants a stake board park at Robert Crown Center.

Says city clerk’s office has declined to redact the information.

Says doesn’t think residents are aware that their requests are going to be made public. Says they show up in Google searches

Says it’s horrifying  and the clerk’s office has declined to address it.

Says he thinks there’s a way to continue using it — but needs to be redacted.

Says FOIAs should continue to be responded to. But responses should go to the person making the request — not to everybody in the world.

Says Next Request has an “embargoed request” feature so that won’t be visible until an hour after its closure.

Says looking ahead need to address other issues with FOIA, including the formatting of records. Suggests more use of xls or csv format, rather than pdf format.

Alderman Wynne says she doesn’t think people should have to make a phone call to not have their identity made public. Shouldn’t have to call to make it public.

Says having the website isn’t required by the FOIA law.

Alderman Cicely Fleming, 9th Ward, says would like to see the law department review the issue. Says are in age of transparency and generally people should be able to access the information.

Mayor Steve Hagerty says the change is that FOIA requests, which formerly were only released to the requester are now being released to everybody.

Reid says changes have been made to address the concerns. Says works with police department on redactions Says FOIA officer should be an independently elected official (like himself).

Wilson moves that Next Request system be taken down until it can be reviewed by the Law Department. And that set a policy that police reports also go only to the requesting party. And schedule discussion at next Rules Committee meeting for policies of using the system. And that Rules Committee designate a FOIA officer

Reid says Next Request was implemented to make it possible to handle the large number of FOIA requests.

Vote on motion is 6-2 with Rue Simmons and Fleming voting no.

Held for next City Council meeting

New goal set of $15 million in fundraising from public. (Has been $10 million.)

Assistant City Manager Marty Lyons says some pledges will not be completely filled for five years — so will need to do some short-term borrowing.

Suggests using the parking fund to fund development of the parking lot. Also suggests considering doing the drainage work through the sewer funds.

Says some portion of the project cost can be paid from revenue generated by the center’s programs.

Says have plans to address long term maintenance as well as the capital cost of building the facility.

Wilson thanks everyone involved in the team for their hard work.

Minutes off consent agenda … along with …

With those exceptions, the consent agenda is approved.

Approved as amended. (Fiske was at the meeting.)

Braithwaite says want clear procedures on display of videos of juveniles — make sure their identities are obscured.

Fleming wants more policy clarity about who can and who can’t see body cam footage.

Fleming asks for more detail on how much money CCS is actually bringing in.

Amended to have Rose (former contractor) pickup the remainder of this year, and potentially the remaining two years of the contract.

Revelle says not happy with the project — says too large for the site. Says would overwhelm the Willard House property next door.

Fiske says this will provide an extraordinary public benefit — a Class A office building downtown — something the city desperately needs. Says city has lost a lot of businesses to other communities that had such space to offer.

Says niche retailers have kept downtown thriving and they need the 500 office workers who’ll be shopping and dining each day.

Says this building will someday be a landmark in our town — like the Carlson Building and the Marshall Field building.

Wynne says it’s a beautiful building, but it’s the wrong site. She’s going to vote against it as well.

Wilson says sometimes the city buys property, sometimes it sells it. Says hopes the money from this will help improve city parks.

Rainey says there won’t be any harm to the adjacent properties. These developers are very responsible, she says, and the development will be very good for small businesses.

Fleming says she’ll support the project. Agrees with Wilson that should reserve the sale proceeds for improvement to parks.

Approved 6-2 Wynne and Revelle vote no.

Rainey moves to refer the project back to Planning and Development after the Council has its affordable housing discussion on Oct. 30

Fiske … says she’s been working on an office development for downtown for eight years.