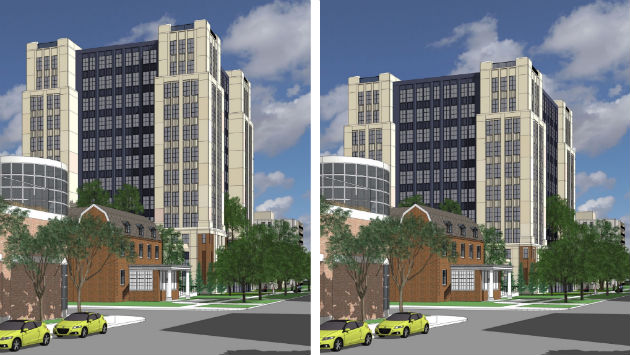 Here’s a recap of our live coverage of tonight’s Evanston City Council meeting, which is scheduled to include discussion of a proposed office building on Chicago Avenue downtown.

Says he has the right to apply for other jobs. Says has seen no decline in his service or its quality.

Alderman Tom Suffredin, 6th Ward, says he apologizes for indelicate language in his 6h Ward newsletter. Says isn’t looking to do another evaluation of the manager.

Representatives of Evanston Own It report on their support of the summer youth program and other activities. Making new contribution of $7K to summer jobs program and $1K to the Officer and a Gentleman Program. Several churches have contributed funds to the programs.

Junad Rizki says everything here is a mess.

Ray Freedman says should use public comment to foster dialogue.

With those exceptions, consent agenda approved. So the 1714 Chicago Ave. office building development was introduced on the consent agenda and will be up for a possible final vote in two weeks.

As detailed in our coverage of the Planning and Development Committee meeting, the developers at that meeting proposed reducing the height of the building from 13 to 11 stories, providing all 74 public parking spaces now in the surface lot on the site in the office building and leasing spaces in city-owned garages for parking for the office building’s tenants.

Suffredin asks re pickup and dropoff.

Community Development Director Johanna Leonard says have talked to ride share companies to geofence for pickup and dropoff. Says have suggested limits on Ridge Avenue and certain other locations.

Fiske … asks for dog beach update to HSC … and wants HSC to look at special events that want to use parks but don’t have a connection with an Evanston non-profit… and what they’re charged.