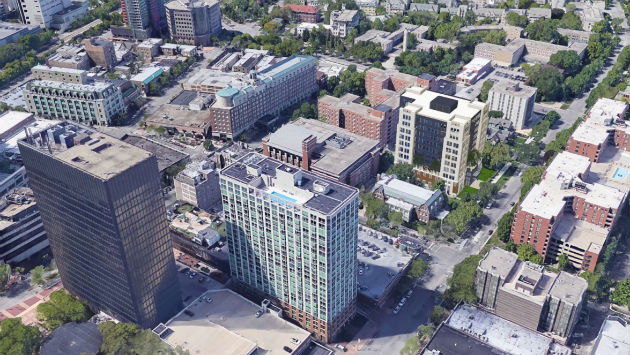 Here’s a recap of our live coverage of tonight’s Evanston City Councl meeting at which aldermen are scheduled to get an update on the construction and financing of the new Robert Crown Community Center and take a final vote on whether to approve a planned 11-story office building on Chicago Avenue.

The meeting is scheduled to begin at 6 p.m. (There are no Council committee meetings tonight.)

It took until 6:18 p.m. to get all the aldermen into the room. Meeting called to order then.

Parks Director Lawrence Hemingway says the city got about 575 students for the Mayor’s Summer Job Fair over the weekend. Says that’s down a bit from last year, apparently because of all the sporting events last weekend. City is planning to hold another job fair soon. Date TBD.

Mayor offers condolences to Muslim residents in wake of New Zealand mosque attack last Friday. “We stand with you because you are our friends …”

Expects to reduce operating deficit for new center compared to existing one, and also set aside $250K a year for long-term maintenance.

Had planned to bond $16.5M this year… now with expecting $1M additional from Friends of Crown … looks like bonding amount will be $15.5M. Says that should save $800K+ in projected interest over the life of the bonds.

Mayor asks for background on the letters of intent from major donors.

Storlie says initial letters were developed some time ago. Now working to revise them into legally enforceable agreements.

Mayor says appreciates that are trying to get long term revenue for the center.

Storlie says expects MOU with Friends to go online next week, a couple of weeks before planned Council vote on the agreement.

City Manager Wally Bobkiewicz says several private groups raise money for city projects and the city has no memorandum of understanding with any of them.

Says the upcoming MOU with the Friends of Crown may provide a framework for future work with other organizations.

Council votes to receive and file the report.

Says right of reverter proposed is reasonable and have satisfactory language for it.

Says closing would be June of this year, reverter deadline would be September 1, 2020, to start work on foundation.

Alderman Judy Fiske, 1st Ward, says has been very happy with the response from the development team to issues raised. Says they’ve been flexible and positive, extraordinarily so.

Says concerns about damage to historic buildings shouldn’t be an issue. Says the new Hyatt Hotel was built with a party wall to the landmark building next door.

Suggests separate votes on map amendment and the planned development.

Says Woman’s Club is both a banquet hall and a meeting space. Says banquet hall doesn’t conform to the existing R6 zoning.

Says the WCTU is proposing to rent out space in the administration building — it’s an office building in the back yard. Seems to make it appropriate to have office use on the parking lot site.

City Attorney Michelle Masoncup says rezoning of adjacent parcels hasn’t been noticed or reviewed by staff. Would object to doing that.

Fiske makes referral to Plan Commission regarding potential rezoning of the adjacent properties.

Johanna Leonard, community development director, says staff could examine those issues. If decide there needs to be a change, then would refer the issue to the Plan Commission.

Fiske says rezoning the library lot is not spot zoning, despite what some opponents have claimed.

Says proposed building fits in very well on its site.

Says building will bring in $1M+ in property taxes for all taxing bodies a year.

Says can anticipate an additional $2.1M in revenue to downtown businesses from the office building tenants.

Says original building proposal was ugly, the current design is a beautiful builidng. “We’ll be very proud of it going forward.”

Alderman Melissa Wynne, 3rd Ward, says she regrets having voted for the RPP for the development.

Says the development just can’t fit on the lot.

“Who builds an office building without tenant parking?” she asks.

Alderman Don Wilson, 4th Ward, says having office space downtown makes a lot of sense. But the space does have some significant challenges.

Says shouldn’t be doing something that makes the environment worse. Says feels like this will make the situation worse than it is.

Says while did originally vote for it, cannot support the current proposal

(Given that Alderman Eleanor Revelle, 7th Ward, has previously indicated she’s opposed … it appears there’s no way the rezoning can get the seven votes it needs, with Wynne and Wilson stating tonight they’ll vote against it.)

But doesn’t want to end up with a hole in the ground, an unfinished project.

Bobkiewicz says are blending several roles here … council as property owner and as land use approver.

Alderman Peter Braithwaite, 2nd Ward, says issue of alley safety — if alley is unsafe now — makes him afraid — says he has some alleys in west Evanston where people are being shot and killed. Says have asked for lighting, etc. Asks police chief how many shootings have had in this alley.

Says he’s pro economic development because it expands the tax base. Says some businesses have called him and said taxes have doubled. One business owner called him today and said he’s moving to Skokie because of the taxes.

Alderman Cicely Fleming, 9th Ward, says she hasn’t been interested in going to the Willard museum because she had nothing to do for the freedom of black women.

Says the Willard plans to reopen the office building … why aren’t they concerned about the alley and safety for office workers in their building?

Says people say staff is great now when they oppose a development … but said staff was crazy when it recommended other developments.

Says aldermen are elected to make the decisions — staff only advises.

Says she remembers picketing against the Helmut Jahn building that replaced Wiebolts at Oak and Church.

Says don’t know how great we can be if we oppose everything we personally don’t like.

Rainey says met with some of the developers over concerns that developer doesn’t have the capability to do the project.

Says the current plan is a really good looking building.

Greg Stec, from the development team, describes projects he’s done in Downers Grove and in Chicago.

Says many of his projects have been affordable housing developments.

Says has the strongest development team ever.

Rainey says people aren’t supposed to be hanging out in alleys. Alley is a fake issue.

Says parking lot is basically vacant during the day.

Revelle says alley safety is on the list of things she’s concerned about. Her primary concern is that its a very special, sensitive site. Says height is signfiicantly greater than the neighboring buildings. Thinks the setbacks are insufficient. Says it’s not compatible with surrounding development.

Says she’s looking to the potential for the office building at 601 Davis.

Question called at request of Braithwaite.

Vote on the motion is 5-4 with Revelle, Wynne, Wilson and Suffredin voting no. Seven votes would have been required to pass because of the citizen petition against the map amendment.

This item is now moot. Won’t be addressed.

City manager says he’ll bring that back another night. No debate tonight.

Braithwaite … for high school student 16 and over … new job fair Levy Center, May 23