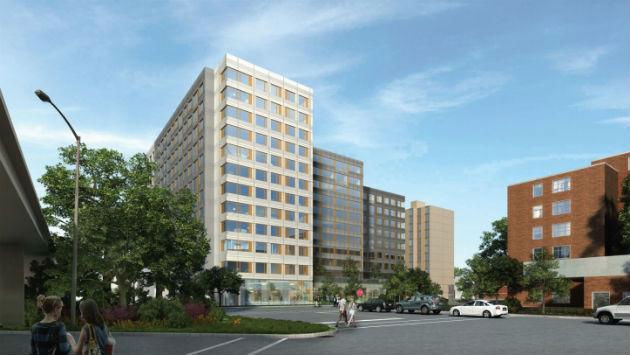 Here's a recap of our live coverage of this evening's Evanston City Council Planning and Development Committee meeting — where the big item for discussion is the proposed 12-story rental housing development at 831 Emerson St.

7:43 p.m.: The start of the meeting is being delayed because of the overflow crowd … City Manager Wally Bobkiewicz says arrangements are being made to provide video of the session to an overflow room down the hall from the council chamber.

Alderman Judy Fiske, 1st Ward, says the permission should be limited to studios where artists are selling their works.

Fails to get a second.

Fiske says she wants to have sales tax revenue from businesses operating downtown.

Alderman Ann Rainey, 8th Ward, says thinks would have to be doing retail sales to be able to afford the rent. Suggests getting feedback from artists about the issue.

Alderman Melissa Wynne, 3rd Ward, says have a bit of an example of this in the AMLI development on Chicago Avenue. Says there isn't a requirement that there be retail goods in that development — but there are a lot of artists in those units.

Vote is to move it to council without Fiske's proposed change, but to discuss it further there. Vote 5-1, with Fiske voting no.

ZBA and staff recommend denial. Vote is to uphold the denial recommendation … 5-1.

Wynne says would be limited to three dogs. Came as request from one of her constituents. Approved 6-0.

P 4 – Special use for Threads Boutique, 1304 Chicago Ave., as a resale establishment. Approved with suspension of rules for immediate action.

Wynne says its a children's resale clothing store (replacement for Hand Me Downs, which closed around the corner recently. Approved.

P 5 – Zoning relief for location of generator and for parking space location at 1140 Lakeshore Blvd. Approved.

Wynne says generator would be behind a brick wall — better than location that is anticipated by the ordinance. Says meeting the setback rule for the parking would require cutting down trees. Approved.

Says the site needs more environmental cleanup than any other site Focus has worked on.

Regina Henry, of the Sherman Gardens co-op development, says residents of her building got only one vote in the petition against the project (because it's based on ownership and the co-op entity, not the individual co-op residents qualify to vote under the terms of the city's petition ordinance).

Diane Petersmark, another Sherman Gardens resident, says the site should be used for affordable housing … not for "transient" students.

Tina Paden, 1122 Emerson St., says there's too much congestion now with the E2 development down the street.

Alderman Ann Rainey, 8th Ward, says she's surprised by presentation tonight by Gail Schecter. Asks where she was when city approved kitchen conversisons for former hotel at Hinman and Main.

Says its like senior citizen home where don't have children either. Says students should be  protected class. Says surprised to have heard that statement. Says she's supported the group for 20 years. But that was so threatening that she's embarrassed that that organiation has come here with that.

Alderman Judy Fiske, 1st Ward, says have had many community meetings. Says its the wrong building for the site. Says it's not a building the city has asked for or needs. Says it pushes the limit of downtown to the north side of Emerson. Says it want to do that should revisit the downtown plan. Says never have looked at that block before.

Suggests this could be the location for an office building instead.

Says will vote against the project.

Alderman Don Wilson, 4th Ward, says this isn't a micro-unit affordable housing project. Says there's probably a market for student housing — says he lived in a private student building when went to college — didn't move there because was looking for quiet. Says doesn't think this is the right spot for the development.

Alderman Ann Rainey, 8th Ward, says she thinks its the perfect use, great need, good location. Says anything built there, short of a three story underground parking with no balonies would appeal to people in that neighborhood. Almost every project we've dealt with there was overwheliming objection to the development.

Says Sherman Gardens is a very densely populated compound that turns in on itself — its an enclave.

Says the new development is a fabulous idea.

Says people claimed the B&Bs that Prizker built were going to be wild party sites — and there've never been parties there.

Alderman Melissa Wynne, 3rd Ward, says she plans to vote against the project — doesn't like the change from C1 to C1a — says its one of the most dense zoning categories in the city — and the developer wants to exceed that. Says a C1a development — built to code would be like AMLI — about 60 feet tall.

Says she objects to the density — 440 students — would be an enormous size dorm.

Says might work someplace in Evanston, but we haven't had the discussion about that.

Says the Plan Commission made a terrible mistake … as did the staff.

Wilson says reviews of other buildings by the developers in other towns have caused some difficulties in those commuities.

Alderman Mark Tendam, 6th Ward, says he likes the project, thinks it will work. Says it should be attractive to international students. Should take some of the pressure off existing student housing neighborhoods.

Vote is 2-4 … Fiske, Wynne, Wilson and Holmes vote no. Project goes on to council — where it would appear it won't have the six votes required for approval.