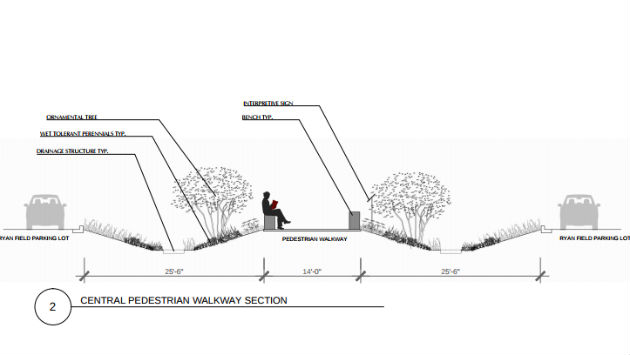 The meeting was scheduled to begin at 7:15 p.m.

Only two items are on the committee's agenda — a special use request to redesign the parking lot at Ryan Field … and a discussion of a possible new neighborhood plan for the north end of downtown.

Says parking lot has deteriorated and has no drainage.

Also planning to add ornamental fence along alley side (similar to one planned for Isabella along Rocky Miller field.

Says will work with the city regarding possible paving of alley.

DiAngelo says the alley requires drainage improvements — need to discuss those with city staff and the MWRD.

Laurie McFarland, one of the neighbors, says so greatful for partnership developed with Northwestern. Says was long, drawn-out process, starting in January.

We've always wanted to have an open conversation, she says. Praises Alderman Revelle for helping arrange meetings with city staff and NU.

Says now over 90 percent of the neighbors are thrilled with what's being proposed toay and encourage you to accept it.

McFarland says proposal now would have continuous barrier — no pedestrian access from the west. Concedes there were mixed views about that among the neighbors.

Robert Meltior, 1619 Jenks, says alley should be made one way — to cut down on speeding.

Says buses are idling in the parking lot at all hours. Says its not monitored property, only monitored when residents complain.

Says buses are supposed to be on Ashland not in the lot.

Says NU is the only Big 10 school without published tailgating rules.

John Black, 2651 Eastwood, praises NU for listening to residents and modifying the plans. Concerned about plan for permeable water retention vaults. Suggests seeking waiver on that.

Alderman Ann Rainey, 8th Ward, says she's never seen so many happy neighbors in the room in her life.

Asks more info about alley paving. Heard NU is going to contribute $800K. Will there be special assessment on abutter?

Rainey says she understands the neighbors have no intention of paying their share.

DiAngelo says NU has had to shoulder the burden on some other alleys abutting NU property.

Rainey says she wants the alley issue to go to A&PW before gets approved.

Says she's concerned about financial committment on part of the city.

Says people who want alley to be one way will find that one-way traffic enourages speeding.

DeAngelo says the figures are self-shielding. Says they don't need the mechanical cutoffs used in the past. Also are "incredibly more sustainable."

DiAngelo says he's not in charge of that program. Says now run by the school's chief of police and making major improvements to on-time performance and rule compliance.

Says parking lot project will include a bus turnout along Ashland which should eliminate need to have them park in the lot.

In response to question from Alderman Mark Tendan, 6th Ward, DiAngelo says design of lot is intended to get water back in the ground rather than running off into the sewer system.

Proposal, as revised, is approved unanimously

City Manager Wally Bobkiewicz says planning to have a special meeting of the Planning and Development Committee on April 18 to begin work on this.

No substantive discussion of it tonight.