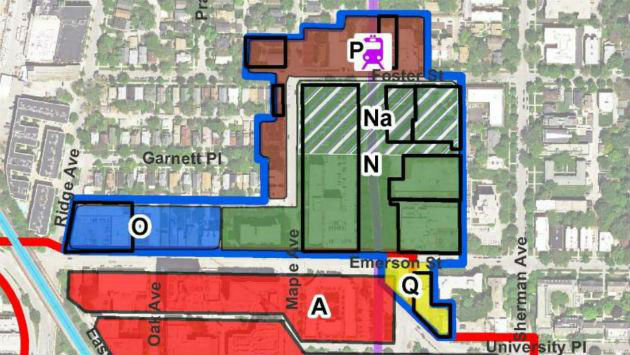 The meeting is scheduled to begin at 7:15 p.m. A packet with information on tonight’s agenda items is available online.

Four items on tonight’s agend — including approving a new plan for the north end of downtown and a planned development at 831 Emerson St.

P 1 – Petition to disconnect a portion of the 6th Ward from the Skokie Park District.

Alderman Mark Tendam says the residents in effect have been double taxed. Says the Skokie Park District has agreed to the proposal

Alderman Eleanor Revelle says the city owns several parcels in the area. Would make the city join in with the residents.

Tina Paden says three buildings her family owns are included in the plan area. Says nobody talked to her about it — just to the owners of the larger properties.

Says was told her properties were smaller and unlikely to be redeveloped. Says she’s worried about eminent domain — since it was used to redevelop the Research Park area adjacent to her house at 1122 Emerson.

Brown says only want to sell if receives adequate compensation for his investment. Says worried city could try to come in and take his property while under-compensating him.

Rainey says eminent domain isn’t going to happen these days. Says city has no ability to force anybody to sell their property to a private developer — regardless.

Alderman Judy Fiske, 1st Ward, says initially started this driven by block between Maple and Sherman and Emerson and Foster. Says she doesn’t agree with some of the additional areas added. Says she’s really uncomfortable with crossing Foster Street — need to make a hard edge for downtown. Foster is part of a small neighborhood largely of single family homes.

Doesn’t want to go west on Emerson either — likes the existing strip retail there at the corner of Ridge.

Alderman Wilson notes that this doesn’t amount to a zoning change — unless further action is taken.

Alderman Holmes says the plan is important as part of the city’s push for more affordable housing. Says works out much better if there’s a plan, rather than doing it piecemeal.

Fiske says next year sophomores will be required to live on campus. Says would like to see the Gaffield Place area return to conventional owner-occupied housing. Says there has been talk of redeveloping the Englehart Hall dorm. Says that’s another reason why planning is a good thing.

City Manager Wally Bobkiewicz says the Englehart piece of this is very critical. The development pressure on the neighborhood with the sophomores on campus will make for a very fluid situation.

Larger questions will be ones the new council will take on — but hopes committee will focus on sending a message tonight.

Says it’s important to pass the plan tonight to send a signal about what we want to do.Wy

Fiske moves to limit the plan scope to from Emerson to Foster and from alley west of Emerson to Maple.

Wynne says community attended a lot of meetings with the boundararies the proposal calls for. Says don’t understand would lop those properties off.

Says plan would create an appropriate transition zone. Says reducing the scope would cut the legs out from under the planning process.

(Proposed maps as early as a year ago included the larger area.)

Wynne moves to hold the proposal. Says aldermen need to study the proposal and “drive the neighborhood more.”

Diane Petersmark, from Sherman Gardens development, says would rather have a park over there, but I think this is the best of a bad situation and she supports it.

Jean Henry, says property now is an eyesore. Realize something will be built there. The latest proposal is 1000 percent better than than the first one. But its still not making her very happy. But its so much better than it was before, let’s go with it, though she won’t be happy with it. Doesn’t think can do any better.

Wynne asks re rental rates and the sides

Says those developments have 700 SF one BR units.

Says have required other developers to push back from the property line.

Says can’t get a person with a stroller past a street light and something else. Says thinks congestion is terrible. Says this is a bad design — creating too

Wynne says still thinks it’s too much of a shear wall.

Fiske says Emerson was widened the year before she came on the council and parkway was removed.

Says agrees with Wynne that the building is too dense.

Asks what would be able to do to the design if didn’t have to make the contribution to the affordable housing fund.

Anderson says structured design and the economics of the project to comply with the affordable housing.

Of course there are offsets if that’s reduced

Fiske. but if somebody gave you $2.4 million — what could you do.

Anderson, could be some offset re sidewalk and density.

But says have to create a differentiator … the size of the units is key to that.

Fiske says decisions city makes (regarding inclusionary housing rules) has impact on what get in developments.

Asks whether those are marketable?

Anderson says its definitely the trend in the industry, sees several buildings like that in Chicago — its a new trend in Chicago and nationally.

Rainey asks staff to provide info on typical size of units. Says all the info now seems to be talking about smaller units — nationwide. Says Council should get some of that literature.

Vote to introduce … appears to be 4 to 3 vote … Fiske, Wynne and Revelle vote no.

More info to be provided at next City Council meeting.