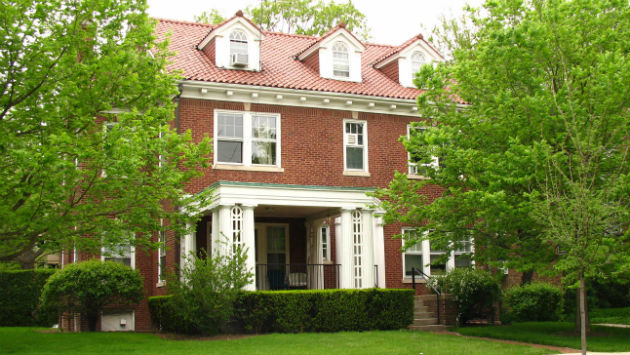 The meeting is scheduled to begin at 7:15 p.m. A packet with information on the agenda items is available online.

The aldermen are scheduled to consider a recommendation from the Preservation Commission to designate a building at 1726 Hinman Ave. a city landmark over the objection of the property’s owner, the Sigma Chi Foundation.

They’re also expected to take another look at whether the city should give Community Partners for Affordable Housing $579,000 in city and federal funds to buy and rehab a two-unit building as a subsidized rental property. That proposal was criticized as too expensive when it was last considered by aldermen on April 24.

Alderman Ann Rainey, 8th Ward, says item P3 – the landmark status for 1726 Hinman has been postponed until the committee’s next meeting on June 12 and the request of both the applicant and the property owner.

Carla Spencer says its very hard to afford housing for her four children as a single mom. Now has an affordable home under a CPAH program. Says her kids now are thriving.

Chuck Robb, 1941 Jackson, says CPAH helped him through the process of getting an affordable house. Says without programs like this the character of Evanston will change. Says his neighborhood has slumlords — shouldn’t be like that, people should be able to have a nice place.

Tina Paden supports the tenant-based rental assistance program. Praises city staff worker on the program. She has several apartments in the program.

Lee Smith, 1632 South Blvd., vice president of CPAH board, says the group has a proven track record in the city with both home ownership and rental housing.

Alderman Don Wilson 4th Ward, says he’s having difficulty with the cost. Wants to have the greatest impact for the funds. Says gives him pause to dedicate the $579,000 for just two units.

Says circumstances may change, not necessarily convinced it will work for 99 years, or that there won’t be additional costs.

Alderman Judy Fiske, 1st Ward, says she thinks 99 years will get as close to perpetuity as we’re likely to see. Says the three-bedroom units are really needed for larger families.

CPAH Executive Director Kim Ulbrich says they’re working on a four-unit rental project in Highland Park, says the city there is providing $450K for the project with Lake County providing another $300K+.

Says a recent project in Evanston, funded by a legal settlement arranged by the state attorney general, produced 10 units — seven rental and three ownership units — at a cost of $1.5 million.

Says there’s a great need to help people who are working but only making 60 to 80 percent of median income.

Wilson says he’s concerned that its helping only two families rather a larger number.

Savannah Clement, housing policy and planning analyst or the city, says some people, perhaps social workers, will never be able to afford market rate housing in Evanston. This program provides an option for them.

Ulbrich, in respons to question from Rainey says if tenants get increasing income they can stay in the unit, paying more rent.

Rainey says that means the units won’t actually be providing a subsidy then.

Clement says under the HOME program they’re required to pay 30 percent of income in rent — which often means people want to move.

Rainey says people who aren’t subsidized are paying a whole lot more than 30 percent for rent. Says under this program people can stay in a lovely renovated property when they no longer need the subsidy.

Wilson asks if have data tracking how program has worked for other organizations over a longer period?

Ulbrich says HOME program has been in place for a long time and has been successful across the country.

Rainey says her inclination is that there’s a desperate need for immediate rental housing for families … single moms with a few kids …needing housing now … and that the tenatn based rental assistance program is what htey need.

Says her inclination would be to divide the program up give half to Connections. Says she keeps hearing about people having kids in Evanston schools but being uprooted and sent to Des Plaines for housing.

Sarah Flax, of city staff, says city now has capacity to do some of both.

Says over three years has about $121K of HOME funds that has to go to “bricks and sticks” projects.

Alderman Melissa Wynne, 3rd Ward, says sees the value of providing some permanence to a family, says she’ll support the CPAH program and the TBRA program as well.

Flax, in response to question from Wilson, says have to have a property address to commit the funds to by July 31, or lose part of the HOME funds.

Wilson says he’s concerned that it appears that the rehab cost will be $100K per unit — which seems high.

Alderman Robin Rue Simmons, 5th Ward, says sees value of having long, stable housing — has seen that among people she cares about. But there also is a tremendous need for emergency help, she says.

Flax says city has 10 families in the TBRA program now and new proposal would add another 10. Says have a waiting list of 75 families.

Vote on P1 … approved on voice vote. No votes against.

Betty Bogg, head of Connections for the Homeless, says the program is targeted to families with children in Evanston schools.

For most part, people are able to transition to market-rate housing after the two years of the program. Says would be helpful to have a third year for some of the families.

Says waiting list now is six families, but just reopened the list. Tend to reopen the waiting list toward the end of the school year, so can meet needs before school reopen in the fall.

Asked by Rainey what is most needed, Bogg says really need a $15 minimum wage so people can afford housing at market rate.