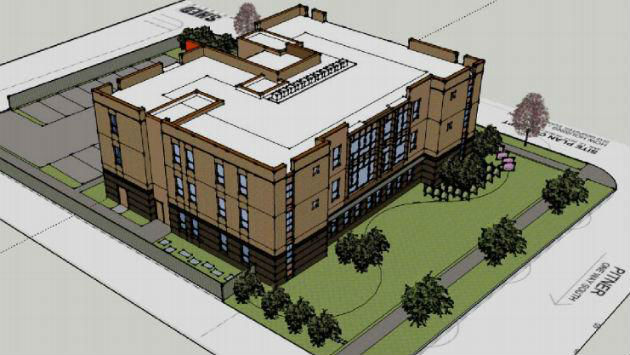 Here’s a recap of our live coverage of this evening’s Evanston City Council Planning and Development Committee.

The committee is scheduled to vote on providing $550,000 in funding for a proposed 16-unit affordable housing development at 2215 Dempster St.

So each person would have 45 minutes to speak.

Alderman Peter Braithwaite, 2nd Ward, says there’ve been a number of community meeting about the project.

Says neighbors believe the size and scale of the building doesn’t fit the neighborhood. Also traffic and sewer concerns.

Nobody said they were in favor of the project. Says he’s a big proponent of affordable housing but doesn’t think this is the right place for it in Evanston.

Suggests four to eight townhouses instead at 1829 Simpson.

Casey Chrisitianson, co-president of League of Women Voters, supports the HOW project. Says will have a great impact on the families serviced. Says HOW has a proven track record.

Delores Robinson says she is a HOW client and supports the project. Says she want from having a six-figure income to being homeless. Says HOW has really helped her get back on her feet.

Numerous other speakers on the HOW proposal.

Savanah Clement of city staff says that the R5 zoning of the property would permit at five story building, but the developer is proposing only three stories.

Says city funding would be about 10 percent of the total project cost.

Fiske says has two Housing Authority of Cook County developments in her ward. Says they were presented as housing for Evanston residents — and that wasn’t how it worked out.

Says she’s not comfortable with this project — because not convinced it will actually serve Evanston residents.

Alderman Melissa Wynne, 3rd Ward, says its a worthy project, but it seems remote that Evanstonians will be living there in the first five years.

Says concerned that spending half a million of Evanston’s affordable housing funds on it.

Sarah Flax, housing and grants administrator, says of people on the wait list there likely are some Evanston residents now.

Says Emerson Square has project-based support — and sometimes get Evanston residents for that.

Says one of the hardest things is to make a wait list that takes care of everybody’s needs. What do you do about someone who’s already been forced out of Evanston.

Alderman Eleanor Revelle, 7th Ward, says she believes a lot of people on the wait list are Evanstonians or former ones.

Alderman Robin Rue Simmons, 5th Ward, says this doesn’t meet the most urgent need for families to have affordable housing — because the units are too small. Says haven’t had any non-stakeholders in the sponsoring organization come to support this project.

Says the city doesn’t yet have a strategic plan for spending its affordable housing. Says need to move beyond being segregated. Says cost of of segregation is very expensive — and is costing black and minority residents their future in Evanston.

Says he talked last week about how are a segregated community. Says needs to break out of the status quo.

Says this project would house women with children. There are a lot of single parent households in the community.

People make connections with the ommunity because of the people who are here.

Says the city funding is a lot — but a small portion of the total for the development. Says he plans to vote for it.

Says in her ward at Howard and Chicago where developer wanted to add more affordable housing to a project — would have cost $250,000 a unit.

Wi\ynne, Wilson, Rainey, Revelle vote in favor of the project

Fiske and Rue Simmons vote against.

Resident of Hill Arboretum housing speaks in favor of the restaurant project.

Several other people speak against the project.

Jim McKee, 3rd Ward resident and friend of developer, says restaurant owner is successful developer who has taken vacant properties in Evanston and turned them into successful project. Says property involved was build in the 1920s and was originally zoned B1 and now is asking them to take the zoning back to that.

Says would provide unique affordable European food. Says they’re not asking for any help from the city to building out a nice restaurant in a commercial building that’s been vacant for 10 years.

Rue Simmons says the last viable uses of the building were commercial — a snackery and a beauty shop. Says the zoning change just blocked development. Says want amenities in the ward that are consistent with those in the rest of Evanston.

Says some of the reasons offered against the project are embarrassing. Yes he’s not black, she says, he’s an eastern European immigrant.

Says he responded to her concerns — improved the design — says will provide an experience to improve the park.

Says owner make a presentation at her ward meeting and answered residents’ questions.

Says staff told her there isn’t a rat problem in the neighborhood, despite was opponents claim.

Wilson says property has been vacant for a long time. This seems like an interesting opportunity.

Fiske says she supports the project. Has always wished there was something going on in the building.

For introduction an action.

Braithwaite says the building has a swim school, a child day care, there’s a business that provides services for adults with special needs.

Says most of the kids in the alternative school now have to go outside of the school to be educated. Says can cost $50,000 per student.

Says would give the kids access to amenities at the high school and to participate in after school sports.

Says ETHS will be renting, not purchasing the property and it will remain on the tax rolls.

Wilson moves to refer the issue to the Plan Commission

Rainey says she’s opposed to putting it into an I2 district.

Fiske says it should be referred to the Law Department as well as the Plan Commission.