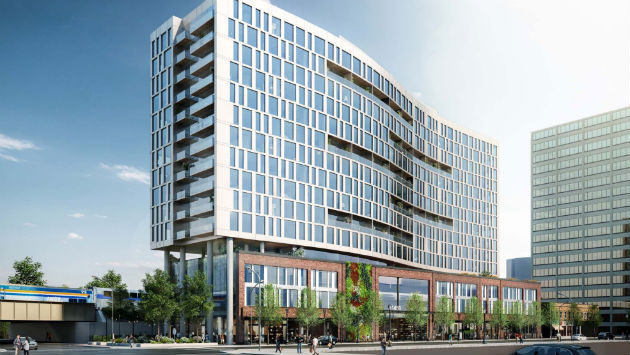 The meeting is scheduled to begin at 7:45 p.m. A packet with information on tonight’s agenda items is available online.

With the 16-story Albion Residential development on tonight’s agenda, the Council Chambers are full — with spectators and would-be speakers at public comment.

Alderman Don Wilson, 4th Ward, notes licenses are for one year — would have to be renewed.

Steven Starr, the property owner, says he’d be happy to discuss the proposal with neighbors before next committee meeting.

Committee votes to hold the item until Oct. 23 meeting.

Joshua Huppard, neighbor says the existing Nic’s has peak business at noon and so does the Sarkis restaurant next door.

Alderman Tom Suffredin, 6th Ward, says lack of off-street parking is big issue — says they don’t have proof of permission from the owner of the lot.

Says thinks neighbors OK about it except for the lack of parkign.

Vote is to hold the issue until the Oct. 23 meeting.

Ed Carrella of Tommy Nevin’s and Pete Miller’s restauratns says have seen decline of traffic in the area — need development to increase business.

Lee Katz, a 39-year-resident and business-owner, says he favors the project, says it will be far more diverse that some of the single family neighborhoods in town.

Wendy Pollack, 1410 Oak, says she’s not opposed to density — but doesn’t like this project — says it’s out of scale, inhuman, really ugly.

(Moved for discussion by Wilson and Rainey.)

Have moved parking entrance from Sherman Avenue to the alley — and will widen the alley. 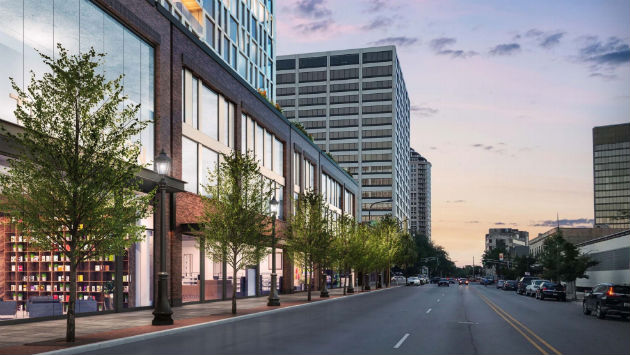 A street-level rendering of the Albion development.

The development will provide a 2,700 square foot pocket park at the south end of the site.

Yule says in response to concerns from neighbors about getting affordable units immediately. Says each unit in the building cost about $330,000. Says the fee-in-lieu is about $2.9 million — that would translate to eight to nine affordable units on site.

Says now proposing to construct 15 affordable units on site — which will have a value of about $5 million.

Says wants to help start a conversation about the crisis of affordable and workforce housing.

Says will waive move-in fees for employees of the 10 largest employers in the city. Also will offer to maintain the public park on the south side of Lake Street at Sherman Avenue.

Says will not increase burden on Fire Department .. .and will reduce number of calls for police services.

Clare Kelly says have over 1800 people who’ve signed a petition against the project.

Says would undermine sense of community and negatively impact aesthetic appeal of downtown.

Seth Weinberger, former chair of Zoning Board of Appeals, says 2009 plan sought to preserve just four blocks — and this is one of them.

Asks how cheaply are we going to give up one of the last character-giving blocks in Evanston.

An architect, Greg Williams, claims the building design will condemn the retail spaces to failure.

Flax says can’t tell developers what size units to provide. Says the developer has come back with a proposal to integrate affordable units into the development.

Says can’t see how this development would negatively impact our segregation problem — all the research he’s seen says the opposite.

Says it want to make things affordable, don’t want to have great big units that would be extremely expensive.

Alderman Judy Fiske, 1st Ward, says the lack of a ziggarat setback at the south end creates an unpleasant wall.

Says this is a really tough project because it’s on a site that’s very difficult.

Says concerned about businesses that can’t afford the price of new retail space.

Says thinks city has gone way too far in be accommodating to developers.

Rainey says have heard all sorts of misinformation about the development. Says to dismiss the 15 units of brand new affordable housing is terrible. Says if it happens it will be a historical event and we should embrace it.

Says the taste police are out. Says the character of Evanston used to be Marshall Fields, Rothchilds Wiebolt, the Varsity theater … a bunch of little restaurants. People thought we were going to die if any of those closed. Then along came Old Orchard and all those stores closed.

Along came the Research Park that turned out to be a miserable failure. Then we talked about the Hill development on Maple Avenue. Everybody was going to leave town because it would be gridlock. Was going to be a horrible mess.

Life will not come to an end and the character of downtown will not change for the worse if we build a building you don’t like, Rainey says

Says the good outweighs the bad on this project. It will provide housing for lots of people who will take their money and shop at all the little shops.

Alderman Robin Rue Simmons, 5th Ward, says she’s less than enthusiastic about the design of the project — but says the 15 units of affordable housing meets the goal. Also hard to dismiss the economic activity that would support the business community downtown.

Says would like to look at reworking public benefit. Says there’s already a Divvy station not too far away. Challenges developer to meet MWEBE goals and local hiring goals. Would like to see preference for Evanston residents in the affordable units.

Sarah Flax says there would be a local preference — that the city has contracted to have such a list maintained.

Revelle says having affordable units in the building is really important. Says have never quite defined what mean by public benefits. Says she likes the partnership wtih ETHS to provide training in the buildig trades.

But is troubled by the scale and mass of the project in that location, which should be a transition to the lower density buildings to the south. Also concerned about the ziggerat setback issue. Would like to have the developers address those concerns and make the project more appealing.

Wilson says he doesn’t live in Evanston because of the buildings –but the character of the people.

Says he’s talked to a lot of people about the issues he has with the plan. Says that plan would allow developers to take down existing awesome building that he loves in the city — in core downtown could build 20 to 25 story buildings as of right.

Says this currently isn’t the most attractive block.

Says if there’s more housing supply, that will help stabilize the increases in rents.

Wynne says there are some positive aspects of the proposal — like the affordable housing. Says she’s troubled by the mix — says there’s demand for family housing — would like to see a different mix.

Says the development starts at the land price. Depending on what the council does, a marketplace will be established for land in Evanston. Says the mass and density is too large for the site. Think’s southern end shouldn’t be as tall as it is.

Says the block needs to be developed — but not convinced this is the right development.

Says there’s a lot of false information being spread by the opponents. It’s not true that the city has been focused on developing “luxury micro-units.”

Says rumors in community that groups are receiving money from the developer is simply not true.

Says happy to get answers about occupancy rates and size of units. But stick to the facts.

Wynne moves to hold in committee. Rainey says rest of council needs an opportunity to discuss the proposal.

Fiske second’s Wynne’s motion to hold … which is all that’s required to hold the proposal in committee until Monday, Oct. 23