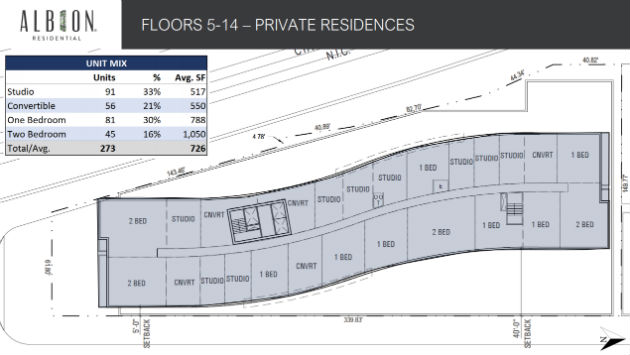 The committee is scheduled to vote — among other things — on introduction of the 15-story Albion Residential planned development at 1450-1508 Sherman Ave.

Packet with information on tonight’s agenda items are available online.

Held at request of applicant  until Nov. 13 meeting.

Erin Rosen, says the project is attractive, has human-scale podium, and will add residentsto the downtown area — which downtown businesses need to survive.

Trish Connolly says the developer could afford to double the number of affordable housing units proposed.

Chris Pappas, owner of Agea Spa across the street, worries about parking problems for customers and employees during construction. Says has been a mess this summer with Rotary garage closed and Fountain Square construction underway. Says lack of parking for two years would be devastating for his business. Says construction noise will also harm the quiet that his customers expect.

Janet Larson, 1501 Oak, asks for more building inspectors for project — says there were issues at her building.

Will White, 1501 Oak, says seems to be a done deal — doesn’t like to think that — but didn’t think Donald Trump could be president either.

Sara Schastock says high-rise projects are springing up like mushrooms after the rain. Says should revisit the downtown plan.

Developer Andrew Yule says since start of review has reduced height by 21 feet and made several other changes, including providing a ziggaret setback at the south end of the building. 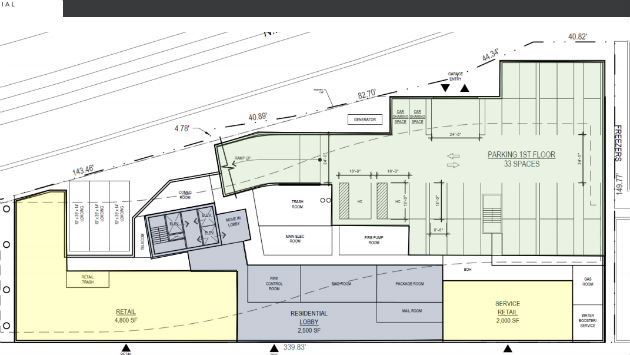 A rendering of the revised first floor design for the project.

Yule says the average size of convertible units will be 650 square feet, not the 550 shown in the presentation packet.

Says plans to provide training for students from the ETHS geometry in construction program. Says it’s something they’ve done at a project in Pittsburgh.

Kiera Kelly … attempts to play video of small business owners who she says oppose the development.

Video fails to play. She attempts to recap what they said.

Alderman Ann Rainey, 8th Ward, says one of the main reasons for rent rates being high is a low vacancy rate.

When it fall belows 5 percent you’re in the danger zone, she says. Now vacancy rates are around 4 percent. So landlords can get pretty much whatever they ask in rent.

She says best way to keep rents down is to generate more rental units.

Says units built in the 50s and 60s are more affordable than those built more recently.

Says developer came with an upscale class A rental project. Says she supports Connections for the Homeless’s proposal, but developer would probably be smarter to just comply with the ordinance by providing the in lieu fee.

Alderman Don Wilson, 4th Ward, says he’s gotten a lot of correspondence both for and against the development.

Says he’s bothered by objections to “migrants and transients.” Says talk like that would be a strong deterrent to coming to the community. Says really stunned at some of the insulting language about people who would live here.

Says the cost of the affordable housing will raise the rent cost for other residents in the building.

Says you can’t tell me that somebody building condos in a four or five story building on this site will be affordable — they’ll be completely unaffordable.

We don’t have enough housing, people need a place to live in Evanston. Says this development will not tear down any existing housing.

Says there’ve been lots of meetings, lots of opportunities for people to get their voices heard.

Suggests moving the project forward to the full council

Says complaints started out as aesthetics and zoning but has moved into affordability and race.

Says the 15 on site units is great. Says the additional public benefits are OK but not enough. Should be more thought about the size of the inclusionary units.

Says have affordable housing that’s transferring without even making the MLS. Says wishes there had been the same enthusiasm for segregation and disinvested neighborhoods before this project came up.

Rue Simmons says it appears there is fear mongering. This building is not displacing any black residents. No one is being displaced. Should focus on what’s real. Says there’s a real opportunity to challenge the developer for an improved public benefit.

Says will continue the discussion on affordable housing next week.

Says this is a very difficult site, as a former small business owner, concerned about not blocking traffic and how streets are used. Says she’s not convinced we need more rental residential buildings downtown. Says we need office buidlings. And says there’s a waiting list for condos, though there may not be financing for developing new condos.

Says she’s stunned at how large the proposed buildings are — says need to really think about that.

Says thinks there’s a better building for this block that the developer could do — could be lower, but still make them a lot of money.

Says need to get over the 2009 downtown plan, but need to have fresh discussion about what we want downtown.

Alderman Eleanor Revelle, 7th Ward, says we’re kind of floundering because we don’t have an agreed upon vision of where we’re going to go with the downtown.

Says it’s really a big balancing act to get development we do want to bring greater tax revenue to the city and schools, and affordable housing is really exciting. But says she’s hung up on the zoning issues and what the building is going to look like.

Says doesn’t think the scale and mass of the project is appropriate. Doesn’t provide transition to residential areas from the core downtown.

Alderman Melissa Wynne, 3rd Ward, says has asked staff to prepare a memo of what all the aldermen think are appropriate public benefits.

Says thinks the project is very compelling — the 15 units of a ffordable housing are so much ore than have ever had before. Sez she’s impressed with the willingness of the developers to listen to what’s been said and make changes.

But can’t support this building in this location. Says thinks should follow the downtown plan. She voted for it. Says many aspects of it still hold true.

Says need to have clear message to development community — now we’re sending out static, she says. Need to send clear message about what we value.

Says she’s appalled by most of the tall buildings that are being proposed. Would end up with a hodge podge.

Wilson moves to send to council for introduction.

City Council to start in a few minutes.