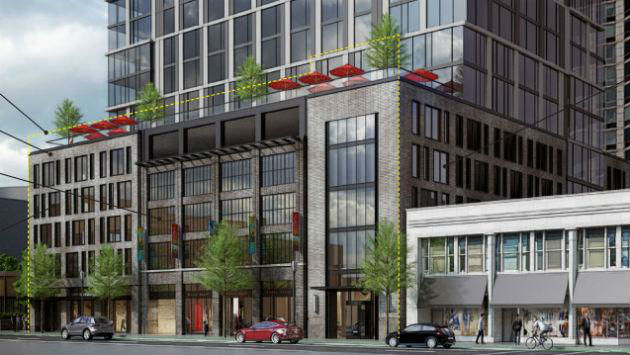 The big item tonight likely will be what’s not happening — the developer of the proposed 601 Davis tower has requested a postponement of review of the projec until the committee’s next meeting two weeks from tonight. The committee is expected to grant the postponement.

Request by Alderman Cicely Fleming, 9th Ward, who’s not here tonight, to hold the item until the next meeting.

That delay is approved.

Alderman Braithwaite recommends suspension of the rules to give immediate approval

That would set sidewalk minimum width at 12 feet and change the minimum lot size per dwelling unit from 350 to 400 square feet.

Alderman Ann Rainey, 8th Ward, suggests holding the proposal in committee — wants to be able to talk about it to Wynne first.

Rainey says she wants to propose some changes in the C1a District on Howard Street.

She suggests holding the proposal. Wynne agrees. So, it’s held.

Johanna Leonard, community development director, suggests inclusionary housing subcommittee would have first meeting at 7:30 a.m. Friday. Fiske objects to that time. Says should be meeting in the evening so its easier for the public to attend. Nyden says will reschedule — date to be determined.

(Wynne suggests people who want to talk about 601 Davis should wait until the issue is before the committee.)

Tina Paden asks about changes in the “three unrelated” requirement. Says it’s not enforced now. How would enforce it if change it, she asks?

Asks whether vacation rentals will be inspected. Says her rental properties were inspected 14 times last year. Doesn’t think the four inspectors on staff will be able to handle it.

Sue Loellbach, of Connections for the Homeless, says city needs more coordination and a broader plan for affordable housing.

Alderman Tom Suffredin, 6th Ward, asks what city could do to incentivize people to tear down an existing garage and replace it with an accessory dwelling unit.

Leonard says there are some examples from California of models for what can be built, and can have the proposals fast-tracked.

Alderman Eleanor Revelle, 7th Ward, says she’d like to see an ordinance that would legitimize the rental of accessory dwelling units to non-family members.

Says she thinks it would be difficult to require that they be rented to low income people.

Rainey asks how many coach houses there are. Leonard says will try to investigate that. Wynne says a lot in the third ward — some are rented out — not always to family members — but a lot haven’t been upgraded and sit vacant.

But says she doubts they’d actually be rented  to poor people. Wynne says in her experience they’re usually rented by single people who have low income and often become long-term tenants.

Wynne says she agrees with Revelle that should legitimize renting coach houses.

Suffredin says the coach house idea can also provide additional income to seniors who want to stay in their homes.

Fiske says city is not doing a great job of inspections or enforcement on this.

Says need to have a conversation about rooming houses. Says some in her ward work beautifully.

Says they’re inspected and licensed and work well. Suggest that offers an aging-in-place option as well.

Wynne says she agrees that that topic should be brought forward. Says this is essentially reversing the pattern of the 1950s — where tried to crack down on rooming houses.

Fiske says she’s concerned about a trend …says apartment building in her ward that had two bedroom units now being converted into three bedroom units …says that’s not a good way to go.

Wynne says wonders what moving sophomores onto campus will do to demand for rental housing.

Revelle asks for a white paper report on rooming houses.

Wynne says in the 50s or 60s the city barred rooming houses from R1 zones, but grandfathered in existing ones — some of which lasted until the 1980s.

Rainey says had thought that investor-owned properties shouldn’t be allowed to run as Airbnbs. But then said if E2 or 415 Howard had two or three Airbnbs — what would that matter. Says her thinking is muddy now. Says thinks landlords think can make more money by renting to Airbnbs and students. Maybe should just license them for a year and see what happens. The license is for a year and we can always change our mind, she says.

Revelle refers to background in packet on vacation rentals. Says she’s inclined to thing Airbnbs should be owner occupied.

Wynne says Madison, Cambridge and Boulder limit to owner occupied. But St.Paul, Minnesota doesn’t. Says its an issues should keep an eye on. Inclined to just observe it for now.