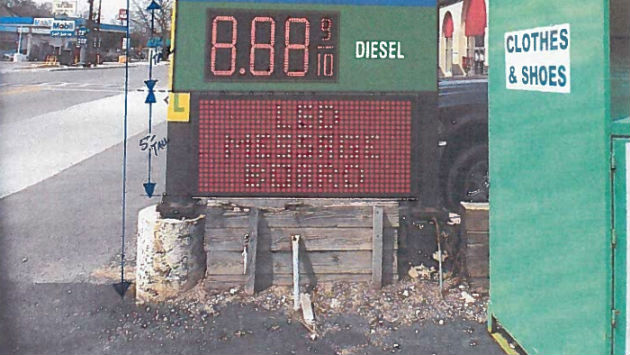 An appeal of a city staff denial of a variable message sign at the Citgo gas station on Green Bay Road is one of the items on tonight’s agenda along with changes to off street parking requirements on campus and a special use permit for a brew pub on Ashland Avenue.

Station owner, Syed Saqib, says has invested substantial funds to upgrade the business. Says its difficult to have any signage on the building because the canopy extends so close to the building.

Says the existing sigh that display gas prices has existed for years and is in an variable electronic sign format.

Says McDonalds and the Marathon station both on Howard Street are also using similar signs.

Simmons says a new owner could change that. Says excited that he’s investing in the community, but can’t support this sign.

Alderman Don Wilson, 4th Ward, says he would support hearing the appeal, but not confident would get support from the committee.

Committee votes 5-1 against accepting the appeal.

Sarah Flax, housing and grants administrator for the city says this is a replacement for services previously provided by Open Communities.

Says the city has had landlord tenant services provided by a contractor since 2012. City had previouslly provided by city staff before layoffs.

Says MTO and the Lawyers’s Committe has been providing similar services in the City of Chicago and some south suburbs for years.

Says goal is to reduce evictions and unfair situations for tenants — but also provide support for landlords. Provides landlords and tenants with education about their rights and responsiblities.

P 4 – Brew Pubs as special use in MXE district

Simmons says business owners presented at community meetings. Have years of experience successfully operating restaurants in other communities. Says will provide an event space like no other in the ward — she supports the proposal. But doesn’t like the proposed signage. Is advised that that requires a separate permit.

P 9 – Special use for concrete wall for ComEd at 514 Custer Ave.