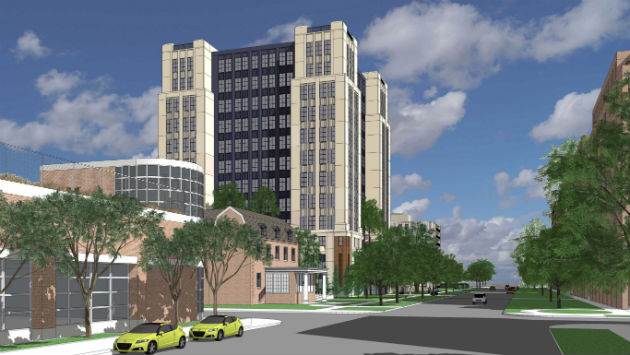 Here’s a recap of our live coverage of tonight’s Evanston City Council Planning and Development Committee meeting. On the agenda — a planned 13-story office tower downtown, a single-family home on a small lot in northwest Evanston and special use permits for two restaurants.

Rue Simmons says she supports the proposal, says would meet zoning requirements and will add additional housing to the neighborhood.

Approved with suspension of the rules for final action tonight.

Approved with suspension of the rules for final action tonight.

Neighbor on south side of property says it’s been going on for three years.

Another neighbor complains that the developer turned down his offer to buy the lot for $25,000.

Vote is to table to a future date TBD.

Janicki says would plan to lease 50 spaces in the Church Street garage.

Alderman Judy Fiske, 1st Ward, says looked at various options for parking. Says suggestion was that all 74 spaces in the surface lot would be replaced and tenant parking would be in the Church Street garage. Says city has done that before with other developments. Says there is plenty of parking available in the garage.

Says she appreciates trying to work this out — balancing a number of different things on the project — and thinks its a good conclusions.

Traffic engineer says don’t have to back from Church Street to get to the loading dock.

Wynne asks how soon expect to be fully leased. Greg Stec, developer says expects to be fully occupied within 18 months of completion. Says could have 300 to 500 employees — depending on who the tenant companies are.

Alderman Don Wilson, 4th Ward, says the alley has been used as a cut through for library patrons and others. Those concerns are real.

Janicki says the new building will control pedestrian traffic onto the crosswalk.

Wilson says realistically cars won’t stop for stop signs. Have to be mindful of the site lines to be sure the driver will stop.

Alderman Ann Rainey, 8th Ward, says alley is there is a problem whether its an office building or a restaurant. Says people will have to adjust if a building is built.

Wants to hear from staff whether changes make the building more acceptable to staff.

Johanna Leonard, community development director, says staff didn’t have any interaction with the developer since the last P & D meeting.

Fiske says when she asked to have the proposal held over at the last meeting she wanted to see the parking and height issues addressed.

Fiske says the building will make for a much safer route for pedestrians to take.

Says has proposal to relocate handicap pedestrian access for 1738 Chicago Ave. from the alley to Chicago Avenue.

There are 589 spaces for the public in the garage. Generally over 200 plus spaces are available.

Says wants the option of switching parking to the other garages — to give the city more flexibility to use any of the garages to use the demand.

Evanston Place, has about 300 spaces they own in the garage and those, Velan says, are only about 30 percent leased — so there may be options for obtaining extra parking there.

Fiske says deveoper has spent almost a $250,000 on the plans so far. Her suggestion was to bring the revised proposal to the committee and getting some feedback before redoing the entire application as amended at Council in two weeks rather than holding it in committee.

Lorie Halick, 1738 Chicago Ave., asks about property taxes and what current revenue is from parking lot.

Other opponents of the development say it should be sent back to the start of the project review process.

Fiske .. says zoning on Orrington face of the block is D3 and D2, so rezoning the parking lot wouldn’t be spot zoning.

Says since the exising R6 zoning would allow an even taller building that’s being proposed now. Says office building would be a quiet, cleaner use for all of its neighbors — especially compared to a downtown residential building with a lot of move-ins and move-outs. Office building also likely to be quieter at night than a residential development.

Says this developer has been patient and easy to work with, to sit down with everyone and try to solve problems with the understanding that this is a unique lot. Says often don’t see that from developers.

Says understand some people would like to start the process over again. Says that’s not the proper process and hasn’t been how other development have been handled. Says this is somethig for the Council to consider.

Alderman Eleanor Revelle, 7th Ward, says appreciates that developer has come back with more of what have asked for. Says doesn’t think aldermen appreciated how difficult it would be to design an office building for this site. Appreciates that its now closer to what the purchase and sale agreement asked for. But she’s still worried about the minimal side yard setbacks. Says will doom historic trees on WCTU property and cast a deep shadow on the campus.

Says $4 million to the city for the sale would be nice, but not enough to justify the compromises required.

Wilson says DAPR and Plan Commission did good job of laying out the issues. Says don’t think would change the outcome to send it back. Shouldn’t keep putting the developers through more hoops. Wants to have complete materials well before the next meeting, if are going to vote then.

Wynne agrees with Revelle. Says regrets her vote in favor of an RFP for this site without understanding fully what could have been built. Something else may come to the city later. Don’t think should sell it for residential use, though.

Motion to introduce carries 5-2. Wynne and Revelle vote no.