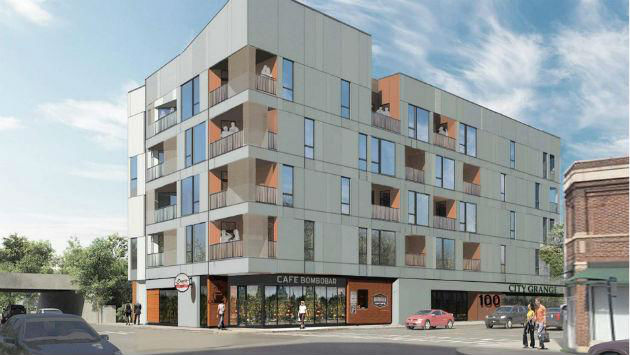 Here’s a recap of our live coverage of tonight’s Evanston City Council Planning and Development Committee meeting, at which the developer of the City Grange project at 100 Chicago Ave. will ask for additional time to start construction.

Aldermen are also expected to discuss a proposal to conduct a test of closing Elgin Road to traffic downtown.

The meeting is scheduled to begin at 6:45 p.m. A packet with information on tonight’s agenda items is available online.

Shawn Jones, attorney for owner of 2650 Sheridan Road, pleads for restoration of curb cut at the property.

Alderman Eleanor Revelle, 7th Ward, says previous owner of property, who requested the subdivision, was informed that would not be able to maintain the curb cut. Says prior owner submitted plans for two homes with detached garages at rear. Says alley is a good 20 feet wide. Says there are about a dozen garages on the alley now. Says it’s not a difficult alley to navigate, wouldn’t be hard to get out of garage.

Says he’s inclined to allow replacement of the curb cut.

Revelle says house to the north doesn’t have access to the alley.

Approved for introduction with only Revelle voting no.

P3 – Extension of time for planned development at 100 Chicago Avenue.

Alderman Ann Rainey, 8th Ward, asks for immediate approval. Says there’s a plan to eliminate the second floor event space to add more housing. Will be asking for change to the planned development to add two more residential units, which needs to be approved by the Plan Commission.

Wilson supports suspension of the rules, so the approval doesn’t lapse.

Approved, with suspension of the rules for introduction and action tonight.

Vote is 6-1 with Suffredin voting no.

James Engleman speaks in favor of the project

Carl Klein objects to the idea — especially the idea of building a new civic center on the potential vacated roadway.

Attorney for 800 Elgin condo building objects to the proposed closure of Elgin Road. Says about half the residents are students, mainly at Kellogg. Says main access to the building is from Elgin Road.

Says there could be improvements made to pedestrian access to the area.

Says closure would be a taking violating their constitutional rights

Carol Bass, of 800 Elgin condo board, says nobody contacted them about the proposal — insulted by that, she says.

Michael Miller, condo owner at 800 Elgin, says never heard about until management notified him this morning.

Says building in total pays $20 million in taxes. Claims cutting off access to Elgin Road would cut the value of the property in half. Says proposal is idiotic.

Linda Young, 1864 Sherman Ave., says doesn’t like the idea of closing Elgin Road, but thinks could be some improvement for pedestrian safety.

Says she’s been working on some issues for many years. Says two different ideas involved. Says she’s not interested in talking about moving the Civic Center.

But says she’s known of problems getting across Elgin Road that people at Sherman Gardens and 800 Elgin have complained about. Say cars go fast there — several people — including her– have been hit crossing Elgin Road.

Wants to see if can do redesign to make it safer. Says are more new buildings coming in to the area along Emerson that will increase the number of residents trying to walk downtown.

Says need more information before making a decision about actually closing the street. Are just at the beginning of the discussion.

Not necessarily in favor of a pilot closure this summer. If it’s not going to be a win-win for everyone, she won’t want to go forward with it.

Says the bike lane project on Chicago Avenue, which has now won awards, took a long time and years of conversation to develop.

Alderman Wilson, 4th Ward, says everybody could agree that the road could be safer. Want people to bring forth ideas.

Says doesn’t think closing the road is the right way to go, but would like to see the area made safer.

Alderman Melissa Wynne, 3rd Ward, says wants to apologize. Residents shouldn’t have heard about it this way. Should have had commuity meetings with people who live on Elgin Road. But should be looking at transportation issues. Says should be able to do computer modeling of traffic patterns without actually closing the road.

Says this is her route from Hinman Avenue in south Evanston — doesn’t want to lose it.

Says do need to improve crosswalks and other pedestrian safety issues.

Says should do a survey about safety there. Doesn’t favor closing the road.

Alderman Eleanor Revelle, 7th Ward, says there are a lot of benefits to a road like Elgin Road, but appreciates Fiske for raising the need to make it safer.

Fiske suggests having meeting in Parasol Room — wants to look at whole stretch from Maple to Chicago avenues.

City Manager Wally Bobkiewicz suggests starting with a community meeting and come back with a proposal about further staff work after that.

Wilson, fair conclusion now that closing the road is off the table, he asks.

Fiske says yes, at least regarding the idea of a pilot this summer. Says this an opportunity to look at the safety issues and make it better.