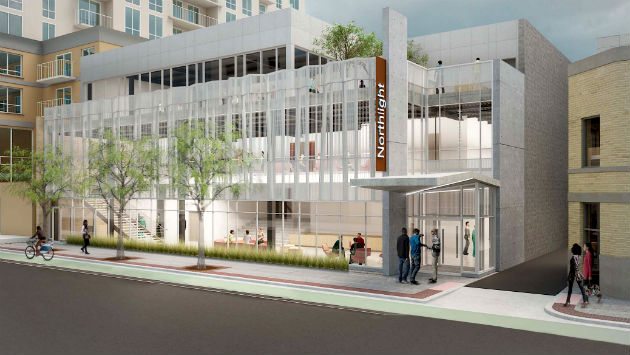 Here’s a recap of our live coverage of tonight’s Evanston City Council Planning and Development Committee meeting at which aldermen are scheduled to consider two proposed planned developments on Church Street — one for the Northlight Theatre, the other for the YWCA.

The meeting is scheduled to start at 6:45 p.m. A packet with information on the agenda items is available online.

Alderman Peter Braithwaite, 2nd Ward, supports the proposal and says the YWCA has done an amazing fundraising job for the expansion project.

YWCA board member says she once was a client at what was the called the battered women’s shelter. Says is forever grateful for what YWCA did for her and her daughter.

Says organization needs expanded facilities. Says they turn away almost 1,000 women and children a year for lack of space now.

Other YWCA backers speak in favor of the expansion plan.

Architect says, in response to another question from Revelle, that has revised the design to provide more variation in the materials used in the revised design.

Alderman Judy Fiske, 1st Ward, says a house formerly on the site was the location where Abraham Lincoln stayed when he visited Evanston. Suggests should add some recognition of that in the new building. (The house itself was moved to Dodge Avenue.)

Amended to suspend the rules to recommend final approval tonight.

P4 – Special use for animal kennel at 1245 Hartrey

Aldermen Judy Fiske, 1st Ward, and Melissa Wynne, 3rd Ward, say they both have dogs who go to the business, Unleased in Evanston.

Linda Tate says she leves nearby and is a big supporter of the project.

Bob Best says he lives about a block and a half from the theater … says feels like he’s won the lottery … its a win-win for everybody.

Amy Morton, owner of The Barn restaurant at the Northlight site — says she’s a big proponent of the project. Says it will bring culture and creativity. Sas the city needs Northlight for it’s programming for the arts for youths.

Says so many restaurants have empty seats — this will be the very best thing for restaurants and downtown retail.

Other speakers also support the project.

Wynne says pleased the Northlight didn’t give up and is returning to Evanston.

For referral to Plan Commission.

Sarah Flax, housing and grants administrator, says the current proposal only addresses coach houses … other types of ADUs would be considered later.

Alderman Judy Fiske, 1st Ward, says she’s concerned about proposal to eliminate parking requirements — especially in areas like the 1st Ward that are already “parked up.”

Wilson says should give the Plan Commission the option to make its own recommendation,