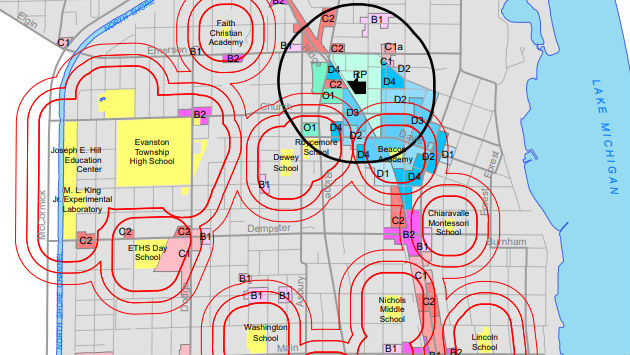 Here’sa recap of our live coverage of tonight’s Evanston City Council Planning and Development Committee meeting, at which aldermen are scheduled to discuss a new ordinance that would allow cannabis dispensaries in certain zoning district.

The committee is also scheduled to discuss a zoning map amendment to clear the way for a senior housing development on Howard Street.

Mostl comments focus on proposal to offer commercial events at the Welsh-Ryan Arena … a subject that’s not on tonight’s committee agenda.

It’s expected to be discussed at the Oct. 28 meeting.

Back to the cannabis item.

Says there’s a special use approval process — which would give the City Council more discretion about what to approve.

The current proposal only excludes elementary, middle and high schools.

Fiske says she’s not happy with the proposal — have to look at really carefully, she says.

Wilson suggests going ahead with introduction tonight — and get new maps before the next meeting.

Approved for introduction … with staff to come back with additional maps

Alderman Ann Rainey, 8th Ward, says it affects one block from Ridge to Barton. Will allow for the 60-unit affordable senior housing development. Says the new development will be on the tax rolls.

City Council to start at 8 p.m.