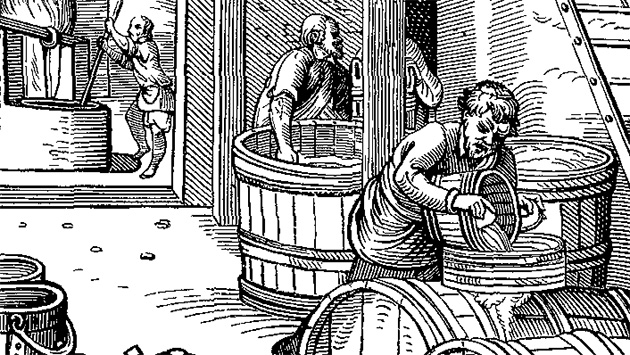 On an agenda packed with alcohol-related items, Evanston aldermen tonight are expected to vote to license the city's first brewery.

Temperance Beer Company, named to highlight the city's former role as a headquarters of the prohibition movement, hopes to set up a craft brewery operation at 2000 Dempster St.

Owner Joshua Gilbert says the project will expand the city's manufacturing base.

He plans to have a 2,000 square foot tap room with limited food service and 12,000 square feet of warehouse-like space for the brewery.

Gilbert is also seeking to raise the licensed production capacity of the new brewery from 465,000 gallons to 930,000 gallons a year as permitted under a recently adopted state law.

The Liquor Control Review Board recommended approval of the license at its May 30 meeting.

In addition, the City Council is scheduled to:

Top: A 16th century engraving of a brewery operation (from Wikipedia).

Update 6/25/13: All the proposals mentioned were introduced as part of the City Council's consent agenda Monday night and are likely to be routinely given final approval at the next Council meeting on July 8.