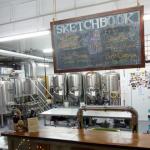 Ever since Sketchbook Brewing Co. opened its doors in Evanston last fall, its customers have had to walk down an alley to get their beer. But soon, they’ll be able to enter from the street.

Evanston’s only nanobrewery (that means a really small brewery) is partnering with Brew Camp, a supplier to home brewers, to make it easier on customers of both companies.

The alley location, on the east side of the 800 block of Chicago Avenue, will continue to house Sketchbook’s brewing equipment, but it will also serve as a retail outlet for Brew Camp.

Meanwhile, the Brew Camp location, at 821 Chicago Ave., will also serve as the new Tap Room for Sketchbook, where customers can fill their howlers and growlers right across the street from the Main Street CTA station.

Before all that happens, the partnership will spend most of the summer remodeling the Brew Camp location, while sales of home brewing supplies will shift to the alley that runs from Main Street to Kedzie Street.