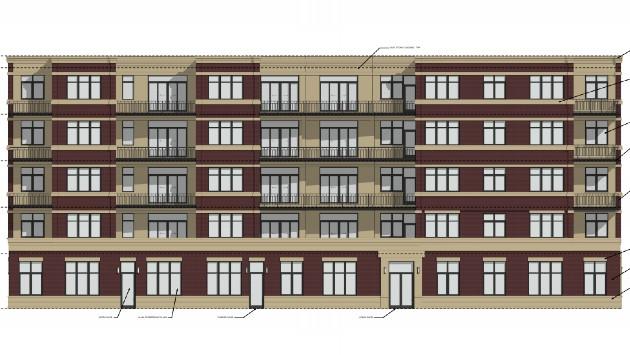 Brick balcony pillars on a proposed five-story planned development at 1555 Ridge Ave. that drew criticism from city staff have been stripped from the building’s design in plans to be presented at a Plan Commission hearing tonight.

The pillars were among several aspects of the design for the building that led the Design and Project Review Committee two weeks ago to forward the project to the Plan Commission with no staff recommendation.

With the pillars gone, Community Development Director Johanna Leonard says staff now is recommending that the Plan Commission give a favorable recommendation to City Council for the project — subject to further discussion with staff about “the aesthetic design of the building.”

The west elevation design when the project started the DAPR review process in January.

Developer Thomas Meador is proposing 68-dwelling units in the building — seven studios, 20 one-bedroom apartments and 41 two-bedroom units — along with 57 ground-level parking spaces. He’s prposing to include three on-site affordable units and make a $525,000 fee-in-lieu payment, in compliance with the city’s inclusionary housing ordinance.

The property is zoned R6, which would permit a building with up to eight stories. Meador is requesting site development allowances to reduce the building setback and landscaping at the north edge of the property and to provide an unenclosed loading berth

The property currently is used as a surface parking lot.

Coincidentally, Chicago Business reported Tuesday that one of those developments, a two-building, 120-unit complex called Monroe Aberdeen Place, has just sold for $66 million, a price that the paper said was probably depressed by anticipated increases in Cook County property taxes on commercial properties.

Update 2/27/20: After hearing testimony, and at the request of a resident opposed to the project, the Commission granted a continuance that postpones a recommendation on the project until the commission’s March 11 meeting.