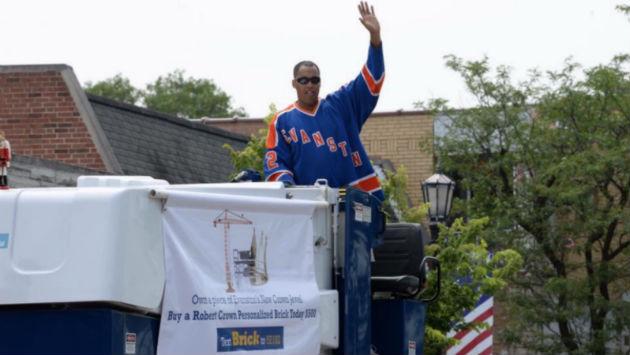 Friends of the Robert Crown Center and seven allied groups supporting the construction of the new library, turf park and community center sold enough $500 personalized bricks in their initial “Brick Bomb” campaign this week to raise $61,000 in just 61 hours.

The effort used the Moneybomb approach of sending mass emails all on one day from multiple organizations to encourage donating online and by mobile phone.

“We launched the campaign at Evanston July 4th parade and once they got an email or two this week, people jumped at the chance to buy a brick, put a personalized message on it, and own a piece of Evanston’s New Crown Jewel, “ said FRCC Board Member Dr. Raj Ghate.

The bricks cost a donation of $500 and will allow for three lines of text with a maximum length of 18 characters per line, including spaces. People can donate the cost of a brick simply by texting the word “Brick” to 52182 from their mobile phone or by visiting Brick.gesture.com online.

That text or link will take people to a secure site to make their credit card donation, and a follow up email gives people time to consider how to best personalize their brick.

As of Thursday night, 61 bricks were sold at a donation level of $500, raising $30,500, an amount that was matched by an anonymous donor. The total raised with the match stands at $61,000 and is growing by the hour.

“We are so excited about building our new, state of the art Robert Crown Library right there where more than 100,000 people visit each year so we can better serve every child and every person who wants library services close to their home and close to where their kids learn and play,” said Karen Danczak Lyons, Executive Director of the Evanston Public Library.

Ghate said the FRCC has already raised over $8.2 million of the $10 million initial goal to get the project to bid on construction documents, adding “If we could sell 500 bricks over the next few months, that could put us over the top, because every one of those donations will be matched by our very large anonymous donor.”

The New Robert Crown Library, Turf Park and Community Center is slated to be built at the corner of  Main Street and Dodge Avenue, and will feature a 6,000 square foot library, expanded day care and community art space, two full sheets of ice, a new gym double the size of the current facility and new turf fields.

Evanston, organizers say, is one of the few communities in Chicagoland that has no publicly available turf fields.

The library will not only house mentoring and tutoring programs for kids and job training for adults, but will allow people who do not have Internet at home to check out mobile Internet hotspots just like they check out a book.

Currently, 14 percent of Evanston homes do not have Internet, library officials say, putting kids on the wrong side of the digital divide at a disadvantage as more and more homework and research projects are directed online.

“Robert Crown will become Evanston’s largest mixing bowl, where people of all ages and walks of life come together to learn, play and grow,” said Ghate.