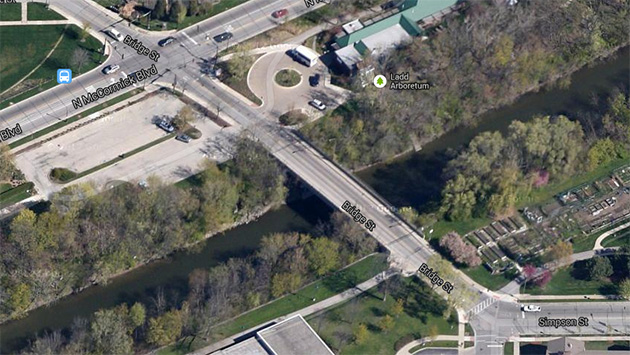 Work to rebuild Evanston's Bridge Street bridge over the North Shore Channel is set to start the day after Labor Day. Completion is scheduled for late November.

The Bridge Street bridge, in an image from Google Maps.

Work to rebuild Evanston's Bridge Street bridge over the North Shore Channel is set to start the day after Labor Day. Completion is scheduled for late November.

The pavement between McCormick Boulevard and Brown Avenue will also be reconstructed, which will require adjustments to existing drainage and utility structures.

The bike path south of the bridge will be realigned to tie into the crosswalk at the intersection of Bridge Street and Brown Avenue.

New street lighting will be installed within the project limits and the existing traffic signal at the intersection of Bridge Street and McCormick Boulevard will be upgraded.

The bridge reconstruction project is funded by federal and city funds.

The work will be done in two stages to maintain westbound traffic throughout the project with the south half of the bridge being rebuilt first. Eastbound Bridge Street traffic will be detoured north to Green Bay Road.

Pedestrian access will be maintained on one side of the bridge at all times and the North Shore Channel will remain navigable during the project.

The contractor for this bridge project is Illinois Constructors Corporation of Elburn.

The project is under the supervision of the City’s Engineering & Infrastructure Division. The City has hired Alfred Benesch, a consulting engineering firm, to oversee the construction activities.

The resident engineer in the field will be Thomas M. Carrato who will be directly responsible for all aspects of the construction. He can be reached at 773-444-7075. General questions about the project should be directed to Sat Nagar, senior project manager for the city, at 3-1-1.