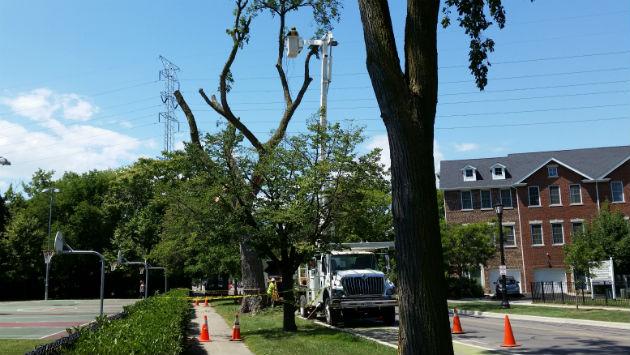 Evanston aldermen tonight voted to cut planned spending on a Dutch Elm Disease tree injection program by half this year as they tried to find ways to close an expected multi-million dollar budget cap created by the COVID-19 pandemic.

The injection program has been extremely popular with tree lovers in the city and has dramatically reduced the number of elm trees lost to the disease each year.

The city has typically treated a small number of trees each year with its own staff and hired an outside contractor to treat all the other trees every third year.

Continuing the full treatment program with a contractor would have cost just over $646,000 to treat more than 1,800 trees this year. By postponing half the work until next year the city anticipates cutting this year’s cost roughly in half.

Public Works Director Dave Stoneback said the delay would likely lead to the death of about 11 additional elm trees next year, above the average of 34 elms the city has lost each year despite the injection program.

But he said once the program was completed next year, the losses would likely return to the long-term average.

Alderman Melissa Wynne, 3rd Ward, initially spoke against scaling back the program, saying she was on the Council when hundreds of people showed up to support the injection program and convinced aldermen that it would be cheaper to inject the trees than to have to pay to have them all removed.

But after other aldermen, including Eleanor Revelle, 7th Ward, pointed out the size of this year’s savings brought about by the delay, she ended up voting for it.

Alderman Peter Braithwaite asked Stoneback whether staff could be trained to bring more of the injection work in house. Stoneback said that wasn’t an immediate option because people doing the work have to be licensed by the state to apply pesticides and, with state government largely shut down, no new licenses are being issued.

And while the city might eventually be able to inject more trees, “there’s no we we could take over so much that the city could avoid hiring a contractor,” Stoneback added.

Alderman Don Wilson proposed adopting the scaled-back program and his motion was approved on a 7-2 vote.

Despite the new focus on spending restraint, the aldermen, after posing questions to city staff, voted to approve other spending items, including: