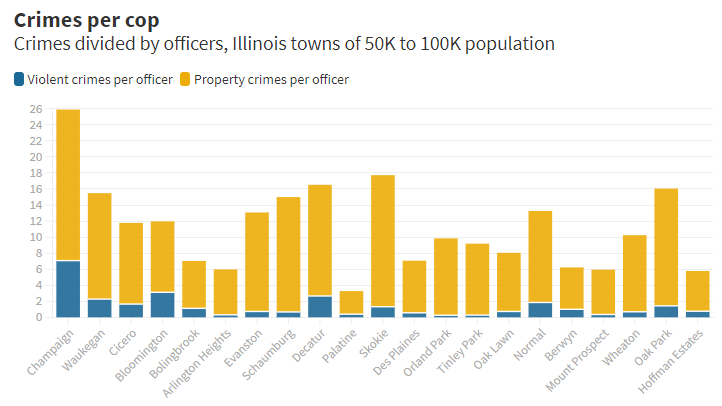 Evanston aldermen Monday hold a public hearing and discussion of next year’s budget that’s expected to feature calls by some residents to defund the city’s Police Department.

An Evanston Now analysis of FBI data shows that of the 21 Illinois towns with between 50,000 and 100,000 residents Evanston ranked 8th last year in the number of crimes reported to the FBI for each officer on the force.

On a per capita basis, Evanston last year ranked first in the number of sworn officers among those communities, with 2.12 officers per 1,000 residents.

It ranked second only to Berwyn in civilian police employees, with 0.74 civilian employees per 1,000 residents.

It ranked fifth among the communities in violent and property crime incidents reported to the FBI per 1,000 residents.

In a budget memo to aldermen, Police Chief Demitrous Cook notes that the number of officers on Evanston’s force has shrunk since the FBI data was collected last year from 157 to 146.

Assuming no changes in staffing at other police departments, that would drop Evanston to sixth place in the count of sworn officers, with 1.97 per 1,000 residents.

In his memo, Cook argues that Evanston has unique demands on its police force, given the presence of Northwestern University. However, the FBI data shows that two other Illinois communities with major universities — Bloomington and Normal — have lower per-capita crime rates than Evanston while employing fewer officers per capita — 1.59 per 1,000 in the case of Bloomington and 1.49 per 1,000 in the case of Normal.

On the other hand, Champaign, home to the University of Illinois, suffers from the highest crime rate per capita of any of the 21 towns and has only 1.32 police officers per 1,000 residents.

Of course other demographic factors, besides being a college town, may impact the demand for police services, and the FBI major crime data doesn’t capture the minor crime incidents or quality of life issues that police are often called to deal with.