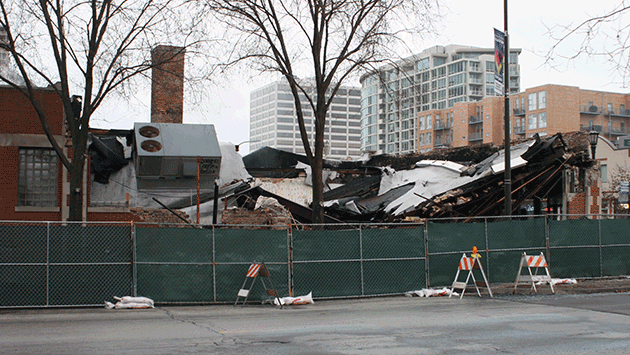 Evanston fire and building officials say the structure at Oak and Davis downtown severely damaged in a fire Sunday is a public safety hazard and will have to be demolished.

Inspectional Services Manager Jeff Murphy says the building needs to come down "as quickly as possible" but that he's working with the building owner's insurance company and their investigators to try to determine the cause of the fire first.

Fire Division Chief Tom Janetske says given the collapse of the building's roof, it's not even clear whether it will be safe enough for fire officials and insurance investigators to enter the building to try to determine the cause.

Janetske says firefighters were inside the Pine Yard restaurant fighting the blaze for only 10 or 15 minutes early Sunday morning before they determined that the fire had spread into the bow truss roof structure above the restaurant's dropped ceiling and that they'd have to get out for their own safety for fear the roof might collapse.

With several crews called in from surrounding departments early on to help in fighting the fire — using hose lines and aerial ladders to pour water on the building from outside, Janetske says they called for more outside help about an hour later to give some relief to crews already on the scene, especially given forecasts of rapidly falling temperatures.

Murphy said he's already been in contact with utility companies to do preparation work needed ahead of the building's demolition.

Electricity and water service has already been cut off, he said, and gas service soon will be.

The Wheel & Sprocket bike shop will still need a couple more days of dehumidification after getting a substantial amount of water in its basement. But Murphy said employees there are hoping to be back open by Friday.

What next for fire-ravaged downtown corner?