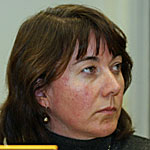 A plan by Alderman Coleen Burrus to lower the speed limit on Oakton Street to 20 miles an hour went down to defeat at Monday night's Evanston City Council meeting.

Burrus, whose 9th Ward includes much of Oakton, argued that the speed limit reduction was needed to provide safety for children attending schools along the street and to help residents who claim their walls and windows are cracking because of vibrations from cars and trucks going over rough spots on the aging pavement.

But other aldermen, including Don Wilson, 4th Ward, said a lower limit would just shift more traffic onto other streets which have similar problems problems with aging pavement and school zones.

Even a compromise proposed by Alderman Jane Grover, 7th Ward, to only cut the current 30 mile an hour speed limit to 25 miles an hour went down to defeat on a 5-4 vote.