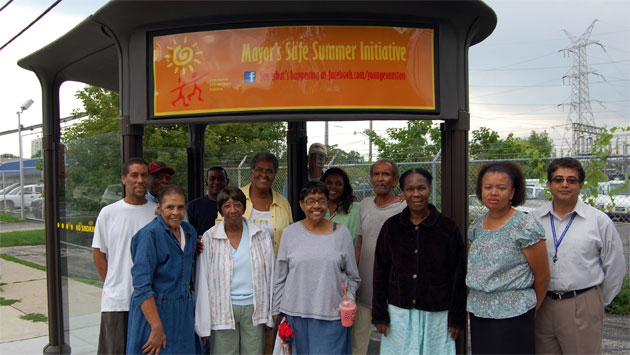 The first of what could be dozens of new bus shelters in Evanston has been installed on Emerson Street at Dewey Avenue.

Alderman Delores Holmes, 5th Ward, said she volunteered to have the first shelter installed at that location in her ward because residents of the nearby Blake-Robinson Senior Housing building who depend on public transportation need the shelter to be able get out of the elements during bad weather.

"This shelter is great for the residents," Holmes said as she stood with neighbors at the shelter, "We all welcome it."

Last September the city approved a contract with Creative Outdoor Advertising of Jupiter, Fla., to provide replacements for 13 existing shelters around the city and shelters at as many as 21 additional locations.

But work on the project stalled as aldermen raised questions about the ads on the shelters and their design during a discussion of possible shelter locations in March.

The test location on Emerson was made possible as part of construction that occurred earlier this year on the street that also included sidewalk extensions and intersection upgrades that allowed for the placement of the bus shelter on the south side of the street.

The objective of the pilot and proposed program is to provide the Evanston City Council the opportunity to directly observe the design, functionality and fit of the shelter. If the Council approves the shelter, the program will be expanded to include other areas identified through the city's Multi-Modal Transportation Plan.

If the shelters are approved by the aldermen, the company would install the additional ones at no cost to the city in exchange for the right to sell advertising on the shelters. The city would receive a potion of the revenue.