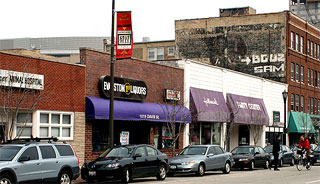 Storefronts in the 1000 block of Davis

Business owners who own their buildings don't like the downtown plan's limit on building height in the 1000 block of Davis Street. But a business owner who rents on the block told aldermen Tuesday night the limits are just fine.

The proposed plan, now being debated by the Planning and Development Committee, would limit buildings that front on that block of Davis to a  maximum of five stories.

But just across alleys behind the shops, buildings could rise as much as 18 stories. And just to the east, across the Metra tracks, they could be up to 25 stories tall.

Chris Mailing, who owns 1027 Davis and operates the Turin Bicycle shop there, said what's being proposed for the west Davis traditional zone is "highly inconsistent" with the wedding-cake style zoning used elsewhere downtown, in which greater height is allowed closer to the center.

"This is like a wedding cake with a slice taken out," Mahling said.

He argued that his block is in effect being penalized for its success. Because other sections of downtown have failed to live up to their financial potential, he said, developers found the cost to acquire property on those blocks less than it would have been on Davis Street.

Mahling, who organized last summer's downtown bike race, added, "In a world addressing global climate change, with less auto traffic and green transportation becoming very important. West Davis is the perfect place to have high-rise development because it is right next to the CTA and Metra stations."

The 1000 block of Davis is in the area labeled "J" on this map. A comparison of the proposed height limits across the downtown area can be found here.

Alan Zreczny, who owns 1012 and 1014 Davis and operates the Audio Consultants store there, said limiting the growth potential on the block also adversely affects his ability to run his business.

"A lot of people finance their businesses through lines of credit that are secured by the value of the properties they own," Zreczney said. "If my bank sees I've been downzoned, I'm going to havv a smaller asset to borrow against.

Scott Steinman, who owns the building at 1030 Davis and the Studiomedia Recording Company there, urged aldermen to "stand in the middle of the street and spin around. You'll see higher buildings all around." 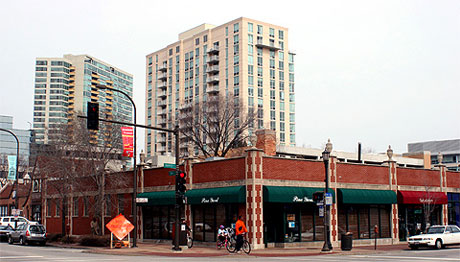 Highrises visible looking northeast from the Pine Yard restaurant at Davis and Oak.

"Our buildings are not really very charming," Steinman said. "You could take them away and have something much more charming in their place."

"There's office space concerns for Evanston. We're a great block for all that because of the easy transportation access," he added.

But Judy Fiske, who recently opened the Fit and Frisky pet shop at 1016 Davis and rents her store space, said the block "really works" the way it is.

"There's not one vacancy on this block," Fiske said, "and it has successful businesses we can feed off of," like the veterinary office across the street.

Fiske, who has worked on historic preservation issues and is planning a second run for 1st Ward alderman next year, said, "Parking on this block is wonderful," so customers can park nearby and don't have to carry the 40-pound bags of dog food the shop sells very far.

She said there's also no problem with store employees tying up meter spaces in front of the stores because there's employee parking behind the shops.

"If you allow development, you can say goodbye to small home-grown businesses like ours," Fiske said.

Although some of the business property owners had written to city staff several months ago to complain about the plan's impact on their area, Tuesday's committee meeting was the first time their concerns were publicly discussed.

The downtown plan will also be the subject of a special Planning and Development Committee meeting Dec. 4 and will be on the agenda for the committee's regular meeting Dec. 8.

More stories on the downtown plan