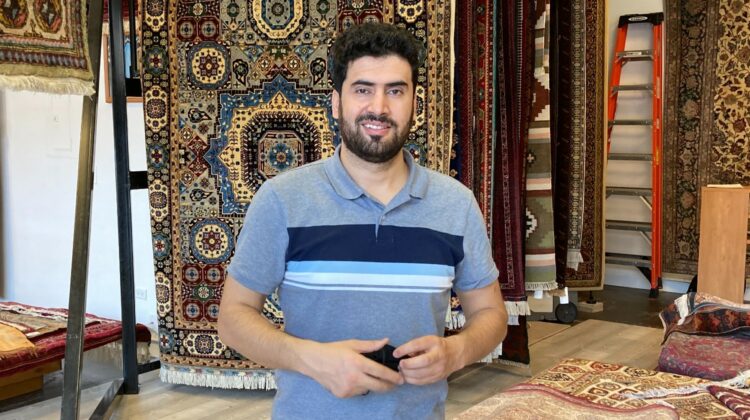 Right now, 31-year old Shams Frough should be concentrating on two things: the new business he opened at 900 Chicago Ave. in Evanston three weeks ago, and the medical school admissions test he plans to take next month.

The business is called Kapisa Rugs. Kapisa is the province in Afghanistan where Frough was born. He once served as a translator for the U.S. military. And while Frough has been in the United States for a decade, and is now an American citizen, he still has family members in his native country.

This morning, Frough talked with one of his brothers who, along with his wife and five children, made it inside the Kabul airport hoping to get a flight out … to anywhere.

“It’s a mess outside the airport,” Frough said. “My brother got in after waiting outside day and night.”

That brother worked for the Afghan government in intelligence, one of the few agencies which actually worked well, Frough says. So his safety is likely in jeopardy.

“There’s a minor chance of him being kicked out of the airport,” Frough says. It’s just wait, pray and hope that his brother can get the necessary documents to speed up his exit.

Another brother was in the Afghan military and was able to escape in a helicopter to neighboring Tajikistan the day Afghanistan fell to the Taliban. But now, Frough says, his brother is being held in limbo, almost as a “political prisoner,” with nothing certain on what will happen next.

There’s more. Frough has five sisters, all still in Afghanistan. One is married to a man who used to be a cook at a U.S. Army base.

“He’s eligible to come to the U.S.,” Frough says, “but how can he get in touch with the company he worked for to get a letter?”

Plus, he says, they are in “double pain,” because they have a child in need of chemotherapy, but there’s no way to get to Pakistan where treatment is possible.

Frough’s wife Liza, whom he met in Afghanistan, also has relatives there, and also has family members at the Kabul airport, hoping to be able to fly to freedom.

Frough was actually in Afghanistan at the end of March, to buy rugs for his new store. He’s proud of what he has to sell, his bright showroom full of rugs, and of his business model.

“My plan was to do something to help the economy” in his native country. Buying rugs provides income to the rug makers.

“I wanted to do something to help the people,” Frough says.

Frough says he understands the United States was not going to stay in Afghanistan forever.

“Twenty years is a long time,” he notes. “The U.S. tried to make a nation-state out of a troubled place. Lots of people died, so much money wasted,” he adds.

Frough also says the United States “turned a blind eye” to corruption in the Afghan government.

But he also says the withdrawal “could have been planned differently.”

By pulling out of Afghanistan completely, Shams says, the United States is losing military proximity to China, Pakistan, and Iran.

“Why leave such a strategically important place,” he asks, when a small force of perhaps 2,000 troops could serve as a “true deterrent” to the Taliban.

Now, he says, while the Taliban has said there will be pardons, it’s hard to believe.

“At night time, people are taken out and you don’t see them again. It’s a mess.”

Frough constantly has his cell phone nearby, to hear from his relatives. His medical school study guides sit on a shelf, but Frough says he’s too nervous to study.

“I’m not getting a lot of sleep. I have headaches,” he adds.

The med school admissions test is scheduled, of all days, on Sept. 11.

“If my family is safely out in five-to-ten days,” Frough explains, “it gives me time to study and take the test. Otherwise, probably not this year.”

“I definitely want to become a doctor,” says the University of Illinois at Chicago graduate. “That’s the plan.”

But the plan may have to wait. Frough watches the news every night, despite the grim picture painted of what’s happening in the country where he grew up.

“If it’s your family, you look at it no matter what.”

Update 4 p.m. 8/20/21: Frough says his brother and family, who were inside the Kabul airport hoping to be evacuated, have indeed been airlifted out. He does not know their destination, but hopes to find out soon.